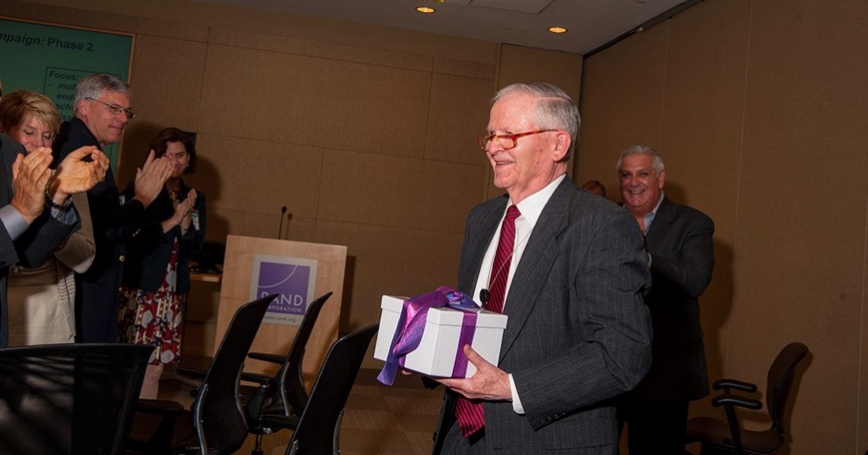 Frederick S. Pardee, a former RAND researcher, recently contributed $3.6 million to support the Pardee RAND Graduate School and to create its Pardee Initiative for Global Human Progress. This initiative draws on the talent and innovation of Ph.D. candidates and RAND research staff while advancing RAND's work in international development.

“I care about future generations—making sure that individuals live, with dignity, in a safe, sustainable, and secure world,” said Mr. Pardee. “I'm particularly interested in what's in store for humankind over the next 35 to 200 years. We must create innovative, multiregional solutions for a range of social and economic challenges, from poverty and education to food distribution and public health. The Pardee RAND Graduate School encourages the best and brightest students from throughout the world to think outside the box and to confront the big issues. I know that, with students and RAND researchers working together, we can help improve the future human condition.”

“Fred Pardee's generous gift will seed projects that help those in developing countries—many from which our students originate—and also help researchers develop new, innovative approaches to problem-solving,” said Susan L. Marquis, dean of the graduate school. “Our students are interested in doing field work in Africa and Asia, on topics such as food security; higher education; and how to shape cities as engines of innovation, growth, and development.”

Mr. Pardee worked as an economic analyst at RAND from 1957 to 1971. After leaving RAND, he founded a privately held investment firm that owns and operates apartment complexes in and around Los Angeles. In 2001, he donated $5 million to RAND to create the RAND Frederick S. Pardee Center for Longer Range Global Policy and the Human Condition. Later, in 2003, he donated $10 million to support the RAND Graduate School's endowment for core student support. The gift allowed the graduate school to expand and today more than 100 students are pursuing their PhDs in policy analysis. The school was renamed in Mr. Pardee's honor in 2003.