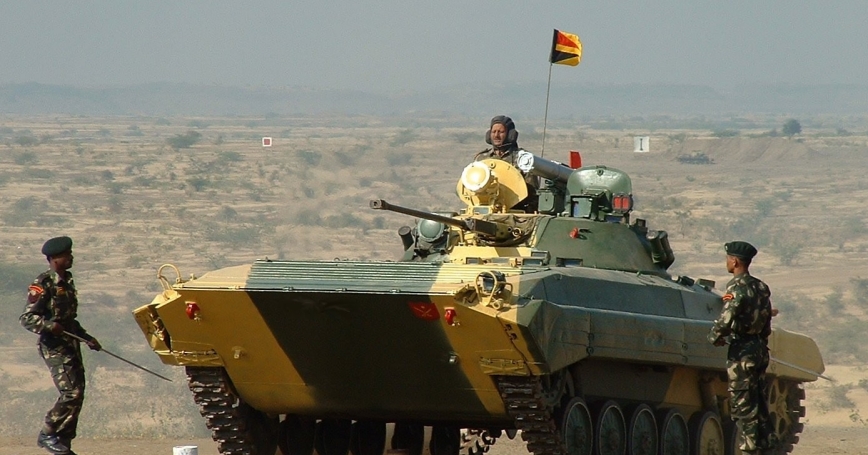 by Christopher Clary and Vipin Narang

Can India afford to simultaneously modernise all three defence services at its current pace?

Yesterday, India jubilantly tested the long-range Agni-V ballistic missile for the second time, en route to the missile's induction into the Strategic Forces Command in several years. But trouble looms on India's borders. In the recent monsoon session, Defence Minister A.K. Antony stood before Parliament to defend the government against the charge that it is permitting Chinese encroachment along the border and Line of Actual Control. Ground realities are difficult to discern from New Delhi, but much of the Indian media seems fearful that the Chinese are winning a slow border game of chicken. To the west, Pakistan Prime Minister Nawaz Sharif continued to make conciliatory noises towards Delhi while also chairing a National Command Authority meeting, which affirmed its support for “full spectrum deterrence”.

To deal with this rough neighbourhood, India has embarked on an ambitious military modernisation programme. Indians have triumphantly witnessed progress on a nuclear ballistic missile submarine, the Arihant, whose reactor recently went critical; watched the aircraft carrier Vikrant set off from dry dock; cheered news of the successful Agni-V test; and learned of political clearance to raise a Mountain Strike Corps in the east to be headquartered at Panagarh. Each of India's three armed services is moving to modernise itself.

But can India afford it all? The defence budget for 2013–14 grew by 5 per cent over the previous year, with defence capital acquisitions growing by 9 per cent. But, with inflation averaging more than 5 per cent since February, and the rupee depreciating by 14 per cent against the dollar over the same period, that modest nominal budget increase is actually a real budget decrease for defence. In a time of austerity, strategic planning is about prioritisation. How should India prioritise its future military modernisation to meet its envisioned security requirements? Each of the three services can claim urgent need.

First, there is the Indian Air Force. Saddled with an ageing, shrinking set of fighter aircraft and a stalling deal to buy France's Rafale, the IAF desperately needs an infusion of modern fighter aircraft. While the Sukhoi-30 MKI is an incredibly capable aircraft, and India plans to ultimately acquire 272 of them, one fighter alone cannot meet the full range of India's needs and mandated squadron strength. Despite high hopes, the Medium Multi-Role Combat Aircraft (MMRCA) deal with Dassault for its Rafale jets appears to be sputtering. Between French cutbacks in production and the falling rupee, it is an open question whether Dassault can live up to the terms of its lowest price bid. The IAF's joint development with Russia of a fifth-generation fighter, the Sukhoi PAK FA, is still in the early phases of development. That leaves India still relying on obsolete MiG-21s — in service for 50 years, with an increasingly abysmal safety record — as the backbone of its fighter strength. The IAF is similarly strained on transport and close air support capabilities.

While the air force struggles to replace obsolete platforms, the navy has launched an ambitious expansion plan of its surface and submarine fleet demanding significant capital expenditures. The half-decade process of developing and arming the Arihant and Vikrant is only beginning. But to have a fully operational nuclear deterrent at sea, India will need at least three nuclear submarines — at an estimated $3 billion each, not including the cost of developing the submarine-launched ballistic missiles. Similarly, the Vikrant will need time in port for maintenance and refitting. To keep up its forward naval air presence, India will need to complete the Vikrant's bigger sister ship, the Vishal, and finalise the painfully expensive, long-delayed acquisition of the aircraft carrier Vikramaditya from Russia.

The army has its own ambitions for replacing and expanding capabilities. The recent clearance to raise a Mountain Strike Corps will cost an estimated Rs 65,000 crore. Meanwhile, the army is in the process of fully upgrading India's main battle tank to the Russian T-90, even as it upgrades the army's attack-helicopter fleet and basic infantry, artillery, and armoured equipment. The army still has to decide where to hide its indigenous Arjun tank, which it has never been excited about but had thrust upon it by the DRDO. If the goal is indeed to be capable of waging offensives simultaneously on India's western and eastern fronts, the army still has a long way to go.

None of this will be cheap. So can India afford to simultaneously modernise all three services at its current pace?

This debate between competing services and strategic visions will be a painful one, but it must be had. All countries have difficulty picking winners and losers among services. It's always tempting to spread the wealth around. But doing so can carry very real costs. Instead of a clear-headed strategic rationale for investment, driven by a vision of its future strategic posture, India might find itself under-equipped in all three services — and dangerously vulnerable. India's civilian defence managers are particularly ill-equipped to make strategic choices, with many senior officials appointed to the defence ministry with no prior national security experience.

Choosing among weapons systems and services requires making bets about India's future security landscape and determining what sort of wars India may have to wage in future. For example, is India's future security best obtained with a strong land and air force, or does it make sense to invest heavily in naval capabilities, where India presently has an advantage, but which could pit it against a growing PLA Navy and lead to a potentially expensive naval arms race? Can India best deter China by developing a capability for land grabs along the border or by threatening China's maritime trade? Can India best deter Pakistan with the capability to attrite the Pakistan army or with the capability to strike deep into Pakistan's heartland?

No single service can answer these questions, and the military cannot do so without civilian guidance. But India's services are so stove-piped, and its civil and military leaders so sharply divided, that South Block cannot ask such questions, let alone answer them. Until real defence reform occurs in India, military modernisation in a time of austerity will just mean less of the same.

Christopher Clary is a Stanton Nuclear Security Fellow at the RAND Corporation. Vipin Narang is assistant professor of political science at MIT.

This commentary originally appeared on The Indian Express on September 16, 2013. Commentary gives RAND researchers a platform to convey insights based on their professional expertise and often on their peer-reviewed research and analysis.