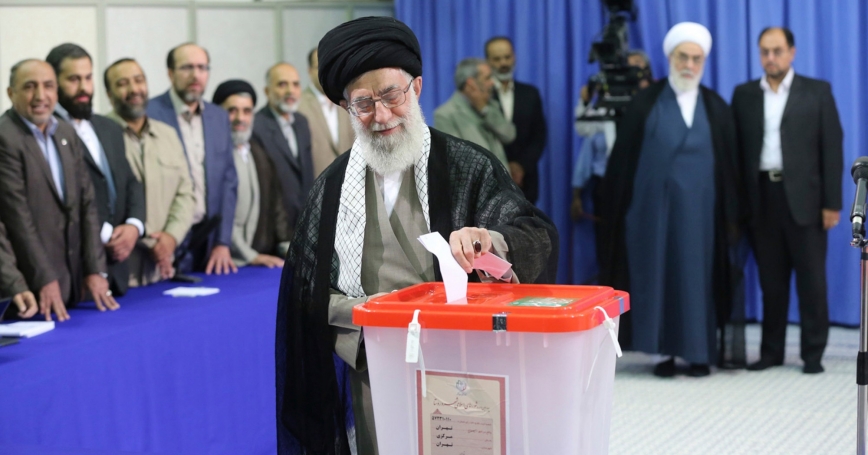 If his words are any guide, Iran's supreme leader is pivoting to diplomacy.

Long an advocate of “resistance” to the United States, Ayatollah Ali Khamenei now speaks of a policy of “heroic flexibility” and praises his new president, Hassan Rouhani, for his administration's “heroic” and “artful” approach toward foreign policy.

The positive signals from Iran toward the United States are coming fast and furious. In recent weeks, Rouhani and his ministers have published a remarkably conciliatory op-ed in the Washington Post, exchanged letters with U.S. President Barack Obama, granted an interview to NBC News, sent Rosh Hashanah greetings to the world's Jews over Twitter, and released political prisoners ahead of next week's U.N. General Assembly.

Has the Islamic Republic — better known in recent years for its furious denunciations of the “Great Satan” and its denials of the Holocaust — gone soft? Khamenei might even have a few more surprises up his sleeve, be they concessions on the nuclear program or expanded freedoms at home. The devil will be in the details, of course, and there are grounds to view the regime's actions with some skepticism.

It is too early to tell for sure. But a key question remains: What's behind the change in tone in Tehran? The replacement of Mahmoud Ahmadinejad, whose eight-year tenure was defined by searing tension with the West, with Rouhani cannot explain it alone. The answer: The Islamic Republic faces an existential crisis, and it is reacting accordingly.

Khamenei's problems started in 2009, with Ahmadinejad's re-election. Millions of Iranians, including the other major presidential candidate, Mir Hossein Mousavi, viewed the election as fraudulent. Iran faced its biggest demonstrations since 1979. Khamenei and the Revolutionary Guards reacted with brute force, and Mousavi was jailed along with hundreds of other Iranians. But the regime's violent reaction only drove the population's deep dissatisfaction back underground, and the Islamic Republic was left divided.

Then Ahmadinejad made things even worse. His economic policies increased inflation and unemployment and he thumbed his nose at Khamenei, who had supported his re-election.

But more was to come. Iran's unyielding position on the nuclear program led to unprecedented sanctions, devastating the livelihoods of millions of Iranians. A sharp decrease in oil exports (by as much as 50 percent), the devaluation of Iran's currency, and a huge increase in prices created the perfect economic storm.

Iran's leaders, including Khamenei, could not have failed to notice the Arab world afire around them. The causes of the Arab Spring can be debated, but surely unemployment, social repression, and corruption contributed in no small measure to the revolts in Tunisia, Egypt, Bahrain, and Syria. Khamenei and his supporters may have described the Arab uprisings as an “Islamic awakening” meant to overthrow the American “yoke,” but the truth may not have been lost on more astute minds in Tehran: Authoritarian regimes can be overthrown, and quite violently. Iranian leaders, having poured billions into neighboring Syria to prop up Bashar al-Assad, are well aware of the dangers of an angry public.

One of those astute Iranian officials is Rouhani. He gets it. Rouhani realizes that only a reduction of tensions over the nuclear program can save Iran's theocracy. The positive signals from his administration attest to it. And it seems that Rouhani now has Khamenei's backing.

Of course, the supreme leader may have recognized the regime's crisis all along, but hidden this knowledge behind defiant rhetoric and revolutionary slogans. Like most politicians, he does not want to admit that he was wrong. To that end, Rouhani's election is useful to him.

So where does this leave the United States? Washington has been presented with a unique opportunity to negotiate limits on Iran's nuclear program. But the negotiations may prove to be difficult and lengthy. Khamenei will not bend so easily, as any flexibility must appear to be a “heroic” compromise for the good of the regime. Many American analysts and policymakers will also ask: If pressure works, then why not apply more?

The Islamic Republic is in crisis, and Washington has the power to dig Khamenei in even deeper. However, this will not guarantee an end to Iran's nuclear pursuit, especially if the regime sees it has nothing to gain from negotiations. Regime hardliners will not hesitate to pounce, should Rouhani's charm offensive fail to produce results. That would be disastrous.

Obama said this week that he would “test” Rouhani's sincerity. But he should do more than test — he should respond “heroically” to Iran's diplomatic overtures, and show some flexibility of his own. But the president first needs to be clear on what he seeks from Iran: concessions on the nuclear question alone, or on a broader range of issues, from Iran's role in Syria and Afghanistan to its support of groups like Hezbollah? What level of Iranian cooperation is enough to begin rolling back the sanctions?

Clarity can only take the president so far, however. America's differences with the Islamic Republic are real and deep, and skeptics on both sides will present major political obstacles. Rouhani cannot be expected to change everything and, if Iran's economy improves or internal divisions dissipate, Khamenei may show less flexibility.

Obama should also remember this salient fact: Ultimately, the Islamic Republic's crisis is the reason for its change in tone, and not a change in leadership, thought, or ideology.

This commentary originally appeared on politico.com on September 20, 2013.