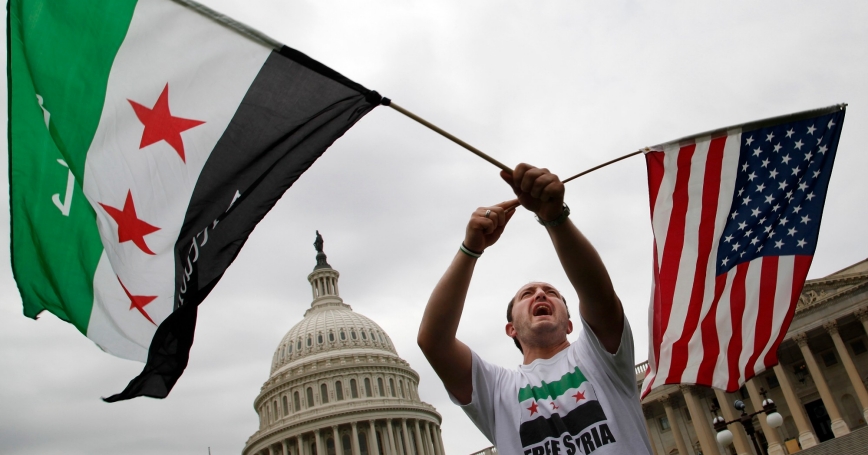 Syrian-Americans rallying outside the U.S. Capitol in favor of proposed U.S. military action

If you want to understand the Obama administration's objectives in Syria, don't just listen to what officials say — watch what they bomb.

Some senior U.S. officials have insisted that their objectives in striking Syria are straightforward: to degrade the Assad regime's ability to use chemical weapons again and to deter future use of such weapons.

But other U.S. officials, including on Capitol Hill, have called for military action to tip the war in favor of Syrian insurgents, weaken the Syrian military's ability to kill civilians, or even hit Al Qaeda or Hezbollah targets. And there are many variations in between.

So what are America's objectives? The reality is that U.S. actions will speak much louder than words. That means you'll need to wait until the Tomahawks start hitting their targets to really figure out what's going on.

There are at least four sets of potential political objectives. Each is linked to a different set of targets.

1. First, if the administration wants merely to damage Bashar Assad's ability to conduct chemical attacks again — or to send a message to governments across the globe that might consider using weapons of mass destruction — then the target set is fairly narrow.

There are risks with this approach. Hitting depots could release some chemicals into the air or onto the ground. With infrastructure damage and security guards scattered or killed, extremist groups might try to seize the regime's chemical weapons. In addition, the United States won't be able to eliminate Syria's entire suite of delivery mechanisms. The Assad regime most likely has extensive chemical-weapons stockpiles and multiple means for delivering them, including aircraft, missiles and artillery.

The best the military could hope for, short of a massive ground invasion that nobody is contemplating, would be to selectively target the regime's most efficient delivery systems — its aircraft and missiles. But that would leave thousands of artillery pieces in Assad's hands, leaving him plenty capable of using his deadly poison gases.

Alternatively, the United States could strike targets that are highly valued by the Assad regime. These targets don't necessarily have to be associated with chemical warfare but could include senior officials or key military command-and-control centers, such as the Defense Ministry.

2. Second, if the administration wants to weaken the Syrian military and tip the balance in favor of the rebels, the United States would target Syria's air and ground forces.

In the ongoing civil war, the Syrian Arab Air Force has used fighters and helicopter gunships to attack civilian populations in rebel-held areas and to strike opposition forces. The SAAF inventory includes more than 350 fixed-wing combat aircraft, including nearly two dozen MiG-29 fighters with long-range air-to-air missiles. Some of these fighters are antiquated and in disrepair, making the SAAF's fleet of helicopters, transport aircraft and L-39 attack trainers the most appealing targets. Destroying the SAAF or grounding it through intimidation would weaken a key aspect of Syria's military strategy: its air superiority. Targeting the SAAF might also make it more difficult for the Syrian army to move forces around the country.

The United States could also target the Syrian army's ground capabilities, such as battle tanks, artillery, logistics hubs, communications centers and command-and-control facilities. But there are difficulties with this approach. The target set is large and the United States would need to conduct waves of precision strikes to degrade Syria's military capabilities — meaning hundreds of potential sorties. The United States could also coordinate airstrikes with offensive ground operations by rebel groups, supported by the CIA and other allied units in Syria or neighboring countries.

3. Third, if the United States wants to leave open the possibility of an escalating air campaign in the future, as the U.S. orchestrated in Kosovo in 1999 or Libya in 2011, it would have to target Syria's integrated air defense system. The primary components of the Syrian air defense system are radar and surface-to-air missile systems. They include large, mostly fixed systems and smaller mobile SAM systems such as the SA-6 and its successors, the SA-11 and SA-17. Taking out the air-defense system would be essential in a broader air campaign — but, as Joint Chiefs Chairman Gen. Martin Dempsey has said, doing so substantially raises the costs and the risks of the U.S. campaign.

4. Fourth, if the United States wants to degrade terrorist groups in Syria, such as Hezbollah or the Al Qaeda-affiliated Jabhat al-Nusra, there is a different set of targets.

Jabhat al-Nusra's most secure sanctuary is in the Sunni-dominated Deir Ez-Zor province, where Al Qaeda in Iraq's foreign-fighter route has operated for nearly a decade. A second area is in northwestern Syria, where Jabhat al-Nusra has moved fighters, explosives and other material across the Turkish border into Halab and Idlib provinces. The group has also established bases in Daraa province, near the Jordanian border, and in Damascus.

The United States would most likely strike Jabhat al-Nusra camps situated near Syria's borders with Turkey, Jordan and Iraq if it wanted to weaken the Al Qaeda affiliate. These camps provide weapons training, religious indoctrination and explosives training to foreign fighters, including a handful of Westerners.

The United States could also target Hezbollah forces on the ground in Syria, including Hezbollah command-and-control facilities, training camps or weapons depots. Hezbollah fighters have been active in such locations as Al-Qusayr and Damascus.

These four target sets are not mutually exclusive. The United States could hit a combination of them, indicating a broad suite of political objectives.

With so many options, Americans may get confused by the cacophony of stated objectives for military action in Syria. That makes it critical to watch what the United States strikes, not just what its leaders say.

Seth G. Jones is associate director of the International Security and Defense Policy Center at the RAND Corp. and author, most recently, of “Hunting in the Shadows: The Pursuit of Al Qa'ida Since 9/11.”

This commentary originally appeared on politico.com on September 8, 2013.