The Hidden Conclusions in the U.N.'s Syria Gas Report 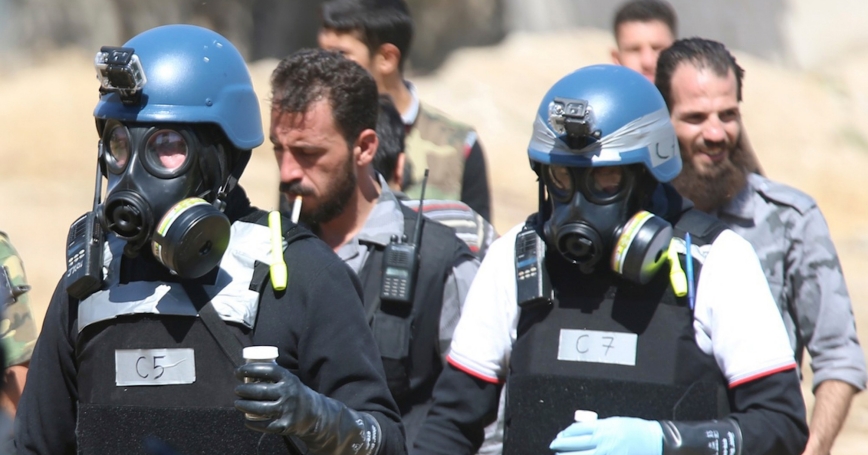 Let's start with some kudos: The report, written by U.N. experts under what are quite literally combat conditions, is a model of careful work by scientists working under hazardous conditions and pitiless deadlines. We should all commend the U.N. team for its courage, rigor, and care. They take a restrained, legalistic approach, reporting strictly what they have observed and measured in the field and then tested in the laboratory, examining debris from Syria in separate chemical laboratories certified by the U.N.'s Organization for the Prohibition of Chemical Weapons for the detection of chemical agents. The U.N. experts clearly tie the use of chemical agents, particularly sarin nerve gas (called “chemical agent GB” in the appendixes of the report), to particular artillery rocket fragments found in the Damascus suburbs after the shelling on August 21.

The U.N. scientists are scrupulous about observing their mandate, which was simply to report on whether gas was used — not who used it. (That carefully negotiated and limited mandate is yet another reminder that Russia, the main backer of Syrian President Bashar Assad, has gone out of its way to shelter the Assad regime from U.N. action.) The U.N. experts had to be circumspect about the conclusions that they drew. But the rest of us are free to draw on additional information and make logical inferences from the wealth of data presented by the experts' report.

What type of weapon crashed into the Damascus suburbs on August 21? The U.N. report carefully describes fragments of the weapon and produces a diagram showing a re-creation of its original form. The fragments and diagram suggest that Syrian civilians were struck by a purpose-built chemical weapons delivery system that utilized parts from a basic artillery rocket. An artillery rocket is an unguided weapon that is aimed rather roughly by using a launcher tube, following in the tradition of the World War II-vintage Soviet Katyusha rocket or the 122mm rocket developed by the Soviets and widely imitated by multiple countries, particularly Middle Eastern states.

The U.N. report's diagram of one of the munitions associated with sarin gas delivery shows a cobbled-together rear section, with large tail fins and a rocket motor diameter of about 12 centimeters, and a large front-end warhead with a diameter of approximately 36 centimeters. This munition has several features that deserve discussion — and invite us to draw some blunt conclusions that the U.N. could not.

The U.N. reports that the warhead is a thin-walled metal cylinder estimated to have a fluid capacity of 56 liters (plus or minus 6 liters). The cylinder is shown with two plugs — one with a fill tube, the other simply a threaded hole, probably to vent air while the cylinder is filled. The front end of the warhead is very large relative to its tail section. If completely filled with sarin (which has a density of 1.09 kilograms per liter), the gas alone would weigh more than 60 kilograms. That's an enormous amount of sarin — much more than would be associated with a standard artillery rocket or artillery shell.

The U.N. further reports that the front end of the warhead has a solid plate that's been threaded for a fuse used to ignite a small burster charge. When the fuse is activated, the burster charge opens the cylinder to simultaneously release and vaporize (or aerosolize) its liquid contents.

Here's one particularly striking fact: Weapons whose aerodynamics resemble those of small garbage cans were sent crashing into an urban terrain made up of mixed hard and soft surfaces, resulting in random impact angles — and there were no duds. Any dud would probably have been spotted and reported by now. The absence of duds might just be dumb luck — but more likely, it indicates that the weapon had an “all ways” acting fuse that worked without regard to impact angle or hardness. Someone had either bought or made a rather sophisticated fuse — not the type of thing someone who was improvising would have been likely to come up with.

These warheads, in other words, were deliberately custom-built to deliver a particularly massive and lethal payload of sarin gas.

All by itself, the ability to create tens of liters of sarin to fill such carefully crafted munitions demonstrates some serious technological skill in dealing with chemical weapons — and an organization that can still perform under hazardous conditions. The U.N. report cannot say so, but it is quite clear that the lethality of the munitions used in Syria point directly to an actor with significant capacities and long experience using chemical weaponry and artillery. And that fingers the notoriously abusive Assad regime and its security services, not the outmatched, outgunned and frantically improvising rebels.

The U.N.'s evidence doesn't look any better for the Assad regime when it comes to the munition's rocket motor. This portion of the munition may represent a 122mm artillery rocket (though a separate impact site has a motor that the U.N. identifies as part of a 140mm artillery rocket) modified with multiple large, fixed stabilizer fins and reinforced with a tail ring. These large fins give aerodynamic balance to the munition's heavy and clumsy front end. Because the stabilizer ring is permanently affixed to the munition's rear section, the modified rocket would no longer fit into whatever launcher tube it was originally associated with. The motor portion and the weapon would have to have a new launcher of approximately 36 centimeters in diameter; this might be made from scratch, or the ring and warhead might have been designed to the particular diameter of an existing rocket launcher.

The combined pieces are crude, but together, they could deliver a large quantity of sarin with only a few weapons. They probably could not do this over a range of more than a few kilometers, and probably with no great accuracy. If launched in a salvo from multiple rocket launchers, the rockets would probably land close to one another, but it would be difficult to guarantee that they would hit any particular target. But with chemical weapons, that's not the point. Under the right atmospheric conditions, the simultaneous arrival of a barrage of these munitions would create a rapid buildup of sarin vapor. That might have particular tactical value in situations in which previous artillery attacks and other high-explosive weapons have driven target forces or populations to shelter underground.

Taken together, the features of the munition used in the Damascus suburbs suggest that it was produced as a conscious effort to create a tactical weapon that could rapidly create lethal concentrations of sarin gas in a large area. This effort, however ugly in appearance, should be taken very seriously indeed. What happened in Syria was not an incidental atrocity; it was a demonstration of conscious intent. And as any lawyer will tell you, you need both action and intent for a crime — including a war crime.

James T. Quinlivan is an operations research analyst at the nonprofit, nonpartisan RAND Corporation with a background in systems engineering of guided missile systems.

This commentary originally appeared on U.S. News & World Report on September 25, 2013. Commentary gives RAND researchers a platform to convey insights based on their professional expertise and often on their peer-reviewed research and analysis.