The Road on from Damascus: What the Syria Deal Means for the U.S. and Russia 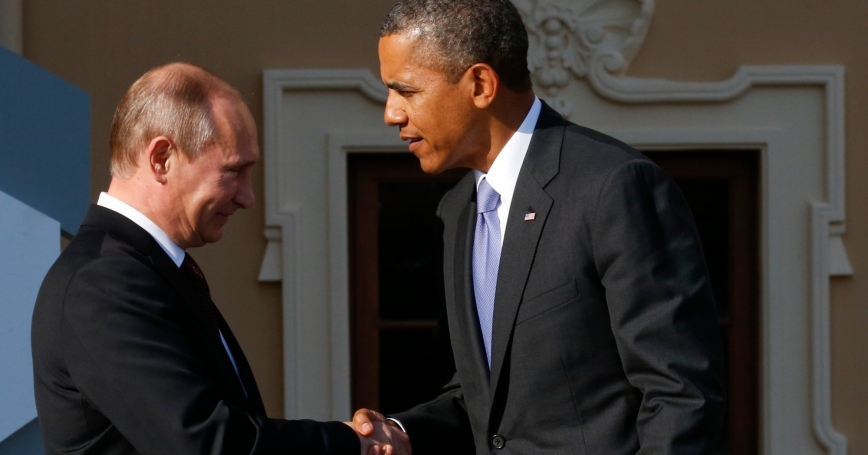 When Russian President Vladimir Putin helped broker a new agreement to have Syria dismantle its chemical weapons arsenal, some critics warned that Russia was using this opportunity to undermine U.S. credibility in Syria and beyond. Meanwhile, other commentators argued that this bargain could be the basis for renewed cooperation between Russia and the United States, whose relationship had seemed to be in a tailspin. Now, with the United States and Russia at odds over just how their deal will be implemented, it might seem that the first group had a point.

But in fact, neither viewpoint reflects the full reality. Major powers are motivated by interests, not emotions. At different moments, they may compete, clash, or cooperate. We should not expect Moscow and Washington to share a common worldview, or act out of concerted altruism. Rather, Russian-U.S. cooperation on Syria is yet another sign that the two countries will continue to cooperate when their interests overlap, just as they have in the past. Their disagreements are evidence that agreement on one point is not agreement on all.

Despite their meeting of the minds over Syria's chemical weapons, Russia and the United States will continue to have an often-contentious relationship. U.S. and Russian interests differ on a broad range of issues, including principles of when states should and should not intervene abroad, missile defense, and, indeed, the future of Syria. The deal the United States and Russia struck to get rid of Syria's chemical weaponry is neither a sign of a sea change in relations nor a victory for one party over the other.

It is, however, something of a testament to diplomacy on both sides. Russia and the United States came to the table with very different goals. Russia wanted to avert U.S. and French military action; the United States wanted to send a clear signal to Syrian President Bashar al-Assad that chemical warfare is unacceptable. U.S. and Russian diplomats found an overlap, at least in the near term, by forging an agreement that forestalls U.S. use of force if Syria gives up its chemical weapons capability.

But as we are already seeing, this doesn't in any way guarantee smooth sailing ahead. U.S. and Russian diplomats are clashing as they try to hash out the terms of a UN Security Council resolution designed to enshrine their agreement. Even when that's done, the pact needs to be implemented. Syria has already provided a declaration of its chemical weapons inventory, which is under review, but the process of surrender and associated UN inspections while civil war in Syria rages, will be a challenge, to say the least. Because Russia continues to support the Assad regime and the United States continues to seek Assad's ouster, each stumbling block in this process risks new U.S.-Russian disagreement. And any failure to implement the chemical-arms agreement to Washington's satisfaction will certainly mean renewed anger and frustration on both sides.

As these and other new challenges arise, Moscow and Washington may again be able to find ways to compromise and cooperate. Or they may find themselves at loggerheads. We should probably expect a little of both.

But the bottom line is clear: on Syria as on other issues, Russia and the United States will work together when both have something to gain from doing so, and they will oppose one another when they disagree. While the deals they strike may be in everyone's best interests, it is wise to remember that no one is doing anyone any favors.