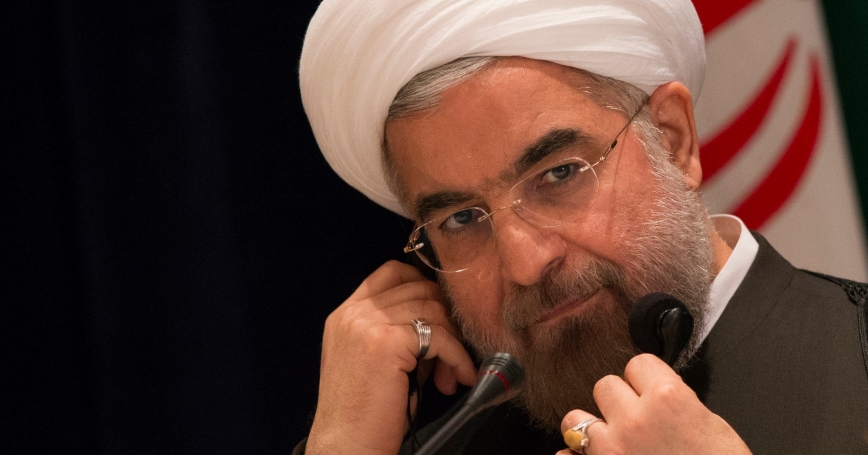 From Tehran's perspective, the current negotiations between Iran and the United States may be best described as a wrestling match. Before President Hassan Rouhani's speech at the U.N. General Assembly (UNGA), his boss, Supreme Leader Ayatollah Ali Khamenei spoke of “heroic leniency” toward the United States. Subsequently, Khamenei's office issued a telling graphic that depicted a set of guidelines for negotiations. The graphic also called to mind an Iranian zoorkhaneh, or house of strength, where men perform traditional weightlifting and wrestling, one of the most popular sports in Iran.

According to Khamenei, the Islamic Republic is willing to engage its enemy, or show “flexibility,” in order to win the overall competition. However, Khamenei and the Revolutionary Guards have also laid out clear red lines for Rouhani. He is to demonstrate no weakness or “humility” with the opponent, the United States. And he should not weaken Iran's ties and alliances with Islamic and resistance groups, especially Hezbollah.

Rouhani's recent charm offensive has greatly raised expectations amongst those wishing for U.S.-Iran reconciliation. However, this is not Rouhani's mandate; rather, the Islamic Republic has tasked him with negotiating the nuclear crisis away and alleviating pressures faced by the regime. Although this may not seem the perfect outcome, it nevertheless presents a unique opportunity for the United States.

It is unlikely that Khamenei and his supporters will ever change their fundamental views of America. Suspicion of the United States may be motivated by religious and cultural values, but only to a limited extent. The regime's revolutionary ideology and geopolitical interests play a bigger role.

Khamenei sees the global order as tilted in the West's favour. The United States is the latest of a long line of imperialist powers that have attempted to dominate the Middle East. He views his regime, which replaced Iran's last monarch, as the focal point of resistance to Western domination.

Khamenei has said that he does not oppose negotiating with the United States in principle as long as it does not violate Iran's interests.

For a long time, his policy seemed to work. Iran carved out a sphere of influence from Afghanistan to the Mediterranean, and could count on its allies in Iraq, Syria, Lebanon, and beyond to help maintain its interests. Iran's economy, while never great, functioned and at times prospered until the imposition of the most punishing sanctions.

Iran earned an estimated 500 billion dollars from oil and natural gas sales during Mahmoud Ahmadinejad's presidency, while its nuclear programme progressed in the face of Western opposition. Khamenei was willing to engage the United States in Afghanistan and Iraq in order to enhance Iran's influence, and no more.

But Ahmadinejad's monumental incompetence made Iran the loser, not the champion. Iran's economy is in the dumps, the people are unhappy, and Tehran's regional influence is in decline. Khamenei needed a new wrestler, and Rouhani appears more than capable. He can manage the economy, negotiate away sanctions, and give the Iranian people a bit more freedom, but not too much.

It is not too surprising that Rouhani did not shake President Obama's hand during the United Nations General Assembly confab. He may have a mandate to negotiate, but he cannot appear to be weak in the face of the enemy. Khamenei's “heroic leniency” means a well-defined set of red lines and parametres, rather than gestures that call into question the very purpose of the wrestling match.

However, this does not mean that Rouhani's diplomacy is false or that Khamenei is merely buying time. In the past, U.S. engagement with Iran has produced results. Iran's support was crucial in establishing the government of Hamid Karzai after the U.S. overthrow of the Taliban in Afghanistan. Limited engagement with Iran focusing on the nuclear programme and perhaps even Syria can work.

Real U.S. wrestlers have competed with Iranians, and have always been greeted in Iran with open arms. However, no one should expect Rouhani to change the dynamics between Iran and the United States, or apparently, to even offer his hand in friendship. The wrestling match is not over, but for now some flexibility from both sides can ensure a managed rivalry, rather than a bloody mess between a beleaguered superpower and its frustrated but determined regional rival.

This commentary originally appeared on Inter Press Service on September 27, 2013. Commentary gives RAND researchers a platform to convey insights based on their professional expertise and often on their peer-reviewed research and analysis.