Syria As We Know It Is Gone 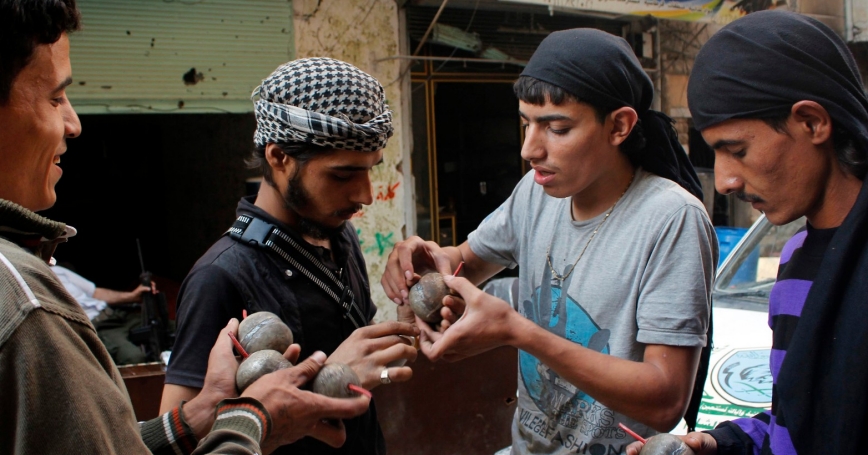 Other than as a geographic expression, Syria has ceased to exist. With Russian, Iranian, and Hezbollah support, Bashar Assad's forces, at the moment, appear to have gained the initiative over a fragmented rebel movement. But Assad will not be able to restore his authority throughout the country. No government will be able to rule all of Syria in the foreseeable future.

In two and a half years, the rebellion has grown significantly to a force of more than 100,000, but it remains fragmented and at war with itself. The main schism is between the secular components of the rebellion, represented in the field by the Free Syrian Army, and the various jihadist groups, some of which are directly linked to al-Qaida. But the rebels' order of battle is much more complicated than that. In September, fighters from the al-Qaida-affiliated “Islamic State of Iraq and al Sham [meaning the Levant]” drove fighters of the FSA out of the border town of Azaz. The FSA struck back, killing ISIS's commander in the province.

Secretary of State John Kerry has claimed that the jihadists do not dominate the rebellion, but represent no more than 15 to 25 percent of the force. However, jihadist strength appears to be growing rapidly through recruitment and defection of other rebel units, and jihadists appear to be getting ample foreign support while Western governments look for reliable local partners.

Rebels lack the weapons they would need to challenge the superior armament of the government forces, though their hold on some regions can be expected to endure. Saudi Arabia and Qatar currently provide funds for rebel arms purchases. Private parties in the Gulf are the main sources of funding for the jihadist groups. During the Soviet occupation of Afghanistan, the United States armed the resistance fighters with surface-to-air missiles, a game-changer that contributed to the defeat and eventual withdrawal of Soviet forces.

But that was in the 1980s. Fear of terrorism has since become a major factor in all war planning and has made external supporters reluctant to provide the rebels with any weapons that might be used in future terrorist attacks.

That reluctance is increased by the growing role of jihadist elements loyal to al-Qaida. Jihadists increasingly are the insurgency's cutting edge and therefore attract recruits from abroad and from other rebel contingents. Initially not a participant, al-Qaida's affiliate Jabhat al Nusra took the field only in January 2012, but is now considered the largest, most disciplined and most effective component of the rebel forces.

However, its principal rival, the ISIS, is now viewed in jihadist circles to be the more dominant al-Qaida faction. Numbers and loyalties among the rebels, however, are fluid. Instead of having a two-sided civil war, Syria has become a kaleidoscope of internal conflicts.

This complicates things for countries like the United States that have openly declared their desire to remove Assad, although without articulating a convincing strategy of how this might be accomplished or what might take Assad's place. The United States could reduce Assad's military superiority, but history suggests that limited military interventions don't depose dug-in dictators. A major military undertaking would be needed to bring about regime change and to sort out a chaotic scramble for regional control that would undoubtedly follow. That would require committing significant ground forces facing the prospect of a long, hard fight and occupation. No one was seriously suggesting such options even when U.S. action appeared imminent. The bitter legacy of Iraq and Afghanistan — America's two longest wars — discourages that kind of direct military intervention.

At the same time, al-Qaida's presence in Syria makes indiscriminate arming of the rebels dangerous. It would take time to carefully vet, train and arm the “good” rebels. It could take years before their presence would be apparent on the battlefield and, even then, the force might not be sufficient to tip the balance against Assad. The United States would be dabbling at the edges.

The ability of external actors to understand developments, let alone influence them, is very limited. Fast moving events, complex cross currents, uncertain numbers and fluid loyalties complicate analysis. Perhaps not surprisingly, previous forecasts have proved wrong. Less than two years ago, the consensus was that Assad's days were numbered. He now seems to be gaining strength, but that too could change quickly. Even those directly involved do not know what will happen next.

It is much simpler for Assad's foreign supporters: Assad must be kept in power. If Assad fell, not only would Iran lose an important ally in the region, Iranian leaders fear that Assad's demise could inspire a domestic movement aimed at bringing down the Islamic Republic. Assad's fall also would deliver a strategic blow to Hezbollah. His survival would add to Hezbollah's influence. Assad is Russia's last remaining ally in the Middle East, a major consumer of Russian arms and host to Russia's only warm water naval base.

All this makes it highly unlikely that the Assad regime will ever reestablish control over Syria as it was known just a few years ago. With continued help from his friends, Assad might survive as the leader of a government that holds Damascus and parts of Western Syria, but the conflict will undoubtedly continue in other parts of the geographic expression of today's Syria.

This commentary originally appeared on U.S. News & World Report on October 15, 2013. Commentary gives RAND researchers a platform to convey insights based on their professional expertise and often on their peer-reviewed research and analysis.