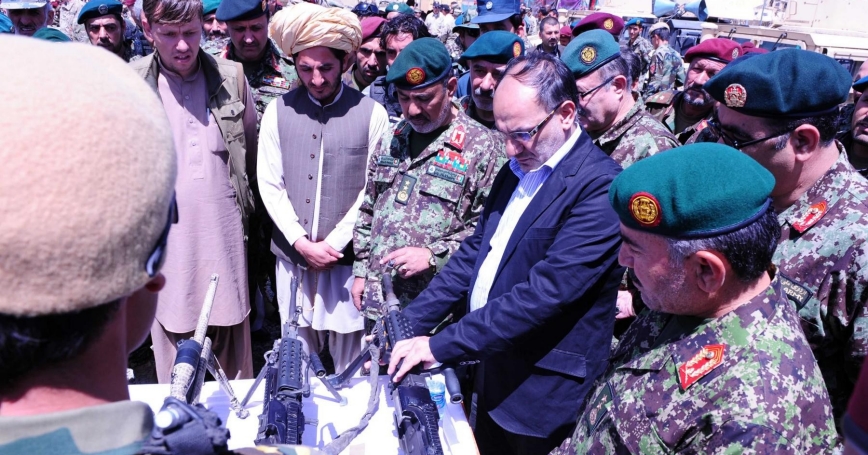 The use of drone strikes against terrorist targets has become one of the most controversial aspects of President Obama's national security efforts. Critics on the left have called Obama the “drone president,” and even the celebrated 16-year-old Pakistani activist, Malala Yousafzai, chided him in the White House recently, telling him that “drone attacks are fueling terrorism.”

Yet drones are just one of three principal U.S. counterterrorism tools, and not necessarily the most important. Special Operations forces are now relying on a more balanced mix of tactics: Launching raids and developing partner forces offer more versatility than drone strikes and will probably become the wave of the future as America's big wars wind down.

The outlines of Obama's new approach, which he sketched in his May speech at the National Defense University, have become clearer in recent months, especially in the twin raids in Libya and Somalia on Oct. 5. The first raid snatched up Anas al-Libi, an al-Qaeda member indicted in the 1998 bombings of the U.S. Embassies in Kenya and Tanzania. The second was an unsuccessful attempt to capture Ikrima, a member of the al-Qaeda-affiliated al-Shabab group who is reputedly responsible for plotting attacks around East Africa.

Raids have several advantages over drones. The targets can be interrogated for further intelligence, laptops and other physical evidence can be scooped up, and perhaps most important, the capture can result in what operators call a “judicial finish,” with the terrorist tried and convicted in a court of law.

Of course, Special Operations forces, along with the CIA, will still use drones when a threat is deemed so imminent that taking out a suspect is the best way to stop an attack on vital U.S. interests. That was the case in August when a barrage of drone strikes pummeled the nether provinces of Yemen to foil a reported plot on oil terminals and ports by the most active terrorist group today, al-Qaeda in the Arabian Peninsula.

But the drone's disadvantages, primarily political and diplomatic, are now widely recognized. Even if a strike takes out a target, the apparent unilateralism of the attack (local leaders often give tacit support) can lead to popular resentment against the United States. In Yemen, President Abed Rabbo Mansour Hadi has publicly endorsed drone strikes, but such a stance can undermine a leader's legitimacy at home. Finally, even if civilian casualties are minimal, just a few deaths can tarnish America's image — and fuel terrorist recruitment.

The third tool in the anti-terrorism toolkit is the use of partnered forces. Somalia is a good example: Special Operations troops have worked with a variety of partners to retake the country from al-Shabab, restoring government there for the first time in two decades and creating a network of allies to push al-Qaeda out of East Africa. Amid a wider peace enforcement operation, U.S. troops have helped train forces from Ethiopia, Uganda, Kenya and Djibouti. High-end Ugandan units played a key role in pushing al-Shabab out of Mogadishu, and SEAL-trained Kenyan boat units and infantry conducted a joint operation to retake the port city of Kismayo from al-Shabab, thus denying the terrorist group a key revenue source. Partner forces also reportedly played a role in the raid two weekends ago.

Today, Special Operations forces are engaged in some level of partnering in more than 70 countries, with an increasing focus on joint operations — or even raids conducted mainly by partners with a supporting U.S. role — to capture or kill terrorists. The bulk of America's 33,000 uniformed Special Operations forces, including the most elite units, will be engaged in partnering, but need time to develop their partners' combat skills and intelligence capacity.

This quiet partnering gets less attention than drone attacks, but it is the long game that will ensure that U.S. troops can go home and leave behind forces capable of keeping the peace in bad neighborhoods. In Somalia, the training, advising and assisting of partner forces has helped bring some order to one of the most famous ungoverned spaces on the planet.

Of course, just as drone attacks have their downsides, raids and partnering don't always work. The Somalia raid revealed the inherent risk in putting even highly skilled combat troops on the ground. The SEALs did not lose anyone in the heavy fighting, but they did abort the mission rather than call in airstrikes, which would have certainly killed Somali civilians. The tactical failure was not compounded by a strategic blunder, and the SEALs will continue to track their quarry for another try, with the support of partner forces.

There are many challenges to partnering. Skeptics doubt the capacity of countries such as Somalia, Kenya and Afghanistan to defend themselves, and they rightly criticize the rights abuses that can occur while local forces are not fully professionalized. It takes a long time for U.S. Special Operations troops to impart ethics and competence to their partners. Sometimes the United States has taken an expedient approach, with dismal results. This was the case in the Cold War, when the United States armed the Afghan mujahideen through Pakistan's intelligence service — the same mujahideen who fueled an internecine war and fed the ranks of al-Qaeda a decade later.

But in the most recent chapter of U.S. involvement in Afghanistan, the results of Special Operations partnering have been vastly underplayed. In a major commitment, more than four dozen Special Ops teams spread out over the country's insurgent belt from 2009 to 2012 to raise volunteers for a civil defense force to guard villages — a force that is now more than 25,000 strong. Special Operations troops have also trained Afghan commandos, special forces and rangers in their own image. This effort may not continue if the two countries cannot reach an agreement on U.S. troop presence in the coming months, but it does show what a concerted partnering effort can produce. The Afghan special operations forces are the best units in the Afghan military, and key parts of the insurgent belt, such as Konar province and Paktika province, are now secure largely thanks to the civilian defense initiative.

Most significant, after years of focusing on unilateral drone strikes and raids, U.S. Special Operations forces have regained a critical skill set of working with local populations, as they did in Vietnam, where they raised thousands of civil defenders in the central highlands. This is a highly transferable tool; many troubled countries have vast rural areas where terrorists find ready sanctuary, and lending a helping hand to those who find the courage to fend off attackers is one of the most productive uses of our Special Operations forces. It relieves the United States of the burden of doing so or intervening abruptly in a crisis.

The partnering approach may not be easy, and it does take years to produce results, but it is the most sustainable security solution around. The United States still needs to develop credible means of measuring the effectiveness of this approach, but don't be surprised if it becomes the future of America's fight against terrorism.

Linda Robinson is a senior policy analyst at the Rand Corp. and the author of “One Hundred Victories: Special Ops and the Future of American Warfare.”

This commentary originally appeared in The Washington Post on October 18, 2013. Commentary gives RAND researchers a platform to convey insights based on their professional expertise and often on their peer-reviewed research and analysis.