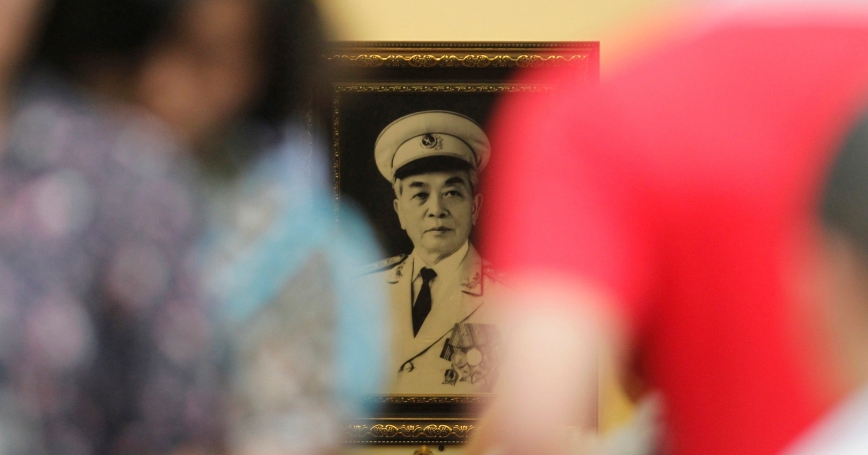 People pay their respects in front of a portrait of General Vo Nguyen Giap at his house in Hanoi October 6, 2013

The passing of Gen. Vo Nguyen Giap marks the end of an era for Vietnam — and for giants of the twentieth-century anti-colonial movement throughout the world. As commander of the Viet Minh and the Vietnam People's Army, his strategies led to successes against France and the United States that were regarded as among communism's finest military moments.

Giap, who died on Friday [Oct. 4] in Hanoi, at the age of 102, represented communism on the move: to his comrades (in Vietnam and further afield), his successes demonstrated the historical inevitability of the ideology.

Giap presided over a war effort that led to the deaths of over a million of his own troops (along with 58,000 U.S. troops, 200,000 South Vietnamese soldiers, and hundreds of thousands of civilians), and he was the last of his nation's war-era top leadership alive.

More than any other individual except for Ho Chi Minh himself, Giap was responsible for defeating the forces of France, the United States, and the South Vietnamese regime. As the architect of the Tet Offensive in 1968, Giap orchestrated a tactical failure that turned out to be a strategic success. While the campaign did not lead to a grassroots uprising in the South, it led American policymakers to a conclusion which Giap himself later expressed with his typical concision: “Any forces that wish to impose their will on other nations will certainly face failure.”

In his later years, Giap became known as an advocate of rapprochement between Vietnam and the United States and between the communist and non-communist worlds. “We can put the past behind,” he said in 2000, “but we cannot completely forget it.”

Jonah Blank is a senior political scientist at the nonprofit, nonpartisan RAND Corporation, and former policy director for South and Southeast Asia on the staff of the US Senate Foreign Relations Committee.