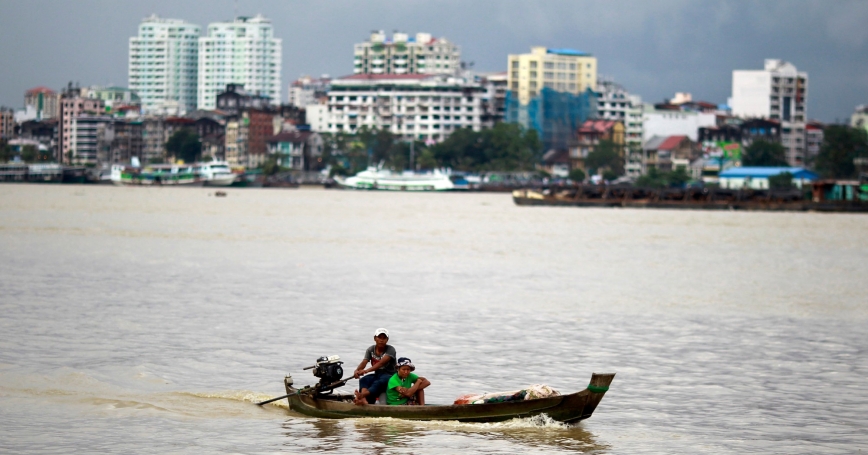 Men travel in a boat across the Yangon river

For anyone who follows Myanmar, the unprecedented domestic changes that have been witnessed since 2011 are nothing short of remarkable. The United States, to its credit, has welcomed these reforms and has made efforts of its own to start reaching out to a country that for many years was run by one of the most brutal and repressive governments in the world. Indeed, President Barack Obama has already made Myanmar one of his administration's top foreign policy priorities in Southeast Asia.

It is critical that the United States retain this focus, as there are numerous challenges that could yet upset Myanmar's “rehabilitation” in global affairs. Initiating a process to remove sanctions, even if this takes time, would be a good start.

In March 2011, power in Myanmar was transferred to a nominally civilian — albeit military backed — government that has since exhibited signs of a fundamental transformation in both political and strategic direction. Under the presidency of Thein Sein, the country has released political prisoners of conscience, opened up the economy, unblocked Facebook, moved to at least partially unshackle the press and, perhaps most notably, freed Nobel Peace Prize winner Aung San Suu Kyi from nearly 15 years of house arrest. Last year, her National League for Democracy contested in elections, winning 43 out of 44 seats — a result the military accepted.

While such progress is welcome, Myanmar faces a number of significant challenges in overhauling its political, social and economic infrastructure. Principally these include: widespread poverty and underdevelopment; a governing system that continues to lack true accountability and transparency; escalating religious tensions between Muslims and Buddhists; a highly aggrieved (and officially nonrecognized) Rohingya minority; the existence of armed ethnic groups that remain intimately involved in the regional drug trade; and ongoing human rights concerns in the military.

Compounding these difficulties are regional power plays that are likely to occur as Myanmar opens up. The country's key geostrategic location between South and Southeast Asia, its sea-borne trade outlets along the Bay of Bengal and its substantial economic potential will make it a likely target for the People's Republic of China. Beijing, which for many years held considerable sway with the ruling military junta, will seek to retain its favored position while simultaneously seeking to reduce America's — not least because Washington is viewed as pursuing an explicit policy of “Sino strategic encirclement.”

Addressing these challenges will not be easy. On the domestic front, Myanmar will have to navigate through an array of policy choices that could well work against one another. For example, unless properly managed, efforts to crack down on the drug trade could easily upset tentative peace deals reached with warlords in the states of Shan, Kachin and Wa, and a return to arms would be likely to discourage overseas companies from investing in the country. Equally, moving too fast on government reform could undermine the support of the military, which continues to exercise significant “behind the scenes” influence in the country.

Internationally, Myanmar will have to carefully balance its relations with China. To be sure, Beijing offers a highly lucrative source of trade and development assistance, much of which will no doubt be given with few, if any, political demands. That said, becoming over-reliant on the Chinese poses both economic and security risks.

On the former, there is increasing uncertainty as to whether the so-called “Chinese model” — the export of cheap manufactured goods, rapid urbanization and foreign investment — can be sustained over the long-term. On the latter, allowing Beijing to dominate Myanmar's market opens up the risk of China exploiting this influence to further its own security interests. Myanmar which is set to assume the chair of the Association of Southeast Asian Nations from Cambodia next year, will certainly want to avoid the past example of that country (which unashamedly bowed to the prerogatives of China) and actively resist undue pressure or intimidation that might originate in Beijing.

The United States has a vested interest in furthering and consolidating the reform process in Myanmar. Securing the country's rehabilitation will be an important component in ensuring the success of the much touted ASEAN Political and Security Community, which is due to come online in 2015. Domestic stability will also open up a large investment market, help to stymie the production and trafficking of heroin and amphetamines (both of which have had widespread implications across Southeast Asia) and provide the necessary conditions for promoting greater professionalization in what has hitherto been a highly repressive and abusive defense sector.

The United States, along with many other Western states, has subjected Myanmar to highly restrictive political, economic and security sanctions for many years. While some of these bans have been lifted, many remain in place, including trade and business embargoes enshrined in the National Emergencies Act. Washington now has to ask itself whether its goals can best be met with these restrictions in place or whether it is time to recognize the fundamental changes that are taking place in Myanmar and forge a new relationship with its leaders based on full government-to-government relations.

Although repealing sanctions will take time as they are embedded in legislation (unlike those imposed by other countries such as Australia), the United States needs to at least start moving in this direction. Maintaining a punitive regime of bans in the face of long-awaited reforms will, at least, make it more problematic to support change in Myanmar and could, at worst, strengthen the position of hardliners and bring the whole process to an end.

This commentary originally appeared on U.S. News & World Report on October 2, 2013. Commentary gives RAND researchers a platform to convey insights based on their professional expertise and often on their peer-reviewed research and analysis.