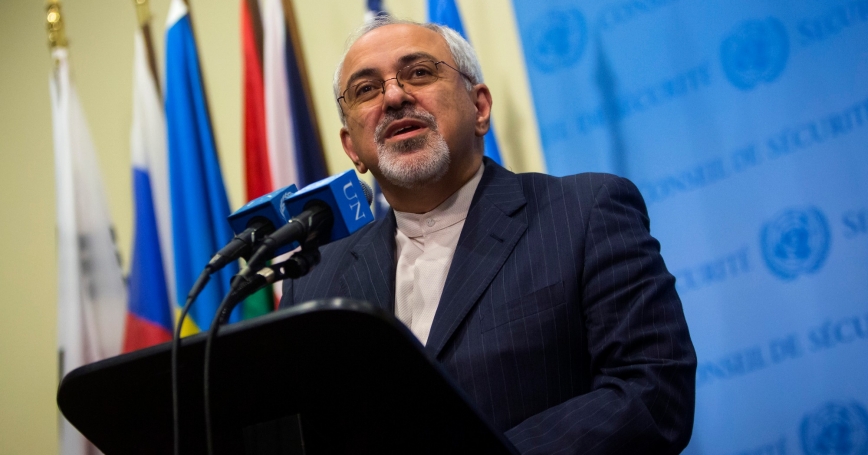 Iran's Foreign Minister Mohammad Javad Zarif speaks to the media after a meeting of foreign ministers at the U.N. Headquarters in New York Sept. 26, 2013

Iranian president Hasan Rouhani's recent charm offensive has raised expectations for a diplomatic breakthrough heading into this week's nuclear negotiations between Iran and the United States, Britain, China, France, Germany, and Russia (the so-called P5+1) in Geneva. Sanctions have taken a heavy toll on the Iranian economy, and the Islamic Republic may finally be motivated to take steps to rein in its nuclear program, including accepting limits on uranium enrichment, in exchange for lessening the pressure.

Hawks in Israel and Washington, however, have been quick to describe Rouhani as a “wolf in sheep's clothing,” warning that the Iranian regime may agree to “cosmetic changes” to its nuclear program in exchange for sanctions relief, but ultimately will do little to constrain its quest for the bomb. In particular, they have cautioned the Obama administration against acquiescing to an agreement that allows Iran to continue any domestic uranium enrichment, even at low levels suitable only for civilian nuclear power and under stringent international supervision. In his Oct. 1 speech to the U.N. General Assembly, for example, Israeli Prime Minister Benjamin Netanyahu insisted that only a complete dismantling of Iran's enrichment program could prevent Tehran from developing nuclear weapons. This position has been echoed by conservative think tanks in Washington and by numerous voices on Capitol Hill. Their collective mantra: “a bad deal is worse than no deal.”

Attempting to keep Iran as far away from nuclear weapons as possible by insisting on “zero enrichment” seems sensible. But in reality, the quest for the optimal deal would doom diplomacy with Iran, making the far worse outcomes of unconstrained Iranian nuclearization or a military showdown over Tehran's nuclear program much more likely.

Uranium enrichment is one pathway to producing bomb-grade explosive material for nuclear weapons, and all else being equal, it is easier to verify the total absence of such activities than different gradations of them. Of course, it would clearly be preferable (PDF) if Iran ended its uranium enrichment activities altogether. Moreover, most countries with civilian nuclear power plants forgo domestic enrichment, so it seems reasonable to demand the same of Tehran. (Although it is also the case that Argentina, Brazil, Germany, Japan, and the Netherlands have domestic enrichment capabilities while remaining compliant with the Nuclear Non-Proliferation Treaty.)

But while a permanent end to Iranian enrichment would be ideal, it is also highly unrealistic. The Iranian regime has invested enormous amounts of political capital and billions of dollars over decades to master the knowledge and centrifuge technology associated with uranium enrichment — and nothing will put that genie back in the bottle. Indeed, one is hard pressed to find a single bona fide Iran expert on the planet that believes Tehran would accept a diplomatic deal with the P5+1 that zeroed out enrichment for all time.

And here's six reasons why:

1. Backing an end to enrichment would be political suicide for Rouhani.

Iran's new president simply can't agree to permanently end enrichment. In 2003, during his previous role as Iran's chief nuclear negotiator, he convinced Supreme Leader Ayatollah Ali Khamenei to accept a temporary suspension of enrichment. But further talks with the international community stalled in early 2005 over a failure to agree on Iran's right to enrichment, and Tehran ended its suspension shortly thereafter. Rouhani believes — as do his critics in the Revolutionary Guard and the supreme leader — that the West pocketed Iranian concessions and Tehran got nothing in return. The failure of Iran's earlier approach under Rouhani facilitated the rise of Mahmoud Ahmadinejad and his hardline policies, including the development of a much more robust uranium enrichment capability. Rouhani is unlikely to make that mistake again. And even if Rouhani were somehow convinced to do so, he would be savaged by his right flank, significantly undercutting his presidency.

2. It's a matter of pride and principle for the regime.

The regime has invested far too much of its domestic legitimacy in defending Iran's “rights” (defined as domestic enrichment) to completely capitulate now, regardless of the pressure. The nuclear program and “resistance to arrogant powers” are firmly imbedded in the Islamic Republic's ideological raison d'etre. Khamenei, the ultimate decider on the nuclear file, and the Revolutionary Guards will not give up on the program altogether, for it could be a viewed by their supporters and opponents alike as a total defeat.

However, Khamenei may accept a deal that constrains Iran's nuclear program but still allows limited enrichment. Under such an agreement, he could tell the Iranian people: “I said we never wanted nuclear weapons and I have issued a fatwa [religious ruling] against them. I insisted that our rights be respected, and now they are.” But if Khamenei cries uncle and dismantles the entire program, how will he explain the billions invested and justify the years of sanctions and isolation to his people? What would it all have been for? Khamenei likely fears such a humiliation more than he fears economic collapse or targeted military strikes against his nuclear facilities.

3. If Iran does want to go nuclear, sanctions aren't going to stop it in time.

Although hawks believe Tehran is on the ropes and that additional sanctions can force Iran to completely dismantle its nuclear program, economic and nuclear timelines don't align. To be sure, Iran's economy is in dire straits, and a desire to alleviate the pressure is driving the regime's apparent willingness to negotiate more seriously. But despite the current pain, Iran is not facing imminent economic collapse. This may be a dark period in Tehran, but Khamenei likely believes that Iran weathered worse times during the Iran-Iraq war. Some analysts have warned that Iran could achieve a critical “breakout capability” — the ability to produce fissile material for nuclear weapons so fast that it could not be detected or stopped — sometime in mid-2014 (PDF). Yet, even if the U.S. Congress goes forward with additional harsh sanctions, the regime is not likely to implode before it reaches this technical threshold and, if it did, it might make little difference. Even the imprisoned leadership of the Green Movement and Iranian secularists opposed to the Islamic Republic support domestic uranium enrichment. The only way to stop a breakout capability is to get a deal, fast — and that means accepting some limited enrichment under strict safeguards.

4. Washington is still an effective bogeyman.

Khamenei likely believes that Rouhani's election and the Iranian president's new moderate tone provide sufficient domestic and international credibility to mitigate the downside risks of failed diplomacy. Congress could attempt to force Tehran to accept maximalist demands by increasing sanctions, but the supposed mechanism for pressure affecting Iranian calculations is the regime's fear of popular unrest. Yet, if P5+1 negotiations are seen to fail because of Washington's insistence on zero enrichment, the Iranian public is likely to blame the United Sates not the regime for the failure. Economic pressure on the regime may increase as a result, but popular pressure to change course may not.

5. Pressure will become less effective if the United States comes off as the intransigent party.

If talks collapse because of Washington's unwillingness to make a deal on enrichment — a deal Russia and China and numerous other European and Asian nations support — it will also become harder to enforce sanctions. Whether or not Rouhani's diplomatic overtures are genuine, he has already succeeded in shifting international perceptions of Iran. If the United States, rather than Iran, comes across as the unreasonable party, it will become much more difficult to maintain the international coalition currently isolating the government in Tehran. Some fence sitters in Europe and Asia will start to flirt with Iran again, leaving the United States in the untenable position of choosing between imposing sanctions on banks and companies in China, Europe, India, Japan, or South Korea, or acquiescing to the erosion of the comprehensive sanctions regime.

6. An uncompromising stance could drive Iran toward the bomb.

Finally, if talks fail because the United States insists on a maximalist position, Khamenei and other Iranian hardliners will likely interpret it as definitive proof that Washington's real goal is regime change rather than a nuclear accord. Solidifying this perception would likely enhance, rather than lessen, Tehran's motivation to seek a nuclear deterrent as the only means of ensuring regime survival.

A permanent end to Iranian enrichment is not in the cards. Instead of pushing for an impossible goal, the United States and other world powers should push for a possible one: an agreement that caps Iranian enrichment at the 5 percent level (sufficient for civilian power plants but far away from bomb-grade) under stringent conditions designed to preclude Tehran's ability to rapidly produce nuclear weapons, including restrictions on Iran's stockpile of low enriched uranium, limitations on centrifuges, intrusive inspections, and halting the construction of a plutonium reactor that could open an alternative pathway to nuclear weapons. Such an accord would allow Khamenei and Rouhani to claim Iran's “rights” had been respected, giving them a face-saving way out of the current nuclear crisis. Even this might be difficult for the Iranian regime to stomach. But if paired with meaningful sanctions relief, it has a much better chance of success than insisting on the complete dismantling of Iran's program.

Washington should not accept a bad deal. But if we are to avoid the worst possible outcomes — unconstrained enrichment leading to an eventual Iranian bomb or another major war in the Middle East — then a good-if-imperfect deal is preferable to no deal at all.

Colin H. Kahl is an associate professor in Georgetown University's Edmund A. Walsh School of Foreign Service and a senior fellow and director of the Middle East Security Program at the Center for a New American Security. In 2009–2011, he was the deputy assistant secretary of defense for the Middle East.

This commentary originally appeared on Foreign Policy on October 14, 2013. Commentary gives RAND researchers a platform to convey insights based on their professional expertise and often on their peer-reviewed research and analysis.