A First Step in Geneva 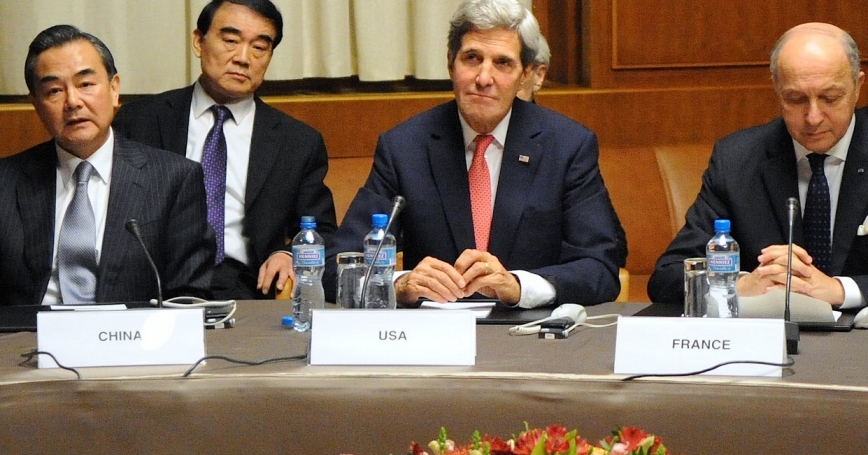 photo by U.S. Dept. of State

The Geneva nuclear deal between Iran and the P5+1 (United States, Britain, France, Russia, China, plus Germany) is the first real positive development in the Iranian nuclear crisis in at least 10 years. The 2002 revelation of Iran's nuclear facilities spawned a decade of increased hostility between the United States and Iran, not to mention a heated rivalry between Tehran on one hand, and Tel Aviv and Riyadh on the other. In the past decade, Iran has not only faced the threat of war, but also the reality of sanctions that have caused untold misery among the Iranian population. President Mahmoud Ahmadinejad's (2005 to 2013) often vitriolic rhetoric and policies proved a stumbling block to a negotiated settlement of the nuclear crisis. But Hassan Rouhani's election as president this summer has provided a path forward.

The Geneva agreement is only a first step toward a comprehensive deal. But it is an important achievement. Iran's ability to move toward a nuclear weapons breakout capability has been halted in return for limited sanctions relief. The next six months will be crucial as Iran and the P5+1 negotiate a comprehensive deal; Israel, Saudi Arabia, and much of the U.S. Congress are highly skeptical of Iran's intentions, and the overall U.S. approach. And Iranian hardliners may stand ready for an opportunity to pounce on Rouhani. Nevertheless, the Geneva deal is a positive development for all parties, including Israel and Saudi Arabia, even if they do not recognize it as such.

The agreement imposes significant limitations on the Iranian nuclear program. Tehran has agreed to halt the construction of the heavy water reactor in Arak; oxidize 20 percent enriched uranium which is just steps away from the level necessary to be used for a weapon; stop installment of more advanced centrifuges; and perhaps most importantly, allow daily inspection of its enrichment facilities by the International Atomic Energy Agency (IAEA), ensuring that it cannot move toward a weapons capability using its declared facilities without the knowledge of the international community.

In return, Iran will be provided with limited and reversible sanctions relief, including access to frozen funds, easing of sanctions on the auto industry, and the ability to sell petrochemicals. The sanctions relief package is estimated to total between $6 and $7 billion, a rather modest concession given the accepted limits on the nuclear program. The P5+1, while not explicitly recognizing Iran's declared right to enrich uranium, nevertheless appears to have implicitly acknowledged the reality of Iran's advanced uranium enrichment program. Tehran will still enrich uranium at lower levels, a “red line” the Iranian regime vowed it would not cross.

The end of the Ahmadinejad presidency facilitated the current deal. But the intense pressures faced by the Iranian regime no doubt played a major role. In the past four years, the Islamic Republic has suffered one blow after another: the 2009 Green uprising and major divisions within the regime; the possible loss of its ally in Syria and the endangerment of Hezbollah, Iran's closest ally in the Middle East; crippling sanctions against the Iranian central bank and energy sector; and increasing popular dissatisfaction with Iran's failing political and economic system.

Rouhani, a relatively moderate conservative, won the presidential election by promising an improved economy, which could only be achieved through the lifting of sanctions via a nuclear deal. He was one of eight candidates allowed to run by the watchdog Guardian Council, and was widely viewed as the more pragmatic choice. Rouhani has thus far not seriously addressed Iran's abysmal human rights record, or its relative lack of social and political freedoms. It remains to be seen whether he has the authority or will to address issues beyond the nuclear program. But on the latter, he appears to have the backing of Supreme Leader Ayatollah Ali Khamenei and the Revolutionary Guards. They badly needed a deal. The regime, which is highly dependent on oil revenue, faced an impending economic crisis, and possibly the wrath of its own people.

Khamenei, a famously inflexible leader, adopted a policy of “heroic flexibility” and urged Iran's negotiating team, including the suave Foreign Minister Mohammad Javad Zarif, to find a way out of Iran's impasse while protecting Iran's “nuclear rights.” Khamenei ordered the conservative establishment not to criticize the negotiators. So far, Iranian hardliners, especially those associated with the Revolutionary Guards and security establishment, have reason not to undermine Rouhani or the Geneva deal. But a failure to achieve a comprehensive deal, especially due to new congressional sanctions, could mobilize them against more pragmatic factions associated with Rouhani.

The Israeli government, along with Saudi Arabia, has vociferously opposed the Geneva deal. The Israeli response is motivated by a largely justifiable deep sense of distrust and skepticism toward Iran. The Islamic Republic's historical pattern of deception on the nuclear program cannot be discounted, and even a comprehensive deal will not end Tehran's support for anti-Israeli and anti-Saudi groups such as Hezbollah or the Syrian Assad regime. However, the Geneva deal provides a verifiable mechanism that can detect an Iranian breakout capability. Neither Tel Aviv, nor Washington for that matter, can ignore the possibility of undeclared secret nuclear facilities, or of Iran reneging on a deal. But Rouhani's election and the immense pressures faced by Khamenei indicate a real willingness to be flexible on the nuclear program.

Geneva is a first step in what may prove to be a long road ahead. Israeli opposition and the possibility of new sanctions by the U.S. Congress can complicate or even derail a comprehensive deal. And Iran, a long rival to U.S. influence in the Middle East, will not change overnight. Khamenei's concept of “heroic flexibility” does not equal surrender, nor does it suggest a wholesale change in behavior. But for now, the Iranian nuclear program has been halted, and the possibility of a military conflict between Iran and the United States has diminished. Additionally, the suffering people of Iran will have a bit more space to breathe. Nevertheless, an ideal Iran — a country at peace with its own people and the world — is still a distant reality. We can hope Geneva is the first step in that direction.

This commentary originally appeared on Foreign Policy on November 25, 2013. Commentary gives RAND researchers a platform to convey insights based on their professional expertise and often on their peer-reviewed research and analysis.