A Year After Sandy, a New Threat to New York City 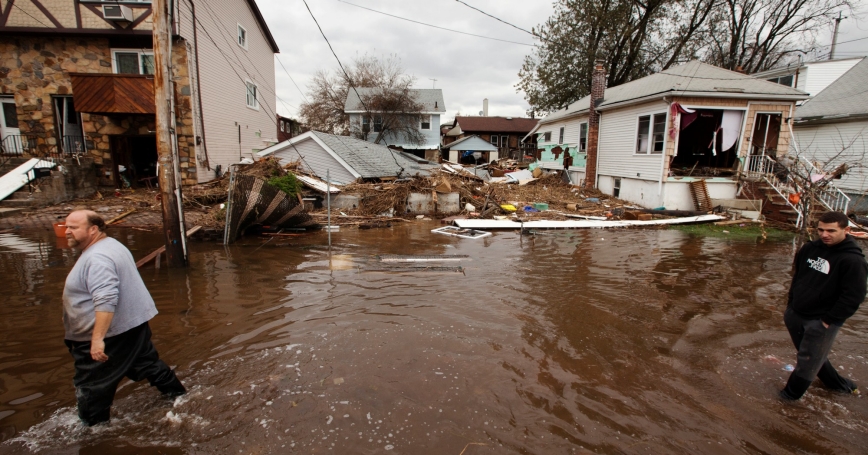 One year after Hurricane Sandy came barreling up the Atlantic Coast lashing the Northeast with winds, waves and devastating floods, residents of New York City's coastal areas may face a new threat that could wash even the hardiest storm survivors from their homes.

As residents persist in their struggle to recover from one of the most destructive storms in U.S. history, they are about to confront dramatic changes in the flood insurance landscape. Expected changes to federal floodplain maps will mean thousands of New Yorkers will suddenly be living in areas designated as high-risk flood for the first time. And living in high-risk areas will send their flood insurance rates soaring when these new maps are adopted in 2015.

Reform of the federal program that helps property owners insure their properties is long overdue. But without steps to help residents of these newly vast high-risk flood zones, some people may be forced to either leave their homes or face the next storm without insurance. But through mitigation and policy reform, New York City has the means to lessen the pain.

The percentage of structures with flood insurance in the current high-risk areas is not high. Approximately 4 percent of New York City structures are in areas currently designated as high risk, and most of these (72 percent) are homes for one to four families. We estimate that 55 percent of one- to four-family structures in the current high-risk areas carry flood insurance. For those required to carry flood insurance because they are financed with a mortgage from a federally regulated lender, the take-up rate is about two-thirds. For those that are not subject to this mandatory purchase requirement, the take-up rate is only about 20 percent.

Some 28,800 one- to four-family structures will be reclassified as in high-risk areas when the new maps become official. These structures were not built to floodplain standards and some could see their flood insurance premiums spike by a factor of ten, or more. For example, a structure with a current annual premium of $429 could see that rate rise to $5,000, even $10,000, once it is reclassified as being in a the high-risk area. In many, but not all, cases, Congress directed that these rate increases be phased in over five years.

The coming changes include major revisions to the decades-old floodplain maps drawn by the Federal Emergency Management Agency (FEMA) and reforms to the government-backed National Flood Insurance Program (NFIP). The NFIP was set up in 1968 to provide flood insurance, sometimes at subsidized rates, to property owners in communities that agree to adopt minimum standards for new buildings in floodplains. The program is now deeply in debt.

Mindful of the NFIP's unsound financial footing, Congress last year enacted a law that would phase out subsidies for certain structures and eliminate a grandfathering provision that allows properties remapped into high-risk zones to continue to pay rates based on the old maps.

Although the changes will provide a much more accurate basis for assessing flood risk and setting premiums that reflect those risks, they also will impose financial burdens on some of the very people who are still reeling a year after Superstorm Sandy struck.

One way to keep premiums down in the face of these changes is to lessen the threat. New York City is considering a range of options that could reduce risk and thus flood insurance premiums. These include projects at the community level such as dunes, bulkheads, or levees. They also include programs at the building level, such as elevating buildings. However, some mitigation efforts that have worked in other regions might not work in New York City's urban environment. For example, an initial analysis by the New York City Mayor's Office found that 39 percent of buildings in the high-risk zones are not good candidates for elevation. Further work is needed to understand what responses make the most sense in New York City and to make sure that whatever mitigation measures are taken are appropriately reflected in NFIP premiums.

Programs are also being considered to reduce the financial impact of higher premiums on lower-income households. This assistance could take several forms, including tax credits, grants, and vouchers that could be applied toward the costs of flood insurance. It might also come through allowing much higher deductibles, with the accompanying lower rates, and a program that would cover part of the large deductible should a loss occur.

If they are to find the best solutions, policymakers will need better data on the characteristics of the structures in the high-risk zones. Particularly important is more complete information on structure elevation relative to the flood level. Also important is better information on household incomes in the areas hardest hit by premium increases. Challenging issues, such as funding sources and program duration, will also have to be considered.

Policymakers also need to be concerned about the take-up rates for flood insurance. Higher take-up rates mean that more resources are available for recovery after an event. They also mean that property owners directly see the cost of living in high-risk areas and the benefits of risk mitigation measures that can reduce rates. In addition, the very low take-up on structures in high-risk areas that are not required to carry flood insurance should not go unaddressed.

Sandy will not be the last hurricane to strike the region. But New York City is America's leader in so many areas. By taking action now, community resiliency and readiness can be among them.

Lloyd Dixon is director of the RAND Center for Catastrophic Risk Management and Compensation and a senior economist at the nonprofit, nonpartisan RAND Corporation.