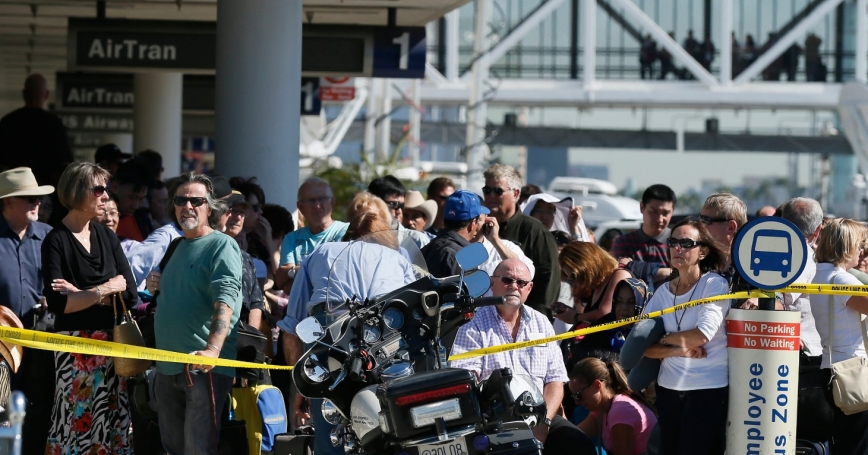 Shootings at airports are nothing new. In fact, they have regularly occurred worldwide in recent years. The motives have included terrorism, crime, and mental illness.

This was not the first shooting at LAX. In July 2002, an Egyptian chauffeur opened fire on passengers at the El Al counter, killing two before he was killed. The incident was labeled an act of “terrorism” because of the target, although the subsequent investigation showed no evidence of any connection between the shooter and any terrorist group or of self-radicalization.

Motives can be complicated. An individual may be both mentally disturbed and politically motivated at the same time. The two domains are not mutually exclusive. Terrorism does not attract the well adjusted. Deeply disturbed individuals may operate in political universes of their own invention.

In 1974, a mentally disturbed individual calling himself the “Alphabet Bomber” detonated a bomb at the Los Angeles airport, killing four and wounding 36. At trial, he claimed that he was a member of “Aliens of America,” which he intended to spell out with bombs beginning with 'A' for airport. The organization existed entirely in his imagination.

A clear-cut terrorist plot was uncovered in 1999 when alert U.S. Customs officials intercepted a terrorist with an explosive device in his car at the Canadian border. He was headed to Los Angeles where he planned to detonate his device at the International Terminal of LAX.

An event like this inevitably leads to calls to increase airport security. In reviewing how this incident was handled, we have to keep in mind that security for the easily accessible public space of the airport — the check-in counters and baggage pickup areas — differs from the security at checkpoints, which aim at keeping weapons off airliners.

Why not put the entire airport within a security perimeter? The problem is that increasing security in the public areas of terminals offers little net security benefit. That is, tighter security would only displace risk from the airport to other crowded public places — movie theaters (recall the shooting at a theater in Aurora, Colorado), shopping malls (recall the recent terrorist assault at the shopping mall in Nairobi), or crowded tourist sites (recall the terrorist attempt to detonate a car bomb in New York's Times Square). Moving the threat elsewhere might be good for the airport, but offers no overall improvement to public security.

A 2004 RAND study concluded that the casualties from a large terrorist bomb at LAX could be reduced by thinning the density of people in the publicly accessible area of the airport. This could be achieved by increasing the number of check-in and screening personnel. It would hardly change the outcome of a shooting incident.

Details about Friday's response are still being examined, but it raises the question of whether TSA personnel should be armed. This question first came up when TSA was created. There were many objections to arming TSA personnel. It would create another armed federal force. It would change the recruiting demographic and require more extensive training. It would increase costs. It would be objectionable to many.

The Los Angeles Airport Commission operates its own police department, the Los Angeles World Airport Police (LAWAPD). There is also a contingent of the Los Angeles Police Department (LAPD) at the airport. The LAPD handles serious crimes and responds to major incidents.

An active-shooter incident requires flawless coordination among law enforcement, emergency personnel and other entities. At LAX, both the LAWAPD and the LAPD would immediately respond. Both have been trained in active-shooter response like the Multi-Assault Counter-Terrorism Action Capabilities program. Although LAPD has the more experienced Special Weapons and Tactics (SWAT) team, which has deployed to counter active shooters on several occasions, LAPD SWAT would be a secondary responder in most, if not all cases.

The details of the LAX shooting are coming out slowly, but it appears the shooter who reportedly already may have been suicidal, also may have subscribed to anti-government notions that led him to target TSA personnel. Still all the questions about the incident and the law enforcement response will not be answered until all the facts are in.