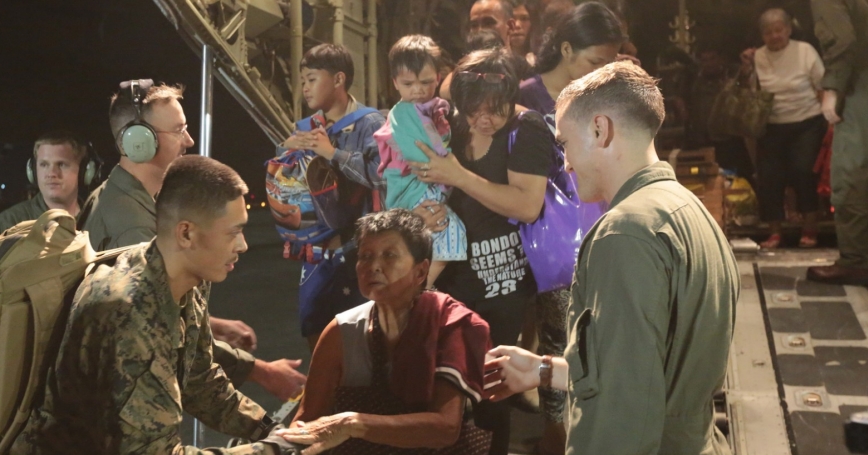 U.S. Marines help displaced Philippine nationals from the back of a KC-130J Super Hercules at Vilamor Air Base, Manila, Republic of the Philippines

The storm that ravaged the Philippines this weekend was off the charts, so powerful that it has been dubbed a “super typhoon.” As of Monday, authorities estimated that more than 10,000 had perished, making the typhoon the deadliest natural disaster in that nation's history.

The United States immediately dispatched relief and troops to aid the Philippines. Though Americans have prided themselves in helping countries in need, its latest effort raises a sensitive but practical question: In a budget-constrained environment, how much importance should be placed on international disaster relief? And should this be a key mission for the Pentagon or be left to civilian agencies?

Humanitarian assistance and disaster relief sit in a no man's land between diplomacy, charity and military action. When the U.S. responds to natural disasters abroad, it typically taps the resources of the State Department, the U.S. Agency for International Development, and non-governmental organizations and branches of the government ranging from NASA to the National Oceanic and Atmospheric Administration.

Often, however, the most valuable resources are from the military. In the early days of a disaster, there is no substitute for helicopters, cargo planes and multipurpose naval vessels. There is also no substitute for pilots and technical experts trained to operate in exceptionally challenging conditions.

At a human level, the case for devoting U.S. military resources for disaster relief is compelling. Super Typhoon Haiyan, for example, virtually obliterated the city of Tacloban, leaving survivors scavenging for food and water. The remains of a hospital have been reduced to providing only first aid. Supplies that arrive at a nearby airport could not be transported until the roads were cleared of trees and debris. Elsewhere, aid sent by the Red Cross, the United Nations, private charities and foreign governments might have no way of reaching many of the victims in time to save them. In the wake of Haiyan — as was the case in the wake of disasters such as the Asian tsunami of 2004 — there is no substitute for the capabilities of the U.S. military.

At the level of national interest, however, does the case for tasking the U.S. military to international natural disasters hold up — particularly in a time when the Pentagon has seen its budget slashed? A cold-eyed evaluation would suggest yes.

The best battle is the one you don't have to fight. Most of the deployment of U.S. military resources is preventive: The U.S. stations troops throughout the world in the hope of shaping the political environment so as to avoid sending them into combat. The U.S. conducts training exercises with almost every nation it can, in part to decrease the likelihood of conducting actual warfare. Even in a war zone such as Afghanistan, the primary mission of the U.S. military now is training rather than combat.

In these terms, deploying military resources for disaster relief is a remarkably effective — and inexpensive — investment in the future. One of the largest such deployments in history, the deployment of the aircraft carrier USS Abraham Lincoln and other assets following the Asian tsunami of 2004, is estimated to have cost $857 million. That's roughly the price of three days' operations (PDF) in Afghanistan last year.

The goodwill the tsunami relief brought the U.S. is incalculable. Nearly a decade later, the effort may rank as one of the most concrete reasons Southeast Asian nations trust the long-term U.S. commitment to a strategy of “Asian rebalancing.”

The Obama administration recognizes the value of disaster relief. As the Pentagon attempts to shift more of its weight to the Asian Pacific region while balancing a shrinking budget, this could turn out to be one of the best decisions it could make.

Jonah Blank is a senior political scientist at the non-profit, non-partisan RAND Corporation and a former policy director for South and Southeast Asia on the Senate Foreign Relations Committee.

This commentary originally appeared in USA Today on November 11, 2013. Commentary gives RAND researchers a platform to convey insights based on their professional expertise and often on their peer-reviewed research and analysis.