Just Ignore Karzai and Press On 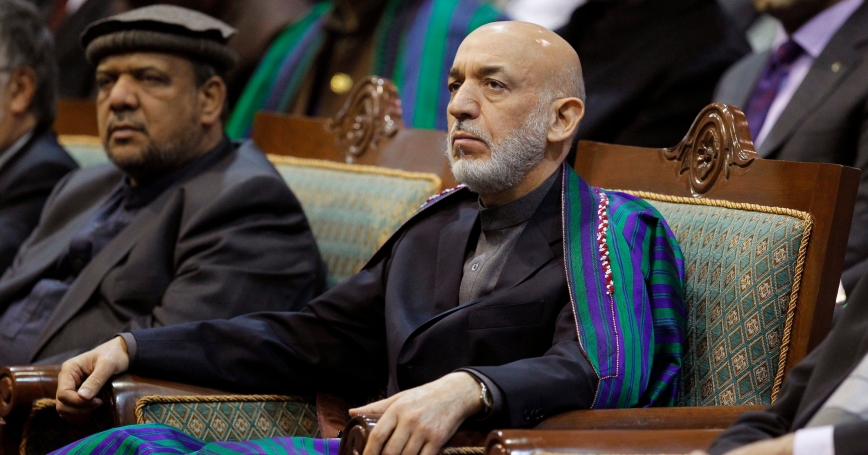 Uncertain signals from the Obama administration have sapped Afghans' confidence in the future.

Just as U.S. and Afghan negotiators reached an agreement to keep U.S. forces in Afghanistan through 2024, Afghan President Hamid Karzai blinked. Mr. Karzai now wants the agreement signed after the 2014 presidential elections, when there will be a new Afghan leader. The Loya Jirga, or consultative assembly, that met last week endorsed the deal and asked Mr. Karzai to sign it before the end of this year.

While the current impasse may further tempt the United States to rethink its long-term commitment to Afghanistan, that decision would be rash. The Obama administration should publicly acknowledge its desire to keep a U.S. military presence in Afghanistan after 2014, while U.S. and Afghan officials go back to the drawing board. The administration should not make the mistake it did in Iraq when it failed to reach an agreement with the government, withdrew all U.S. military forces, declared victory, and then watched al Qaeda resurge in Iraq and neighboring Syria.

As I witnessed in my last trip to Afghanistan two months ago, there is substantial uncertainty among Afghans about the future of their country. In the absence of a forceful commitment from the U.S., most Afghans—and neighboring countries—have assumed that U.S. forces will be leaving.

This uncertainty has had serious costs. It has contributed to a rise in the number of visa requests from Afghan officials, encouraged power brokers to put their resources into sub-state militias rather than Afghan National Security Forces, emboldened the Taliban to postpone serious peace talks, and raised the possibility of capital flight from the country.

More important, the departure of U.S. forces (and NATO partners would be sure to follow) would allow al Qaeda and other terrorist groups to increase their presence in Afghanistan. While I was in Afghanistan, several senior American military and intelligence officials expressed concern that al Qaeda's closest allies, including the Pakistan-based Haqqani network, were already gaining ground in eastern Afghanistan, following the closure of dozens of U.S. military bases.

As important as a bilateral security agreement is to formalize America's long-term presence in Afghanistan, the current draft doesn't spell out the details of a U.S. military presence after 2014, including the size, composition and strategy of U.S. forces. Those details are what matter most.

Some U.S. administration officials still support withdrawing all forces or leaving behind a token force, which could include as few as a thousand U.S. special-operations forces to kill or capture al Qaeda terrorists. But such a small component would have little-to-no mandate or capabilities after 2014 to assist the Afghan government if the Taliban threatened to overrun a major city or even topple the government. In Iraq, al Qaeda has regrouped since 2011. It conducts attacks at a high tempo and was instrumental in establishing an affiliate, Jabhat al-Nusra, in Syria.

A better option would be to retain between 8,000 and 12,000 American forces, plus additional NATO forces. Their mission should be to conduct strikes against terrorists and—most importantly—to train, advise and assist Afghan national and local forces in counterinsurgency operations. Several “enablers” would be essential to support these forces, such as unmanned aerial vehicles, medical evacuation capabilities, force protection, attack aircraft and intelligence personnel.

The bulk of these units should be U.S. special-operations forces, which are trained to work with indigenous forces in hostile environments. The goal of U.S. forces should be to work themselves out of a job as Afghans engage in most of the fighting. U.S. special-operations forces have conducted similar successful missions in the Philippines, Colombia and other countries.

As whimsical as Mr. Karzai can be, it would be imprudent to let a lame duck Afghan president undermine U.S. national security interests. And the stalled bilateral security agreement may not be the most significant problem.

The administration hasn't yet made a forceful, public case for keeping U.S. forces in Afghanistan past 2014, with specifics of what a U.S. commitment would look like. It needs to do that now.

Seth Jones is associate director of the International Security and Defense Policy Center at the Rand Corp. and a former adviser and plans officer for U.S. special-operations forces in Afghanistan. He is co-author, most recently, of “Afghanistan After the Drawdown,” a Council on Foreign Relations special report.

This commentary originally appeared in The Wall Street Journal on November 25, 2013. Commentary gives RAND researchers a platform to convey insights based on their professional expertise and often on their peer-reviewed research and analysis.