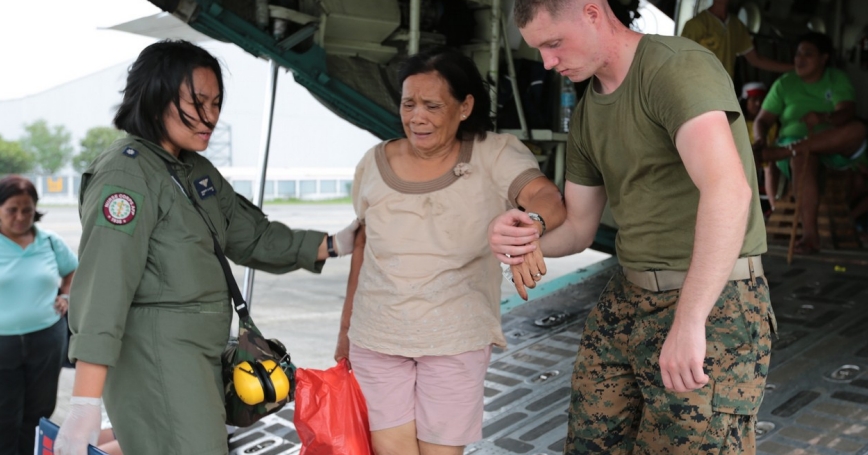 A U.S. Marine and a Philippine airman assist an injured Filipino woman off a KC-130J Super Hercules at Vilamore Air Base, Manila, Republic of the Philippines

On Saturday, at the request of the Philippines Government, Secretary of Defense Chuck Hagel instructed Pacific Command to support humanitarian relief operations associated with the aftermath of Typhoon Haiyan. Logistics support, including maritime search and rescue, medium-heavy lift, fixed wing support and enablers will be provided. The Department of Defense has touted the importance of a “whole of government” approach to disaster relief that would integrate U.S. military and civilian agency assistance and link directly with those on the ground in affected countries.

This is a laudable and important effort, but it is an area where the U.S. government could stand to improve.

Prior responses to other recent disasters offer important lessons. One is that having too many responders can be as problematic as having too few. Our report, "Lessons from Department of Defense Disaster Relief Efforts in the Asia-Pacific Region," looked at relief efforts in Burma, Indonesia, Pakistan and Japan and found that precious time was sometimes wasted putting into place coordination mechanisms that could have been set ahead of time. Our research also showed that poor coordination can clog response systems that are already under great strain and, by creating redundancies, waste resources that could save lives.

During and after the multiple disasters in Japan in 2011, the sharing of real-time information among all U.S. government actors was problematic. Lacking a prearranged plan to share information through public or official communication channels, the U.S. military tended to share information via classified systems and informally through various personal networks. Decisions regarding where and how assistance would be provided were often made in a rather closed network that did not systematically include civilian agencies, allies, partners and NGOs.

Many times, civilian agencies on the ground are better positioned to know what assistance is needed and what can actually be absorbed. Failure to properly communicate on the population's needs resulted in inadequate supplies being provided in the aftermath of Cyclone Nargis that struck Myanmar in May 2008.

Another important lesson is that these issues can be addressed by emphasizing disaster preparedness instead of simply focusing on the response once a disaster strikes. Regular security cooperation engagements offer an opportunity to set in place the institutions, bilateral and multilateral agreements and personal relationships that can be activated quickly when disaster strikes.

In many cases, all the pieces needed to build such readiness are already in place. The DoD has the ability to improve its information flow to other partners through its existing All-Partners Area Network, provided all relevant agencies are granted access and know how to use the system. The same exercises and simulations that the United States routinely conducts with partner militaries could be extended to U.N. agencies and non-governmental organizations — which provide the better part of disaster assistance — in order to build the ability to operate together in disaster-struck areas. Such operational exercises would help establish standard operating procedures for disaster relief, while at the same time building the trust and relationships that will ensure a smooth and efficient response when the next typhoon or earthquake hits.

As the United States rebalances toward Asia — a region of the world that bears the brunt of more than half of the world's natural disasters — humanitarian assistance and disaster relief is bound to become an even more frequent mission of the U.S. military than it is already. Improved preparedness and efficient coordination mechanisms can help ensure that, when time is of the essence, the United States provides the most effective response.

This commentary originally appeared on U.S. News & World Report on November 12, 2013. Commentary gives RAND researchers a platform to convey insights based on their professional expertise and often on their peer-reviewed research and analysis.