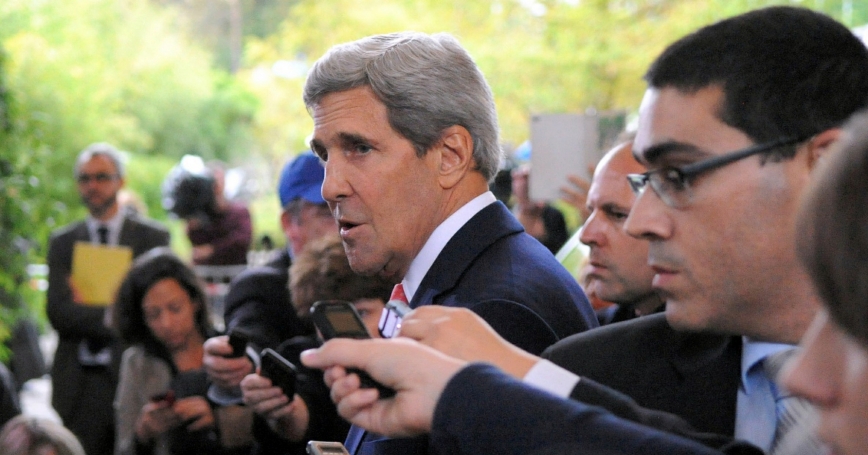 U.S. Secretary of State John Kerry addresses an international assembly of reporters upon arriving in Geneva

Iran and the P5+1 (the U.S., Britain, France, China, and Russia plus Germany) came tantalizingly close to reaching a nuclear deal this past weekend in Geneva, but the talks ended without an agreement.

Although both Iran and the United States expressed optimism that much was achieved, a blame game between the different players soon ensued.

The international media reported that the French Foreign Minister had “sabotaged” the talks at the last minute, while Secretary of State John Kerry stated that Iran had walked away from a deal.

Iranian Foreign Minister Mohammad Javad Zarif in turn blamed the United States for “gutting” the deal at the last minute.

The failure to achieve a deal in Geneva has given members of Congress, Israel, and Saudi Arabia a chance to mobilize against what they view as a “bad” deal.

All the countries involved undoubtedly want to prevent an Iranian nuclear weapons capability, but the Middle East's geopolitical balance is also at play.

Israel and Saudi Arabia fear that a U.S.-Iran rapprochement may hurt their interests, while France appears to view negotiations as a means to enhance its influence with Tel Aviv and Riyadh.

Meanwhile, the U.S. government faces perhaps the hardest and most complicated task of all: to stop Iran's nuclear program, reduce tensions with Tehran, mollify its closest allies, and achieve a deal in the face of fierce opposition at home.

French Foreign Minister Laurent Fabius was reportedly concerned that the agreement between Iran and the P5+1 did not adequately address Iran's Arak heavy water reactor.

Reputable organizations such as the Arms Control Association have identified Arak as a long-term proliferation concern that can be addressed in the later stages of nuclear negotiations.

It appears that while Iran would not complete Arak under the first step of the proposed nuclear agreement, it would have nevertheless been able to continue Arak's construction.

Israel is also particularly worried about Arak, as it could provide Iran with a plutonium-based option to produce nuclear weapons.

The Israelis would also be unable to bomb Arak once it's completed, as a military strike would create an environmental catastrophe affecting the whole region.

France may have had other motivations in taking a harder line and obstructing what appeared to be a done deal.

Regional American allies such as Israel and Saudi Arabia are unhappy about U.S. policy in the Middle East.

Tel Aviv, which saw Iran become ostracized and increasingly weak under President Mahmoud Ahmadinejad, fears that the new Iranian president Hassan Rouhani will be able to dig Iran out from its state of crisis and restore its position as a major player in the region.

Israel has demanded the full dismantling of Iran's nuclear program, perhaps knowing that this unrealistic objective may create enough congressional pressure to scuttle a possible détente between Tehran and Washington.

The Saudis also disapprove of U.S. policies in the region, particularly in light of the Arab Spring.

They see the Obama administration's “abandonment” of Egypt's Hosni Mubarak and its lack of ironclad support for the embattled and repressive Bahraini monarchy as signs of American fecklessness, or at worst, a lack of U.S. commitment to Saudi security.

Riyadh is particularly unhappy about the U.S. decision not to attack and ultimately overthrow the pro-Iranian Assad regime in Syria.

France appears to have sensed an opportunity to exploit this, and is eager to shore up its alliance with Israel and Saudi Arabia, and perhaps sell more weapons to each.

The struggling French economy could not only benefit from weapons sales, but could attract even more Saudi investments in important economic sectors such as agriculture.

For their part, Rouhani and Zarif are eager to increase Iran's regional influence by striking a nuclear deal that lifts sanctions while allowing Iran to save face by keeping a significant portion of its nuclear capabilities.

This would allow Iran to fully resume its oil and natural gas exports, and attract much needed Western investment into its energy sector.

Major economic powers such as the UK and Germany, which supported the Geneva deal, may be eager to resume their commercial relations with a more pragmatic and less ideological Islamic Republic.

The French may not be welcomed in Tehran for some time to come.

As for the United States, a nuclear deal would not only stop nuclear proliferation in the Middle East, but also decrease tensions with Iran, which, while weakened by sanctions and isolation, is still capable of destabilizing the Persian Gulf and wider Middle East.

Reduced tensions with Tehran would also allow Washington to lessen its dependence on Gulf Arab states.

American partners such as Saudi Arabia appear to perceive some of their interests as diverging from those of the world's remaining superpower. A more balanced relationship could therefore benefit both sides.

However, a nuclear deal with Iran will not likely change the fundamentals of the U.S.-dominated regional order.

Neither France nor any other foreign power can replace the United States as the region's security guarantor.

Saudi Arabia is highly dependent on U.S. weaponry and military technology and needs the United States to deter regional powers such as Iran.

Despite tensions between Washington and Tel Aviv, the Israeli government is unlikely to find a more committed and powerful ally than the United States.

And even Tehran, faced with tremendous economic pressure, needs America more than it would like to admit.

The blame game in Geneva should come as no surprise; the stakes are high for all countries involved, and each one is nervous about its own interests.

But instead of suspecting American motives, Israel and Saudi Arabia should realize that a nuclear deal is meant to preserve a regional order that has benefitted both countries.

Much in the Middle East has changed in the last few years, but America's fundamental interests and commitments remain the same.

This commentary originally appeared on lobelog.com on November 13, 2013.