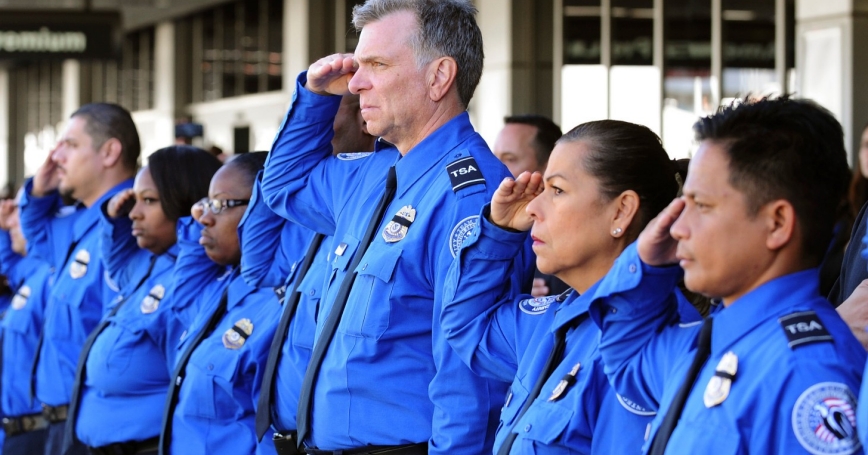 A line of TSA personnel salute the U.S. Honor Flag procession as it leaves LAX at a ceremony in memory of TSA agent Gerardo Hernandez November 6, 2013

The recent shooting at Los Angeles International Airport has raised questions about how airport security can be improved, specifically, whether Transportation Security Administration airport screeners should be armed. In part, this reflects the natural tendency to examine every terrible event with a view of how to prevent its recurrence. But it also reflects the desire of Americans to create a risk-free society. From this perspective, a shooting with casualties like the one at LAX can only be the result of a failure of security, which therefore must be increased.

Securing crowded public places is difficult, disruptive and costly. Securing an airport check-in area would require the creation of a physical security perimeter at the entrances to the terminals where passengers arriving with luggage would undergo preliminary screening. But shootings and bombings can also take place in the baggage pickup areas, so these also would have to be secured.

Security measures at the entrances would create lines of people waiting to be screened who would be vulnerable to attack outside the terminal. A RAND Corp. study recommended mitigating the potential casualties that might be caused by a bomb by speeding up the check-in and security check procedures, thereby thinning the crowd. But this would not have significant effect in a shooting incident.

Rapid response is the main means of mitigating casualties in such incidents. A shooter determined to kill as many people as possible continues killing until he shoots himself or is neutralized by police. So why not arm screeners?

Undoubtedly, armed screeners at LAX could have confronted the shooter before police intervened. Whether a gunfight at the checkpoint would have resulted in fewer casualties than occurred, we cannot say. If, however, the shooter's objective had been to cause as many casualties as possible — rather than focus on TSA personnel — armed screeners might have helped. But arming screeners raises issues beyond this incident.

Arming screeners would change the demographic of recruiting for the TSA. Some screeners are older, retired people who might not feel comfortable carrying weapons. Arming screeners would add to training requirements at the beginning and on a continuing basis to remain qualified. It would undoubtedly alter pay scales. A decision to arm would also raise questions about the TSA's authority. Would armed screeners also be given arrest powers? What liabilities would be incurred?

Would armed screeners be effective in responding to an armed assault? Shootouts in crowded areas are extremely dangerous. The risks of casualties resulting from friendly fire are high. Police at airports undergo specialized training to engage shooters. Officers at the airport, both from the airport police and the Los Angeles Police Department, are trained in “active shooter” response. Passengers wounded or killed by friendly fire would create a public relations catastrophe for the TSA. The public accepts that this may happen when police are obliged to use deadly force, but there is already a measure of public hostility toward the TSA. Perceptions matter.

Some of these questions arose when the TSA was first created. The objective then was to ensure more effective screening than that provided by private contract personnel, whose performance was often abysmal. But there were strong objections to creating another federal force, let alone arming it. And with its current 47,000 screeners, an armed TSA would become the federal government's largest armed entity outside of the military.

In the eyes of many, arming TSA screeners would change the image of the organization from a service aimed at guaranteeing safe air travel to an unwanted imposition of federal authority.

The decision made at the creation of the TSA was to focus on screening. Arrests, and armed response if necessary, would remain the responsibility of local police. The federal government requires that airports have sworn, armed police officers available at the checkpoints. They do not have to stand behind the checkpoints as sentries, but they should be able to respond rapidly. If the threat indicates more security (visible or undercover) is required, then it is the responsibility of the local authorities.

Since its creation, the TSA has formed Visible Intermodal Prevention and Response, or VIPR, teams, deploying them according to threat assessments or on a random basis at train stations and other transportation venues. They are made up of local law enforcement officers, federal air marshals, TSA behavioral detection officers, bomb-sniffing dogs and other special capabilities. These teams are armed. (And their existence is seen by some as evidence of creeping government tyranny, giving a hint at the reaction to arming airport screeners.) VIPR teams are meant to be a deterrent and a preventive force, not an armed response.

What happened at LAX was a tragedy of a type that has become all too common. The answer in every case cannot be to further ramp up security, create more perimeters or deploy more armed guards.

Brian Michael Jenkins is senior adviser to the RAND Corp. president and the author of “Al Qaeda in Its Third Decade: Irreversible Decline or Imminent Victory?”

This commentary originally appeared in Los Angeles Times on November 7, 2013. Commentary gives RAND researchers a platform to convey insights based on their professional expertise and often on their peer-reviewed research and analysis.