A New Way to Measure Public Opinion of Health Reform 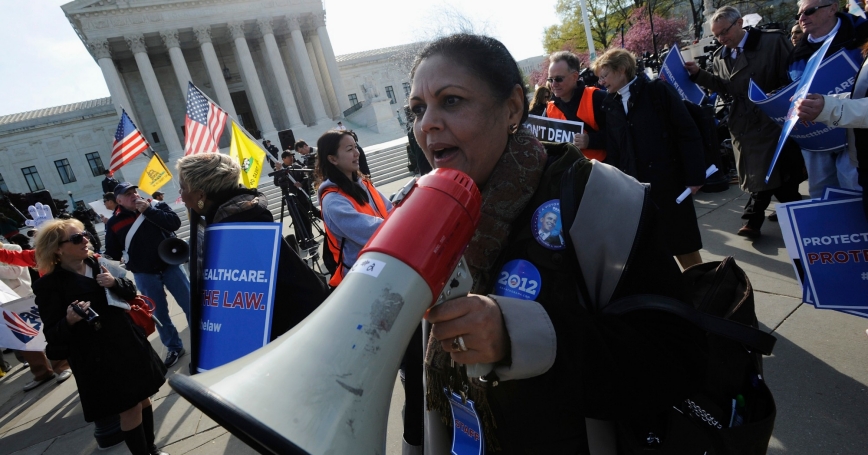 Since the Affordable Care Act (ACA) was signed into law in 2010, public opinion of the sweeping reform has fluctuated significantly. As full implementation of the ACA begins on Jan. 1, and as people begin to gain firsthand familiarity with the law's provisions, it is possible that perceptions of the law could begin to stabilize.

Whether the public will begin to settle on an overall positive or negative perception of the law is very much an open question. But understanding how opinion of the law evolves over time could offer valuable insight into Americans' appetite both for the ACA and for health reform more broadly.

Unlike traditional polling methods, the RHROS is designed to shed light not just on public opinion of the ACA at a given time, but also how opinions about the law change on an ongoing basis.

To do this, we survey the same respondents each month, as opposed to contacting a different group of people for each survey, as most others do. Using a panel in this way helps avoid random fluctuations in results. The RHROS observes the evolution of opinion over time.

Our study leverages the American Life Panel, which consists of approximately 5,500 respondents. We split the panel into four random subsets, each of which receives the survey in a given week of each month so all respondents are surveyed once per month on a staggered, weekly basis. For instance, group one is always surveyed during the first week of the month, group two during the second week, and so forth.

As we receive each week's results we'll post new information to the RHROS website about public opinion in the previous week and how it has changed over the past month. Approximately once per month, we'll supplement this information with an in-depth discussion of findings, right here on The RAND Blog.

One key advantage of our methodology is that we track respondents' movements from any of the three response categories — “favorable,” “unfavorable,” and “don't know” — to another on an ongoing basis.

Our methodology allows us to observe these shifts in public opinion that otherwise slip through the cracks.

In this, our first release of the data, we found that public opinion of the ACA became increasingly negative between September and the end of November.

However, based on data from the first two weeks of December, the trend towards negative opinion seems to be subsiding. Whether this will continue remains to be seen.

While overall negative opinion has increased between November and December, there has also been a significant amount of churn. Not only are some people becoming more negative, as would be expected by the overall trends, but a number of people are also becoming more positive.

Furthermore, many people are in the “don't know” category, suggesting that some may lack the information necessary to make a judgment.

From the first week of November to the first week of December, when the same group of respondents was approached again, roughly one quarter of our panel members changed their opinion, a fact that could easily be masked by the three percent overall decrease in “favorable” opinions we found over the same time period. From the second week of November to second week of December, the rate of change has declined with roughly one sixth changing their opinion. This suggests that opinions may be stabilizing.

While overall changes in public opinion from a baseline survey in September through four surveys in November may be expected given the launch of the exchanges in October and the significant amount of news coverage the law received at that time, the high rate of change continuing from November to December is unexpected. Whether this level of churn in public opinion continues will be one of several pieces of data to watch in the coming weeks.

Check back with us often, as we continue to take the pulse of the nation. And visit our website to learn more about the study methodology and view graphs of the changes we are observing. Soon, we'll look at differences in opinion of the ACA by political affiliation, gender, employment, and income, and identify what types of people and circumstances are most associated with changing opinion.