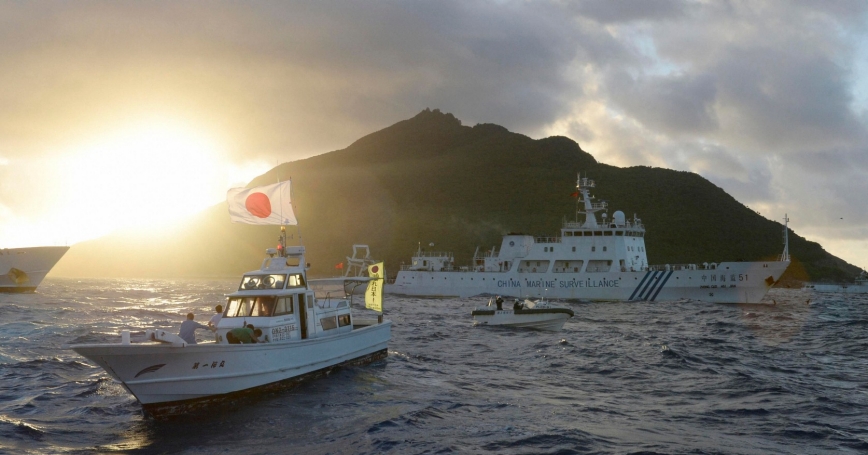 Chinese marine surveillance ship sails near Japan Coast Guard vessels and a Japanese fishing boat in front of one of the disputed islands, called Senkaku in Japan and Diaoyu in China

China tried its hand at coercive diplomacy recently when it announced the establishment of an “air defense identification zone” around the disputed Senkaku Islands in the East China Sea. The dispute, along with a similar case over the Spratly Islands in the South China Sea, is a good case that illustrates how to think about U.S. national security interests. It shows both the bad and, ultimately, the good reasons for U.S. engagement abroad.

The United States has no intrinsic interest in who owns a few islands half a world away. Some things — many things — simply do not matter to the United States; on first glance, it seems that the territorial disputes over a few islands are among them. Learning how to stay uninvolved is an important virtue of international diplomacy. Two cheers for the old British strategy of “masterly inactivity.”

But, some might argue, shouldn't the United States get involved to “demonstrate resolve” or “reassure allies” or “protect credibility” or “show leadership?” No, for two reasons. First, resolve, reputation, credibility, and leadership are not ends in themselves. They are tools to employ when some concrete thing is at stake. Organizing foreign policy around U.S. leadership puts the cart before the horse: The United States cultivates leadership to protect its interests, not the other way around. If the islands are irrelevant to U.S. interests it doesn't show very wise leadership to spend time and resources worrying about them. The only reputation this would cultivate is that of a meddlesome bully.

Second, these concerns turn international politics into an elaborate game of psychology. In this view, the U.S. position abroad is perennially under threat from others' opinions. Every move, every policy should be calculated with reference to its impact on perception. Policy isn't so much about accomplishing actual things as manipulating world opinion. America's preeminent interest is, apparently, that the world believes the United States is strong, resolute, indispensable, or some such thing.

That emperor, I have come to believe, is naked. Making world opinion the centerpiece of U.S. grand strategy strains credulity. Perceptions are important, but not more important than the alliances, trade relationships, and deployments of U.S. forces abroad that give the United States the power to objectively change reality. And the “perceptions first” school of thought exaggerates the ability to manipulate others' beliefs. Perceptions are fickle, unpredictable things, and the United States does not have a reliable science of perceptions-management.

If that were the end of the story, the United States should stay neutral towards the disputed islands. Sadly, that is not the case. There are real things at stake in the disputes over the Spratlys and the Senkaku: not the physical territory, which is negligible, nor the perceptions and opinions about U.S. resolve that might be formed by U.S. policy or non-policy towards them, but the balance of power in East Asia.

The inexorable rise of China is the largest shift in the distribution of world power since the fall of the Soviet Union. According to the Correlates of War (COW) National Military Capabilities composite index, China is already more powerful than the United States and has been for some time (the index heavily weights China's large urban population and industrial base that could be harnessed in wartime).

That does not make China an enemy of the United States, but it does make China a competitor, rival, and potential threat. (No, the rise of India is not the same, for the same reason that Europe and Japan are not threats: because they coexist happily with the United States within the zone of the democratic peace.) That means China's efforts to expand its power anywhere in the world, especially by illegitimate means, are of interest to the United States.

These considerations elevate the otherwise unimportant disputes over a few minor islands on the other side of the world into a matter of great power diplomacy. Again, the United States doesn't care about the islands, but it should care about how China throws its weight around, how it relates to its neighbors, and what it thinks it can get away with.

So when China unilaterally attempts to impose an air defense identification zone over a disputed area, the United States should understand that China is attempting to rewrite the rules of international diplomacy in its favor. That really is a threat to the United States and the global order it has underwritten since the second world war.

There is still an argument for passivity: The United States is so powerful it can afford to float above China's relatively small efforts to challenge the status quo. That is often a defensible response to rogue states or other minor discontented actors who enjoy symbolic gestures of opposition to the United States (such as Cuba or Venezuela).

The disputed islands thus provide an excellent opportunity for the United States to force the issue with China now, on its own terms. Such a confrontation need not be belligerent or mean-spirited, but it should be firm. The goal is not to start a war as an excuse to humiliate the People's Republic, but to counter China's coercive diplomacy and forcibly socialize China into responsible great power behavior.

The Obama administration's decision to fly B-52s through the air defense identification zone in defiance of China's announcement is a good start, as is its public criticism and efforts to rally a regional response. These may be insufficient in the absence of a broader regional strategy to engage, balance, and, if necessary, contain China (the last if relations sharply deteriorate or China becomes markedly more aggressive).

The administration has been forced into action by China's misstep, but a more proactive approach to the region would assure greater long-term stability in the relationship.

Paul Miller is a political scientist at the nonprofit, nonpartisan RAND Corp. A former CIA analyst, he served from 2007 to 2009 as director for Afghanistan and Pakistan on the White House's National Security Council.

This commentary originally appeared on ForeignPolicy.com on December 26, 2013.