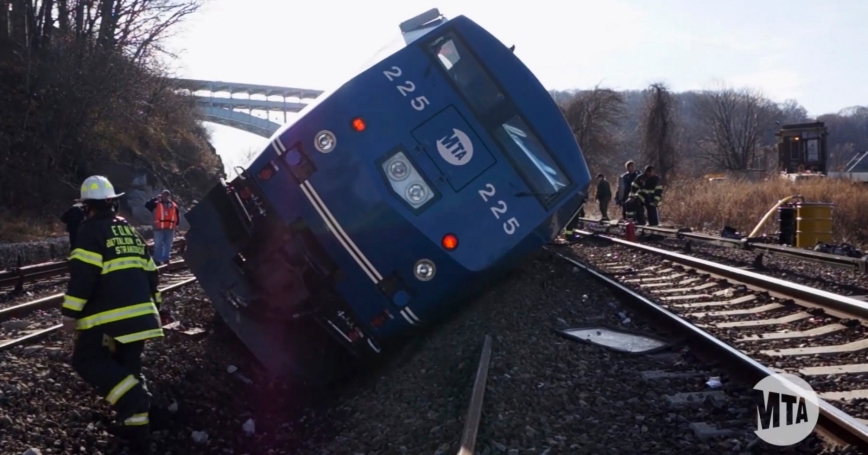 The recent derailment of a Manhattan-bound passenger train that killed four people and injured more than 70 appears to have been caused by fatigue. The engineer has said he slipped into “a daze” and neglected to apply the brakes as the train approached a curve at deadly speed.

To sleep researchers, this sounds like an episode of “microsleep,” commonly referred to as “highway hypnosis.” The tragedy underscores a decades-old debate about sleep: how much is enough and whether shift regulations for transit and other similar workers should be updated. Getting adequate sleep may be seen as a luxury, given our hectic lifestyles, but it's actually a critical safety issue. Though highway hypnosis may enter the public discourse most often when it's cited as the possible cause of a disaster like the Metro-North train wreck, it is responsible for fatal accidents on American highways every day.

Microsleeps are brief, unintended episodes of loss of attention and lack of responsiveness to the environment, lasting as little as a few seconds or as long as a few minutes. They occur most often when fatigued people fight to stay awake during the performance of monotonous tasks like driving a car, watching a computer screen or, terrifyingly, monitoring air traffic. Those who have accumulated “sleep debt” — whether because they haven't slept enough or they've slept poorly — are at heightened risk. Sleep disorders such as insomnia or sleep apnea are frequent contributing factors.

Microsleep episodes are particularly dangerous in situations requiring the ability to respond to crucial stimuli, such as the upcoming curve in the tracks in the case of the derailment. They have been contributing factors behind numerous major disasters involving human error: the Chernobyl nuclear disaster in Ukraine, the Exxon Valdez oil spill off the coast of Alaska and Pennsylvania's Three Mile Island nuclear accident are some well-known examples.

While most of us don't pilot massive vehicles with the lives of hundred of passengers on the line, the effects of fatigue can still have deadly implications. In the United States, driver sleepiness is responsible for about 40,000 injuries and more than 1,500 deaths each year, according to the National Highway Traffic Safety Administration. These numbers are likely underestimates, considering that many drivers are unaware of microsleeps, and may not attribute accidents to these temporary lapses. Young drivers, particularly adolescents, are at high risk for drowsy driving due to insufficient sleep, attributable to internal biological clocks that favor later bedtimes combined with early high school start times.

For individuals, the best ways to avoid drowsy-driving accidents are obvious: Get proper rest and slow down. In an increasingly 24-7 world, the combination of haste and fatigue has become a way of life. This is especially true at the holidays, when more people are traveling, in a rush and sacrificing sleep in the name of seasonal productivity. Anachronistic though it may be, given our cultural need for speed, we have to slow down, be present in the moment, and stop sacrificing sleep.

Policy-makers have a role, too. They should re-examine several issues, including the accessibility of a range of treatments for those with sleep disorders; the availability of measures to counter fatigue in high-risk populations, such as transit workers, members of the military, air traffic controllers, workers at nuclear plants and hospitals; and the possibility of shifting high school start times to more closely align with adolescents' internal biological clocks. And given reports that the engineer in the Metro-North derailment had shifted schedules two weeks before the accident, it's worth exploring the regulation of shift-work schedules and implementing mandatory rest periods.

Whether someone is piloting a locomotive loaded with passengers or a minivan loaded with kids, getting enough sleep and controlling the urge to rush are critical components of safe travel. These are some of the lessons Americans can find in the train wreckage alongside the tracks in the Bronx.

Wendy Troxel is a clinical psychologist and behavioral scientist at the nonprofit, nonpartisan RAND Corp., and an adjunct assistant professor at the University of Pittsburgh's departments of psychiatry and psychology.

This commentary originally appeared on Newsday on December 11, 2013. Commentary gives RAND researchers a platform to convey insights based on their professional expertise and often on their peer-reviewed research and analysis.