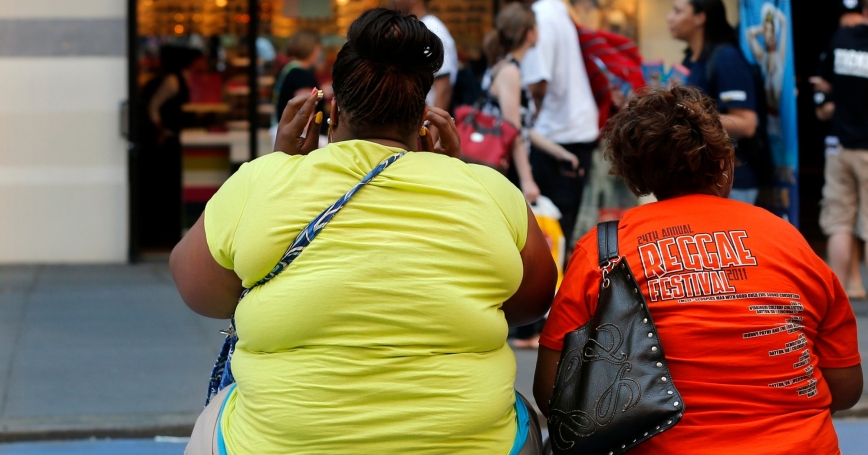 The obesity epidemic is among the most critical health issues facing the United States. Although it has generated a lot of attention and calls for solutions, it also has served up a super-sized portion of myths and misunderstandings.

1. If you're obese, you can blame your genes.

As obesity rates have soared, some researchers have focused on individuals' genetic predisposition for gaining weight. Yet, between 1980 and 2000, the number of Americans who are obese has doubled — too quickly for genetic factors to be responsible.

So why do we eat more than we need? The simple answer: Because we can. At home and at restaurants, a dollar puts more calories on our plates than ever before. Before World War II, the average family spent as much as 25 percent of its total income on food — in 2011, it was 9.8 percent. And people eat out now more than in the past. In 1966, the average family spent 31 percent of its food budget dining away from home — in 2011, it was 49 percent. Because restaurant meals usually have more calories than what we prepare at home, people who eat out more frequently have higher rates of obesity than those who eat out less. Meanwhile, the food industry has developed tens of thousands of products with more calories per bite, as well as new, effective marketing strategies to encourage us to buy and consume more than necessary. We should blame these business practices, which are modifiable, for obesity rather than our genes, which are not.

2. If you're obese, you lack self-control.

According to a 2006 study, “research on restrained eating has proven that in most circumstances dieting is not a feasible strategy.” In other words: People won't lose weight by trying to eating less because they can't easily control themselves. Unfortunately, this puritanical view of personal resolve plays down how our surroundings and mental state determine what we eat.

Research shows (PDF) that if we are overwhelmed with too much information or preoccupied, we have a tendency to surrender to poor dietary choices. In one study (PDF), for example, people asked to choose a snack after memorizing a seven-digit number were 50 percent more likely to choose chocolate cake over fruit salad than those who had to memorize a two-digit number. When adults in another study were asked to sample a variety of foods after watching a television show with junk-food commercials, they ate more and spent a longer time eating than a similar group watching the same show without the junk-food ads. In the same study, children ate more goldfish crackers when watching junk-food commercials than those who saw non-food commercials.

Our world has become so rich in temptation that we can be led to consume too much in ways we can't understand. Even the most vigilant may not be up to the task of controlling their impulses.

3. Lack of access to fresh fruits and vegetables is responsible for the obesity epidemic.

The Obama administration's Healthy Food Financing Initiative is meant to help low-income communities that lack access to fresh food. Although the U.S Department of Agriculture estimates that fewer than 5 percent of Americans live in these “food deserts,” about 65 percent of the nation's population is overweight or obese. For most of us, obesity is not related to access to more nutritious foods, but rather to the choices we make in convenience stores and supermarkets where junk-food marketing dominates. Since we are buying more calories than we need, eating healthfully could be made more affordable by eliminating unnecessary cheaper low nutrient foods and substituting higher quality foods that may be slightly more expensive.

Obesity is usually the consequence of eating too much junk food and consuming portions that are too large. People may head to the produce section of their grocery store with the best intentions, only to be confronted by candy at the cash register and chips and soda at the end of aisles. Approximately 30 percent of all supermarket sales are from such end-of-aisle locations. Food retailers' impulse-marketing strategies contribute significantly to obesity across the population, not just for those who do not live near a green grocer or can't afford sometimes pricier healthful choices.

4. The problem is not that we eat too much, but that we are too sedentary.

First lady Michelle Obama's “Let's Move” campaign is based on the idea that if kids exercised more, childhood obesity rates would decline. But according to the Centers for Disease Control and Prevention, there was no significant decrease in physical activity levels as obesity rates climbed in the 1980s and 1990s. In fact, although a drop in work-related physical activity may account for up to 100 fewer calories burned, leisure physical activity appears to have increased, and Americans keep tipping the scales.

There is compelling evidence that the increase in calories consumed explains the rise in obesity. The National Health and Nutrition Examination found that people consume, on average, more than 500 more calories per day now than they did in the late 1970s, before obesity rates accelerated.That's like having a Christmas dinner twice a week or more. It wouldn't be a problem if we stuffed ourselves only once a year, but all-you-can-eat feasts are now available all the time. It's nearly impossible for most of us to exercise enough to burn off these excess calories.

5. We can conquer obesity through better education about diet and nutrition.

According to a physicians' health study, 44 percent of male doctors are overweight. A study by the University of Maryland School of Nursing found that 55 percent of nurses surveyed were overweight or obese. If people who provide health care cannot control their weight, why would nutrition education alone make a difference for others?

Even with more information about food, extra-large portions and sophisticated marketing messages undermine our ability to limit how much we consume. Consider Americans' alcohol consumption: Only licensed establishments can sell spirits to people older than 21, and no alcohol can be sold in vending machines. Yet there are very few standards or regulations to protect Americans from overeating.

In the 19th century, when there were no controls on the quality of drinking water, infectious disease was a major cause of death. Once standards were established, the number of these fatalities plummeted. Similarly, if Americans did not live in a world filled with buffets, cheap fast food, soft drinks with corn syrup, and too many foods with excess fat, salt and sugar, the incidence of obesity, heart disease, high blood pressure and diabetes probably would plummet. Education can help, but what's really needed is regulation — for example, limits on marketing that caters to our addiction to sugar and fat.

Deborah Cohen is a senior natural scientist at the RAND Corp. and the author of the forthcoming book “A Big Fat Crisis: The Hidden Forces Behind the Obesity Epidemic and How We Can End It.”

This commentary originally appeared in The Washington Post on December 27, 2013. Commentary gives RAND researchers a platform to convey insights based on their professional expertise and often on their peer-reviewed research and analysis.