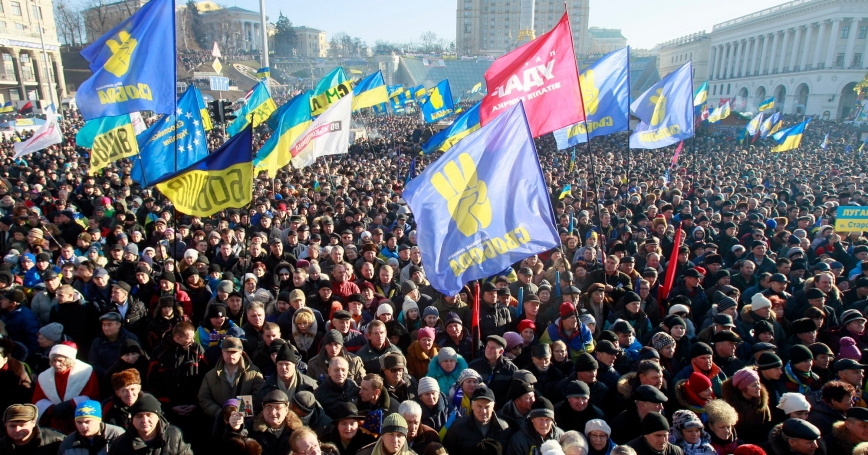 With tens of thousands defiant protestors marching in the streets of Kiev, the crisis in Ukraine continues to evolve with no clear resolution in sight. At stake are Ukraine's future political orientation and the balance of power in Central Europe.

Russian President Vladimir Putin is playing high stakes power politics in a bid to boost Moscow's influence over Ukraine and block Kiev's attempt to strengthen its ties to Europe. Putin sought to pressure Kiev to renounce a new trade and economic agreement with the EU. The agreement was to have been signed at the EU Council's summit in Vilnius at the end of November, but, facing pressure from Russia, Ukrainian President Viktor Yanukovych refused to sign the accord.

Putin's strong-arm tactics are a reminder that when it comes to the former Soviet space geopolitics is far from dead. Yanukovych has tried to play Russia and the EU off against one another. But without a strong tie to the West, he lacks the leverage needed to successfully play that game. The Ukrainian economy is in desperate straits. It is heavily dependent on Russian oil and gas and faces a balance of payment crisis, which could cause it to default on its debts.

The problems Kiev faces are fixable, but not without substantial outside assistance. To obtain an International Monetary Fund loan, for example, Yanukovych would have to agree to introduce major reforms involving sharp cuts in state subsidies and social services as well as a devaluation of Ukraine's currency. Such reforms would be economically painful and politically unpopular. With a presidential election looming in February 2015 and his approval rate low, Yanukovych faces a difficult choice: either introduce economic and political reforms that could cost him the election or try to make a deal with Moscow.

Putin has played his cards skillfully. Having made clear that signing the trade deal with the EU would have serious consequences for Ukraine's relations with Russia, Putin then played the role of the magnanimous friend and helpful ally. During Yanukovych's visit to Moscow on Dec. 17, Putin offered Ukraine a $15 billion financial assistance package and a sharp reduction in the cost of natural gas.

The key question is what did Yanukovych offer in return? This is not clear. According to Putin, the controversial issue of Ukrainian participation in the Russia-dominated Customs Union — was not discussed. That discussion has been put off for a quieter moment. The bill will come later.

Yanukovych will now have to defend the deal to his countrymen. This will not be easy. Yanukovych's party is deeply divided. The oligarchs, whose influence in the party is strong, see their long-term economic interests tied to Europe and don't want Ukraine's economy to be merely an appendage of the Russian economy. If Yanukovych agrees to join Putin's Customs Union along with Kazakhstan, Belarus, and Armenia, he could face strong opposition not only from pro-European parts of the Ukrainian population but also from the oligarchs in his own party, whose support he desperately needs.

Given all of the other pressing problems, both domestic and foreign, facing the United States at the moment, U.S. policymakers may be tempted to write off Ukraine and turn their attention elsewhere. This would be a strategic mistake.

The United States and the EU have a strong stake in keeping open a European option for Ukraine. A reorientation of Ukrainian policy back toward Russia would shift the strategic balance in Europe and have a negative impact on the prospects for democratic change on Europe's eastern periphery. This could threaten the pro-Western course being charted by neighbors Georgia and Moldova. It would also have a dampening impact on the long-term prospects for reform in Belarus by creating an eastern Slavic bloc of nations that lacks ties to the West.

Ukraine is in the midst of an identity crisis that will have a profound effect on its political future. The struggle is between an eastern orientation, favored by the heavily Russianized elites in Eastern Ukraine; and a western orientation, favored by the elites in Central and Western Ukraine, who back the protestors in the streets of Kiev opposing Yanukovych's policy.

This identity crisis is likely to take time to sort out — at least a decade, perhaps longer. As Ukraine struggles to define its future political orientation, the door to warmer ties with Europe should be kept open. The United States and Europe need to take the long view and craft a policy that focuses on strengthening Ukraine's democratic institutions, increasing business and student exchanges and promoting the growth of civil society, especially an independent media. These goals would increase Ukraine's ability to meet the requirements for closer integration into Europe.

The United States and the EU should carefully coordinate their respective policies to ensure they speak with one voice. But the heavy diplomatic lifting should be done by the EU in order to avoid turning the issue into a bilateral U.S.-Russian confrontation, which would raise the political stakes and make the crisis more difficult to resolve.

F. Stephen Larrabee holds the Distinguished Chair in European Security at the nonprofit, nonpartisan RAND Corporation, and served on the National Security Council staff in the Carter Administration.

This commentary originally appeared on The RAND Blog and GlobalSecurity.org on December 24, 2013. Commentary gives RAND researchers a platform to convey insights based on their professional expertise and often on their peer-reviewed research and analysis.