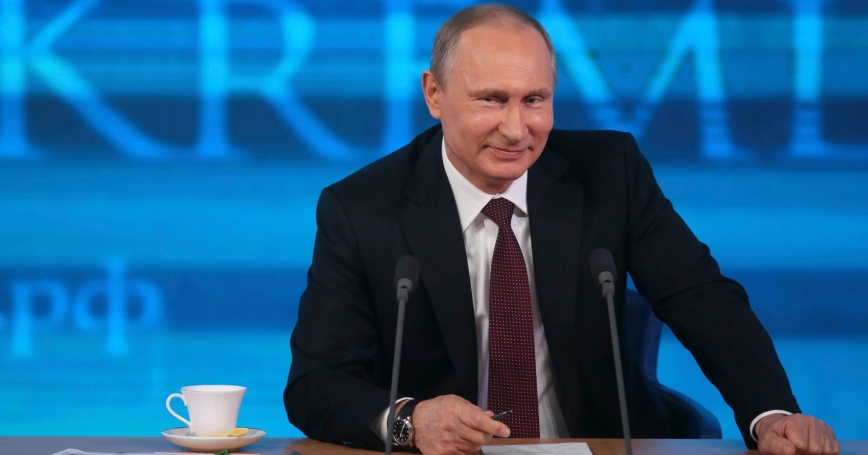 There's an old Soviet-era joke about Vladimir Lenin, a play on all the stories of the kind, grandfatherly figure schoolchildren in the USSR heard endlessly. It goes like this: Lenin is shaving, when a small child approaches him. “Grandfather Lenin,” the child begins eagerly. “Buzz off!” replies the father of the Russian revolution. Like most jokes, this one ends with a punchline: What a kind man: after all, he could have cut the kid's throat.

This joke comes to mind as Russia's current president, Vladimir Putin, has pushed through his parliament a new amnesty law that frees, among others, the two members of performance art collective Pussy Riot, in prison since spring of 2012; the Greenpeace activists held since September of this year; and various others arrested on charges of hooliganism and participating in mass protests. In addition, Putin has allowed oil tycoon Mikhail Khodorkovsky, imprisoned for a decade, to walk free. Knodorkovsky is now safely in Germany.

Putin has come under fierce criticism from both Western governments and others for his crackdown on dissent since returning to power in 2012. The imprisonments of political protesters of various stripe have been part of that initiative, which seemed to burgeon after a string of demonstrations in winter of 2011–2012 expressed public frustration with, among other things, the inevitability of Putin's return to power. But stifling of dissent is not new in Russia, even modern-day Russia.

Throughout Putin's tenure, both as President and Prime Minister, the country has without question become a more dangerous place to disagree with the government. Certainly the Khodorkovsky case speaks to that. Russia's amnesty law comes on the heels of a decision to close one of Russia's more respected news agencies, RIA-Novosti, replacing it with a presumably less independent information agency called Russia Today. Also in recent news was a court ruling that would force the anti-totalitarian and anti-discrimination group Memorial to register as a foreign agent. And, lest we forget, Russia's new law that prohibits homosexual “propaganda” to minors (easily defined as prohibiting the act of living while openly gay), remains firmly on the books and defended by the country's leadership.

Few, if any, think that the amnesties just announced are a sea change in Russian domestic policy. Some speculate that they are an effort to dampen criticism of Russian human rights abuses, especially the anti-gay law, as Russia gears up for the Sochi Olympics this February. That may be the case. But they likely have other purposes, as well. Russians may not be out in the streets as they were two winters ago, but they remain frustrated.

Putin's popularity ratings have, according to Levada Center polling, been dropping slowly but remained over 60 percent as of November. Overall government approval ratings, however, fell to 39 percent that month. For Putin, the crackdowns are one aspect of his strategy for remaining in power. Actions like the anti-gay law, which play to more conservative elements of society, are also part of this strategy, as is a certain tendency to play to nationalist and xenophobic sympathies among the populace. It may make sense to look at amnesty laws in this light as well. Like Lenin in the old joke, Vladimir Putin is reminding Russians that he can be merciful — or not.

This commentary originally appeared on The RAND Blog and GlobalSecurity.org on December 23, 2013. Commentary gives RAND researchers a platform to convey insights based on their professional expertise and often on their peer-reviewed research and analysis.