The Central African Republic Must Save Itself 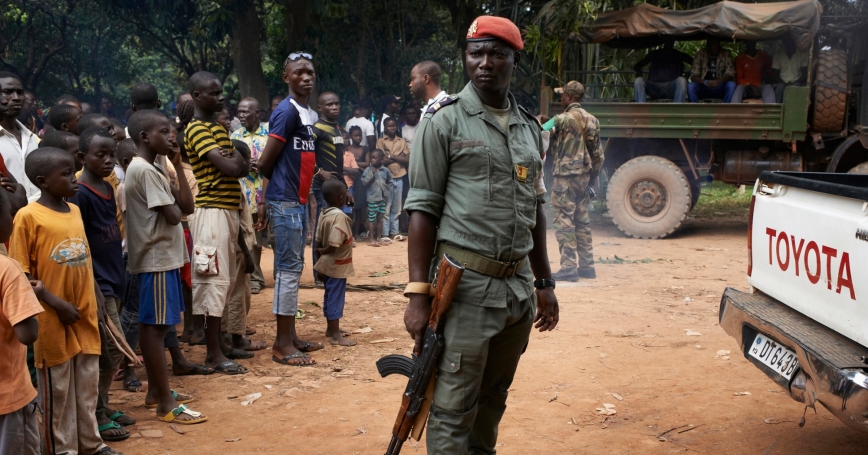 Soldiers of the Multinational Force of Central Africa watch over a crowd during a religious reconciliation tour in the outskirts of Bangui, December 11, 2013

The coincidence of the passing of Nelson Mandela last week with France's decision to intervene in the Central African Republic highlights a number of inconvenient truths about Africa and the role of the international community in its affairs.

First, with good leaders — of which Mandela was a paragon — all too rare, many African countries have suffered under rulers who have been little more than looters intent on enriching themselves along with their immediate families and tribes at the expense of everyone else. Much of the Central African Republic's present agony can be explained by the fact that the best of its rulers have been no better than the continent's dismal mean, including former President François Bozizé, whose ouster last year set the immediate stage for the current crisis.

The Central African Republic, unfortunately, also holds the distinction of having been ruled by one of Africa's very worst: the self-proclaimed “emperor” Jean-Bédel Bokassa, a megalomaniacal tyrant who allegedly and quite plausibly ate people, in addition to ruining the country and stealing vast sums of money.

Second, French President François Hollande's intervention — in the second African nation he has sought to rescue this year — makes him a key player in African affairs. As praiseworthy as Hollande's actions may be, one cannot help but be saddened by the fact that, almost 60 years after most African states became independent, it still falls upon outsiders and former colonizers to deal with many of the continent's catastrophes. The recent spectacle of thousands of desperate Central Africans seeking safety around the perimeter of the French base at the international airport in their nation's capitol, Bangui, only underscores the lack of other recourse for a population abandoned by its own leaders.

Third, fixing the Central African Republic — as with fixing Mali and many other African states — requires more than meeting pressing military requirements such as blocking and destroying advancing Islamist militants or securing the capital and other key locations. These countries need reforms that they appear unable to achieve alone, to a large extent because their past or current leaders have proven incapable of doing the right thing for their people.

The Central African Republic, at this point, effectively has no government, but rather is dominated by gangs and criminals intent on extracting whatever they can from the country and its people. Mali at least has a real government, and its new democratically elected leader, Ibrahim Boubacar Keïta, is no criminal. Yet he and his military remain at a loss as to how to interact with the northern half of the country without infuriating it. And he has been unable to successfully co-opt or at least negotiate with a main rebel group that, despite having negligible popular support, has not yet given up control of the northern town of Kidal and relishes its status as a spoiler.

On one level, these countries need help in strengthening their central governments so they can reach out to the most remote parts of their countries while also, perhaps, striking delicate political and security arrangements with local communities. In addition, they need assistance with defense, security and justice institutions; support for effective decentralization; and close oversight over the distribution of aid and other government resources. Both countries also need to go through some sort of reconciliation process and perhaps even transitional justice. The Central African Republic, for example, recently has experienced a sharp degradation in Christian-Muslim relations that cannot easily be patched over.

On another level, in extreme cases like northern Mali or the Central African Republic, where the real problem is less re-establishing order in remote regions than establishing an order that never was, the intervening force cannot help but be more than simply a neutral party concerned solely with security matters narrowly defined. France's recent actions to disarm the mostly Muslim Séléka militia, for example, are not entirely neutral, non-political acts. The French Army in Mali, though it remains focused on fighting Islamist militants, finds itself awkwardly sandwiched between the Malian state and northern rebels. Governing the Central African Republic or northern Mali could not be further from Hollande's mind. Yet limited interventions are more of a theoretical option than a practical one.

What this suggests is that the scale of assistance required might be greater than what France and the international community are ready to provide, although a greater effort now might speed up the length of time the Central African Republic will require to get back on its feet and for the intervention to end. In a situation where the risks of quagmire are high and prospects for a positive outcome are dim, France can only be commended for stepping in nonetheless to assist the men, women and children caught in the crossfire. Finding a way to step out without putting them back into harm's way will be the most arduous challenge France will face.

But outsiders can or will only do so much. The real salvation for African states in crisis lies with the emergence of competent, trust-worthy and wise leadership. The emergence of such leaders could worthily honor the legacy of Nelson Mandela. Until then, in the Central African Republic at least, it is on France.

This commentary originally appeared on U.S. News & World Report on December 12, 2013. Commentary gives RAND researchers a platform to convey insights based on their professional expertise and often on their peer-reviewed research and analysis.