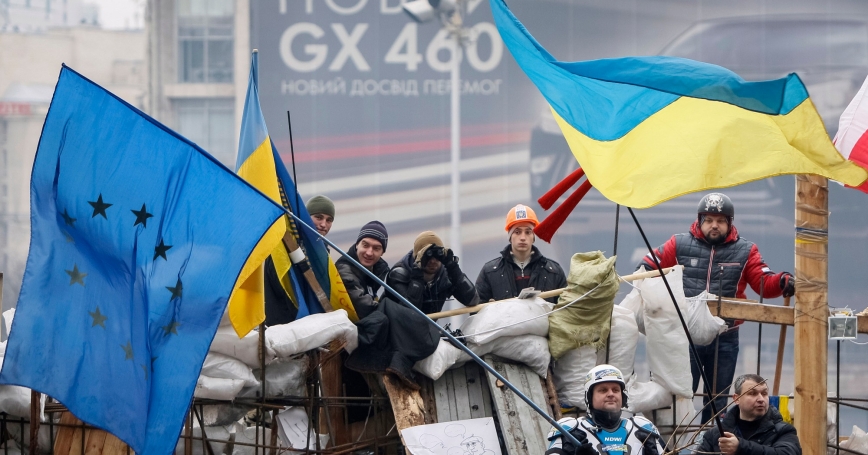 The scenes from Ukraine are inspiring. Hundreds of thousands of people have gone to Kiev's central square in recent weeks to protest their government's failure to sign an association agreement with the European Union and, more recently, to demand the government's ouster — calls that will only increase in volume now that President Viktor Yanukovych has instead agreed to a bailout deal with Russia. With images strikingly reminiscent of the 2004 Orange Revolution, when protests in the same square reversed a fraudulent election, Ukrainian teachers, businesspeople and veterans have faced down riot police in the bitter cold. Hailed in person by bundled-up Western leaders and officials, including U.S. Sens. John McCain of Arizona and Chris Murphy of Connecticut, the protesters have become a symbol for Ukraine's Western and European identity.

To supporters, the EU association agreement is crucial to cementing Ukraine's status as part of modern Europe, with all that entails. Although the agreement makes no promises of EU membership and demands substantial and painful reforms, many Ukrainians believe that failure to sign dooms their country to ever-closer ties with Russia, something the new deal with Moscow would seem to underline. This they see as a return, if not to the Soviet Union, then to endless subservience to Russian political and economic bullying. Indeed, some suspect that it was Russian pressure to instead sign a Customs Union with Moscow that led Yanukovych's government to back away from the EU agreement on Nov. 21. Moscow and its state-sanctioned media did little to quell such speculation: they insist the protests are Western-backed and predict that EU association will lead to poverty, corrupt morals and other ills (related propaganda seeks to terrify Ukrainians with the specter of gay marriage).

But while some see Ukraine choosing between European-style democracy and economic, political, and cultural backwardness in Russia's shadow, the fact is that Ukraine faces a difficult and murky path in any direction. The country is in dire financial straits, needing billions in loans to avoid bankruptcy. The Russian deal's loans and discounted gas could avert crisis in the near term, but will do nothing to support the reforms needed for economic sustainability in the long term. Conversely, the tough conditions EU association would impose would make it difficult for any Ukrainian government to stay in power long enough to effect positive results.

Among the reasons Ukraine's economy is in such bad shape is that it's a tough place to do business. Ukraine came in 144th out of 177 countries in Transparency International's 2013 Corruption Perceptions Index. Here again, for leaders to make a difference, they need to stand up to the very political and business elites to which so many of them are beholden. And while Ukraine's political scene is thriving, it is also tremendously unstable. The candidate whose fraudulent victory was overturned by the Orange Revolution in 2004 is the same Viktor Yanukovych who now serves as president. The woman he narrowly beat for that post in 2010, Yulia Tymoshenko, was jailed for corruption-related offenses in 2011 (Ms. Tymoshenko's release was among the EU's conditions for the association agreement).

Ukraine's polity is so fiercely contested because the country is deeply divided. Yanukovych represents the more conservative Russia-leaning east of the country. Tymoshenko and boxing champion Vitali Klitschko are the faces of the EU-focused west. They are joined in Ukraine's political space by a mélange of ultranationalists, communists and others. Recent opinion polling suggests that roughly half of Ukrainians support EU association and the protests. Support runs high in the west and center, much lower in the east. Yanukovych's decision to cut a deal with Russia, whatever its other effects, will make it very difficult for him to hold on to power going forward.

The good news is that Ukraine's divided polity, politically active population and free press mean that nothing is etched in stone. The deal with Russia could well be reversed or derailed. We do not know what Russia has asked in return for loans and discounted gas, but past experience suggests that whatever it is, Ukraine will likely soon balk at fulfilling the terms. Russia, meanwhile, will eventually want to raise gas prices and may or may not disburse the promised funds. Meanwhile, the door to EU association is not yet closed for Ukraine.

But this episode, and the protests themselves, point to a deeper issue which will determine Ukraine's future. If Ukraine truly aspires to become a democracy where the ballot box is more important than the street, it has a lot of work to do, work that goes beyond any agreement with any partner. Ukrainian officials have already made many promises to their people and to foreign friends, it is keeping those promises that has proven the challenge. The fact is that Ukraine has to date not had elected leaders who can stand up to corruption, Russian pressure or domestic discontent in the face of economic hardship. True progress needs leadership that not only can turn Ukraine from fraud to transparency, but that reconciles the needs and wants of Ukraine's east with those of its west and finds ways to work with Russia without kowtowing to it. Western support can help, but neither it nor Russian loans solve the underlying problems. And while reform will serve Ukraine well and failure to reform will serve it poorly, we must not fool ourselves into thinking that the choices and options are simple. Ukraine's history underscores the challenges of finding an effective path through a situation so fraught. I suspect that this is not the last of the stumbling blocks.

This commentary originally appeared on U.S. News & World Report on December 18, 2013. Commentary gives RAND researchers a platform to convey insights based on their professional expertise and often on their peer-reviewed research and analysis.