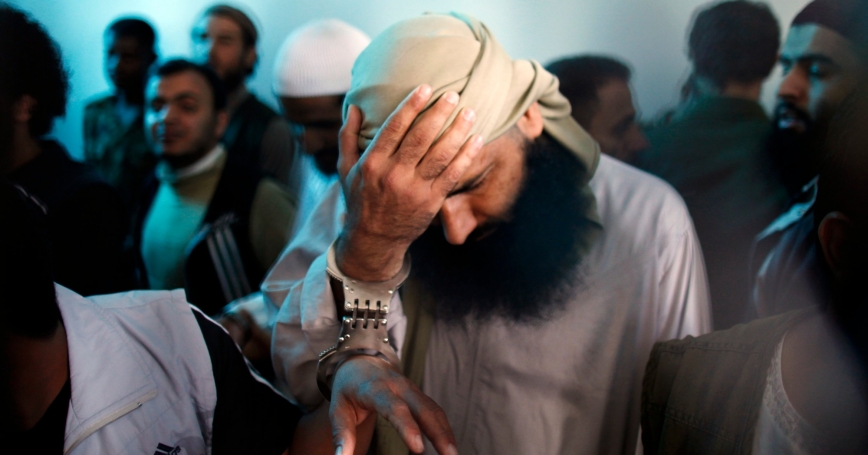 A suspected al Qaeda militant holds his head as he stands with co-defendants behind bars at the state security court of appeals in Sanaa, March 2013

Recent comments by key U.S. lawmakers have again raised the issue of where the United States is in its campaign against al Qaeda. This has left some to wonder if the terrorism threat against the United States is increasing and if Americans are not as safe as they were a year or two ago. We asked three senior RAND analysts, who have been tracking progress against al Qaeda for years, to offer their take.

With its central leadership decimated, how much of a threat to the United States is al Qaeda today?

Andrew Liepman: The United States has largely dismantled the organization that attacked America on 9/11. It is hard to imagine that group — or any other, for that matter — launching that type of spectacular attack again. Al Qaeda's leadership is decimated, its fundraising constricted, recruitment and mobility and training — all things that are needed to plan and launch terrorism attacks — are much diminished. Unfortunately, that's not the end of the story — the organization bin Laden formed is largely gone, but the movement he spawned is anything but defeated. New affiliates have sprung up across the region and continue to murder in al Qaeda's name.

Seth Jones: While it is impossible to predict the future with certainty, at least three sets of factors suggest that al Qaeda and a range of Salafi-jihadist groups could remain a serious threat to the United States — both at home and overseas. First, the Arab uprisings have weakened some regimes across North Africa and the Middle East, creating an opportunity for al Qaeda and other terrorist groups to secure a foothold. Second, a growing sectarian struggle across the Middle East between Sunni and Shi'a actors — and their state backers — could increase the resources available to Sunni militant groups, including al Qaeda. Third, a U.S. military withdrawal could decrease U.S. influence and accelerate the prospects of instability, allowing al Qaeda to regain a foothold. Afghanistan offers a useful example, though U.S. forces have also exited Iraq.

Brian Michael Jenkins: I agree with Andy. Al Qaeda's operational capabilities have been degraded, in particular, its ability to launch spectacular strikes in the West. But the debate about whether al Qaeda is on the rocks or on the rebound continues. Comparing pre-9/11 al Qaeda capabilities with those of today suggests a decline. But looking at the current dynamics, as Seth does, would indicate opportunities for an al Qaeda resurgence. Those indications include new footholds in the Sahel, the civil war in Syria, and the American withdrawal from Afghanistan. In a post-9/11 environment, it is dangerous to let history bind threat assessments — 9/11 was unprecedented although perhaps anomalous.

Without bin Laden calling the shots, has its “global jihad” become more localized?

Liepman: Bin Laden insisted, even from his hiding place in Abattabad, that al Qaeda focus on attacking the United States and the West. And even as he was giving orders to do so, the organization he thought he was commanding was changing. Yemenis were more interested in Yemen; Somalis were focused on Somalia, and so on. Despite his urgings, only al Qaeda in the Arabian Peninsula under the control of Anwar Awlaki focused on attacking the far enemy. For the rest, the challenges of holding and securing territory, raising funds locally, and battling local enemies trumped bin Laden's instructions. So rather than one big organization focused on the West as its primary enemy, al Qaeda has transformed into many organizations, each setting its own priorities and targets.

Jenkins: Al Qaeda remains determined and resilient as it evolves to meet new circumstances. Today's al Qaeda is more decentralized, more dependent on its affiliates and allies, and its ability to inspire homegrown terrorists. That makes its “global jihad” more subject to centrifugal forces — internal disputes and fragmentation.

Liepman: The al Qaeda of today bears almost no similarity to the highly centralized yet highly diverse organization that existed on 9/11. It is an amalgam of five largely separate groups: in North Africa, in Somalia, in Yemen, in Iraq, and in Syria. They are bound together by a similar ideology (but differing in interpretation), and all seek to remove local regimes. They are largely unconnected, albeit mutually supportive.

Has al Qaeda benefitted from the Arab uprisings?

Jenkins: Overall, it probably has benefitted from the turmoil of the Arab uprisings. It has opened new fronts in Africa and the Middle East by insinuating itself into local conflicts, proving its brand still has attraction.

Jones: Syria is in the midst of a tumultuous war that is likely to continue for several years. Al Qaeda's main affiliate is Jahbat al-Nusrah. There is a growing contingent of foreign fighters — perhaps several thousand — traveling to Syria to fight in the war. A substantial number of these fighters are coming from the region. But a growing number appear to come from the West, especially from Belgium, France, and Sweden. An increasing number of Americans — perhaps over four dozen now — have apparently traveled to Syria to support the Syrian opposition. In the future, a continuing trek of foreign fighters to Syria poses a threat to the United States and Europe.

How much of a threat is there that homegrown terrorists will pick up the al Qaeda mantle in the United States?

Jenkins: Determined to continue its terrorist campaign in the United States, al Qaeda has sought to inspire and instruct homegrown terrorists primarily through the Internet. But thus far its sales campaign has produced only meager results. In the 12 years since 9/11, fewer than 200 people have been arrested in the United States for providing material support to jihadist groups or, more seriously, plotting to carry out terrorist attacks. Several dozen Americans have joined jihadist fronts abroad. Most of the homegrown terrorist plots have been amateurish (although occasionally deadly as in the Boston Marathon attack). Of 42 jihadist terrorist plots since 9/11, 38 were uncovered and disrupted by the authorities. Only three attacks resulted in fatalities — 17 people were killed. This contrasts with the 1970s, when terrorist groups in the United States were carrying out an average of 50 to 60 bombings a year — and these were sustained campaigns of terrorism. Why has al Qaeda been unable to establish a foothold in the United States? In part, it's because al Qaeda's message has not gained much traction among America's Muslims. And domestic intelligence, while still far from optimal, has been successful against these not too sophisticated adversaries. But Seth is right in pointing to the growing threat of foreign fighters, including Americans, going to Syria.

How long will the threat posed by the jihadist movement persist?

Liepman: Al Qaeda's militant ideology is resilient and it resonates in places that are poorly governed and prone to instability. The United States can't predict which new group will refocus on attacking the United States or what ungoverned territory will become the next safe haven for training, planning, and launching attacks. It is essential that the United States understand what al Qaeda has become: tactics that worked against bin Laden's core organization may not work against the affiliates.

Jones: In the end, the struggle against the al Qaeda movement will be measured in decades, not months or years. Much like the Cold War, it is also predominantly an ideological struggle. Al Qaeda leader Ayman al-Zawahiri said it best in a 2005 letter to al Qaeda in Iraq leader Abu Mus'ab al-Zarqawi: “I say to you: that we are in a battle, and more than half of this battle is in the battlefield of the media.”

Jenkins: Al Qaeda's primary objective is to keep its global jihad going. In its own words, every new al Qaeda front creates a new generation of jihadists. The president has said that this war, like all others must come to an end, but it is hard to see how or when. Al Qaeda was created 25 years ago. It declared war on the United States 17 years ago. Its leaders vow that this conflict will continue until Judgment Day. The United States must presume that the threat posed by the jihadist movement will persist in some form for decades, possibly generations.

So, the bottom line question: is the United safer now?

Liepman: The U.S. homeland, certainly, is safer. But is it safe enough? The danger this new breed of al Qaeda terrorist to U.S. citizens abroad is real, and the threat to its allies and to innocent civilians in places like Kenya, Nigeria, Somalia, Yemen, Syria, and Pakistan is acute. Bin Laden is gone but his brutal theology lives on.

What should the United States do?

Jones: The first is continuing to implement a light footprint strategy that focuses on covert intelligence, law enforcement, special operations, and diplomatic activity to target al Qaeda and its financial and logistical networks. A light footprint strategy means refraining from large numbers of U.S. conventional forces in Muslim countries. The second step is helping local governments establish basic law and order as a bulwark against al Qaeda and other extremists. In cases where al Qaeda does not pose a significant threat to the homeland — such as North Africa or East Africa — the U.S. government should support local governments and allies as they take the lead. A good example is the French-led operation in Mali in 2013.

The third is aggressively undermining al Qaeda's extremist ideology. In 1999, the State Department disbanded the U.S. Information Agency, which played a prominent role in countering Soviet ideology during the Cold War. Today, no U.S. government agency has the lead role for countering the ideology of al Qaeda and its broader movement. But an effective campaign has to be done carefully, covertly, and led by credible Muslims in these countries.

Jenkins: Whatever the United States does must be sustainable. The United States already has paid a heavy price for our success in protecting the homeland — in blood and treasure abroad, and in more insidious currencies at home where extraordinary security measures have become a permanent part of the landscape.

Liepman: In some sense the United States has been spoiled by its own success. Our security services have preempted and disrupted almost every plot against us — the toll here in the homeland since 9/11 has been astonishingly low compared to what it could have been — indeed, compared to what most observers were sure it would be. But as Brian has aptly pointed out, this success has come at a high price. The conversation about the balance between security and liberty is a healthy one and must continue.

Seth Jones is associate director of the International Security and Defense Policy Center at RAND and former advisor at U.S. Special Operations Command. He is the author of the book “Hunting in the Shadows: The Pursuit of Al Qa'ida Since 9/11.”