EU-Ukraine Alliance Will Benefit Russia, Too 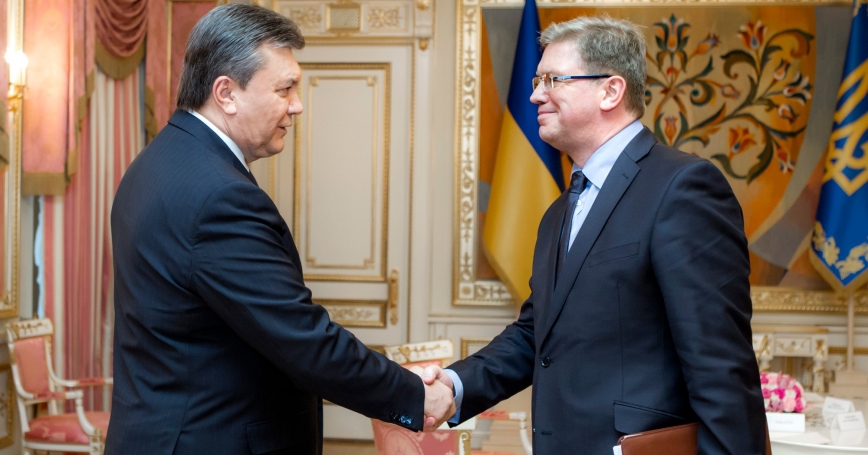 by Oleh Havrylyshyn and Svitlana Kobzar

Ukraine and Russia have a great deal in common, not least of which are their respective struggles with post-communist transition. Soon, they may add another thing to that list: missed opportunities that stem from the spread of anti-Western disinformation concerning the European Union, which is convenient only for certain ruling groups in both Russia and Ukraine.

Despite strong analytical evidence to the contrary, the integration of Ukraine with the EU has been depicted as a zero-sum game and a looming economic disaster for Ukraine and its ties with Russia, while the Customs Union has been portrayed in the opposite light.

This policy is not only restrictive for Ukraine and misleading to its people, it also contributes to the growing unrest and division that is turning increasingly violent.

Much of this disinformation is intended to negatively impact public opinion about the proposed EU-Ukraine Association Agreement. For Russia, this strains an already tense relationship with the EU, as demonstrated by the decision to shorten the EU-Russia summit. For Ukraine, it caused the EU to put Association Agreement discussions on hold and to express its frustration with the gap between Ukraine's words and deeds.

Incidentally, such anti-EU disinformation stands in stark contrast to statements made by the Ukrainian and Russian Foreign Ministries. Foreign Minister Sergei Lavrov, noting that Europe and Russia share 21 million square kilometers and a population of 650 million, recently reiterated the huge potential for Russia's closer relations with the EU. The EU accounts for 41 percent of Russia's external trade, and the annual number of Schengen visas issued in Russia rose from 3.2 million to 6 million from 2009 to 2012. And even despite the recent crisis in EU-Ukraine relations, Ukrainian Foreign Minister Leonid Kozhara continues to insist that Ukraine intends to resume Association Agreement talks.

In fact, the EU-Ukraine Association Agreement would benefit both Ukraine and Russia in many ways, especially in greater trade, social and cultural exchanges. Ukraine's closer association with the EU would actually increase Russian trade with Ukraine as long as Russia does not impose artificial restrictions, as it may have already done in 2013. As an example, Poland's exports to Russia after accession in 2004 not only did not fall. They actually grew from less than $4 billion to more than $10 billion.

To be sure, there must also be a market in Russia for higher-quality products that Ukraine, with its low labor costs, could capture. This was precisely what central European manufacturers did after Association Agreement signatures, leading to much greater gross domestic product growth, something Ukraine is in desperate need of. In 1991, Ukraine and Poland had similar per capita incomes. But in 2012, Ukraine's was about $4,000, and Poland's was triple that at $12,800. Growth in per capita income will increase demand for all imports, another benefit for Russia.

More important, in the past the surge of FDI into potential EU members began well before accession, when the institutional quality of investment climate was still low. Investors were motivated by the likelihood that an Association Agreement would improve this climate — and it did. Similarly, once Ukraine exhibits a commitment to improved institutions, it can expect investment well before the reforms are completed.

While Russia's $15 billion loan may have provided short-term relief by stabilizing central bank reserves in Ukraine, it does not address the fundamental external imbalance in the long run. Allowing a delay in devaluation may be good for the political aims of the government but not for the Ukrainian economy.

Likewise, avoiding the “unreasonable” proposals of the IMF is only a postponement of inevitably needed structural reforms. Russia, as an IMF member, understands this logic very well and often preaches this gospel for other countries at the IMF board of directors. Many Ukrainians also understand this.

For the fledgling Eurasian Union, having a large member such as Ukraine with its weak economy and sharp political divisions would be destabilizing.

Subsidizing Ukraine's “loyalty” will surely prove costly for Russia, whose growth prospects are grim, with forecasts for 2013 downgraded several times to only 1.5 percent. With its high dependency on oil, low labor productivity and many noncompetitive sectors, Russia's economy faces long-term challenges.

The risks are reflected in resurgent capital flight, as net outflows increased 14.8 percent year-on-year to $62.7 billion in 2013. Many experts point to the complex regulations and corruption as factors contributing to its poor investment climate and consequent low FDI.

Thus, many interpretations and assertions about the “ill effects” of a potential EU orientation for Ukraine are myths. Horror stories about the immediate loss of Russian markets are simply wrong. And if declines do materialize, they will likely be because of questionable restrictions on Ukrainian imports by Russia, which probably are not legitimate under World Trade Organization rules. Concerns about a flood of European imports are similarly unfounded.

Many Ukrainian and Russian citizens have been misled by these myths and feel sincerely concerned about the potential economic and social impact of an EU-Ukraine agreement. If these myths are dispelled and a larger share of the population understands the benefits of the Association Agreement, internal support could be overwhelming.

Oleh Havrylyshyn, a former deputy director of the European II Department in the International Monetary Fund responsible for countries of the former Soviet Union and a former official in Ukraine's Finance Ministry, is visiting scholar at the Center for European, Russian and Eurasian Studies at the University of Toronto. Svitlana Kobzar is a policy analyst at RAND Europe and assistant professor at Vesalius College in Brussels.

This commentary originally appeared in The Moscow Times on January 28, 2014. Commentary gives RAND researchers a platform to convey insights based on their professional expertise and often on their peer-reviewed research and analysis.