Gen. Amos Discusses the Future of the USMC at RAND 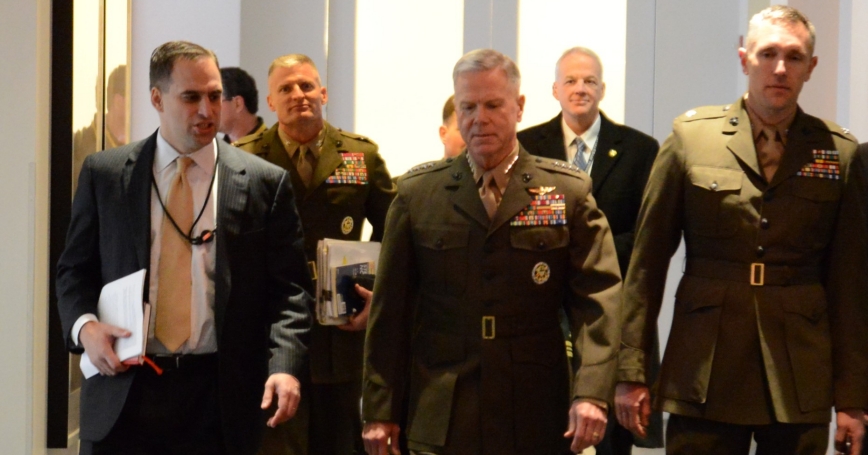 The hard-won lessons of parallel counterinsurgency missions conducted in Afghanistan and Iraq over the last decade will serve the U.S. Marine Corps well as it faces new challenges around the world in the coming years, Marine Corps Commandant James F. Amos told a gathering at RAND's Washington headquarters Tuesday.

Amos, the 35th commandant of the Marine Corps who has announced plans to retire in October, said he expects the Corps' mission after Afghanistan and Iraq to center around shorter-term challenges as they arise, including the provision of humanitarian aid and disaster assistance.

“I don't think in my lifetime it's going to go away,” Amos told a gathering of RAND staff and media. Among the lasting lessons of Iraq and Afghanistan: that counterinsurgency missions are conducted amid “human terrain,” that culture and language count, and that Marines must be prepared to operate in chaotic and diverse environments.

Even as it faces the prospect of severe budget cuts, Amos said the Marine Corps will remain prepared to take on a diversity of missions. The shrinking budget, he said, will mean “a smaller force, but it will be highly capable and it will be ready.” Two programs that have escaped the budget axe, he said, are the F-35 and the Amphibious Combat Vehicle (ACV). Amos said he expects to make a decision soon on the ACV as a replacement for the Marines' aging fleet of amphibious vehicles.

“Many parts of the world remain very dangerous places,” Amos said, adding “there will be no shortage of work for the military or the Marines.”

Amos stressed the importance of having Marines forward deployed, particularly as the military rebalances its mission toward Asia and the Pacific. While he's not ruling out the possibility of another major war, for now Amos said he expects the Marines to be occupied with smaller missions as they arise.

As recent examples, he cited the role of the Marines in the relief mission after super typhoon Haiyan struck the Philippines in November and the evacuation earlier this month of staff members from the U.S. Embassy amid a deteriorating security situation in South Sudan.

“The Marine Corps is America's insurance policy, a hedge against the unknown,” Amos said.