Michelle Obama Shouldn't Be the Only One Fighting Obesity 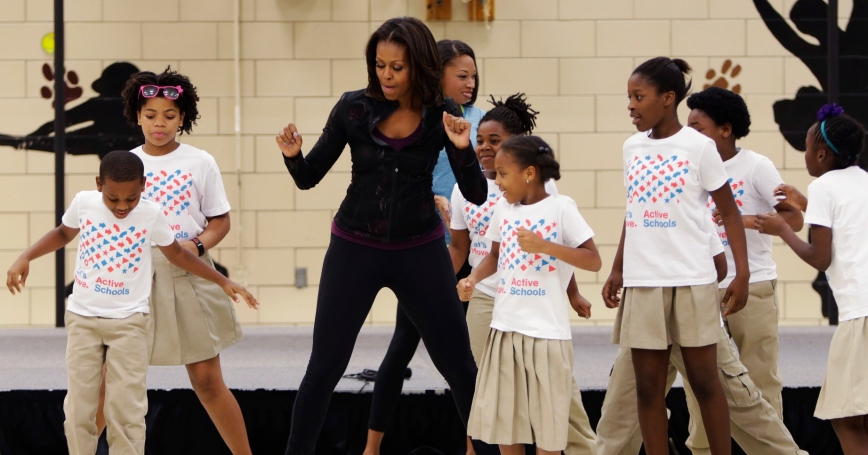 Almost four years ago, Michelle Obama—who turns 50 Friday—launched what would become the signature initiative of her tenure as first lady: Let's Move!, the national campaign to fight childhood obesity.

“The physical and emotional health of an entire generation and the economic health and security of our nation is at stake,” she said in launching the program, which has made strides in educating America about obesity and the risks kids face if they don't eat right and exercise. I applaud the first lady's dedication to the issue and the energy she has brought to the cause, planting a vegetable garden at the White House and visiting schools to encourage good exercise habits. And she has certainly led by example, as her famously toned arms attest. Yet I worry that the Let's Move! campaign, like other public education programs, is not enough to address the real forces behind America's obesity epidemic.

To identify the policies that will make a big fat dent in obesity rates, we first need an accurate diagnosis: Americans are overweight and obese because they are inundated with too much food.

For all the buzz around trendy health foods like quinoa and arugula, most Americans still eat poorly. Americans currently gobble down, on average, over 500 calories more each day than they did 30 years ago when the obesity rate was half what it is today. This is because the United States has been turned into a food swamp teeming with extra-large portions and unhealthy foods. Few restaurants serve meals that meet USDA guidelines and instead serve food and beverages with too many calories and too much salt, fat and sugar that increase the risk of chronic diseases. Nutrition knowledge and a mastery of math might not help. For example, a full order of Chili's Texas Cheese Fries has 1,740 calories, but a half order has 1,260 calories—go figure—and that's just an appetizer. And junk food is available not merely in candy stores, as was the case in the 1950s and 1960s, but in office buildings, hardware stores, bookstores, car washes, gas stations—even in men's clothing and women's lingerie departments. The use of impulse marketing strategies has skyrocketed, with invitations to indulge at every turn. Taco Bell is now promoting a “fourth meal” with the logic that anytime we are out, we must be hungry.

Obesity is not a lighthearted game. It is an underlying cause of heart disease, hypertension, diabetes and cancer. Its costs include the premature deaths of hundreds of thousands every year. Obesity is a primary source of increased health care costs, responsible annually for about $150 billion in extra expenditures. Moreover, obesity makes millions of people miserable, depressed, humiliated and stigmatized. So many people who are desperately trying to control their weight are constantly undermined by the food all around us.

Let's Move! has its critics, but I believe government should have an even broader role. So I say: Let's move on. Let's move beyond education programs to the establishment of policies and regulations that will do more than offer nutrition tips and encourage people to be active. That means targeting the food industry by establishing standards for food service away from home and by regulating impulse marketing.

This is hardly as radical as it might sound. Standards and regulations are critical to public health because they protect people from environmental exposures they cannot control as individuals. For example, standards and regulations are why traffic-related fatalities have declined by 40 percent over the past 50 years. A precipitous decline in car crash deaths began in 1968, not because we educated people to become better drivers and promoted safe driving, but because the country enacted Federal Motor Vehicle Safety Standards.

Similar government standards protect Americans from drinking contaminated water, breathing polluted air, working in unsafe conditions and living in substandard housing. So why not regulate how food is marketed in stores and served in restaurants to protect Americans from obesity and the chronic diseases it can cause?

The challenge is to figure out how to drain the food swamp using standards and regulations that protect Americans, but that do not interfere with individual choice. It is not up to the government to tell Americans what they should or should not eat. However, it is the responsibility of government to shield consumers from manipulative marketing strategies that undermine long-term public health goals.

People do not have full control over their senses, which function independently and automatically to let us know about threats and opportunities around us. The sight of a juicy burger, the smell of freshly baked cookies, the sound of a sizzling grill can get us salivating and reaching for treats before we even realize what's happening. Likewise, when huge portions of food are served in restaurants, people tend to eat it all without a second thought.

Personal responsibility to regulate food intake requires both capacity and insight. Unfortunately, the food industry has discovered clever strategies that influence what and how much people eat in ways they cannot easily recognize or resist. For example, simply putting products in prominent locations, like on end-aisle displays or in front of the cash register, can lead consumers to buy more of those products. Such marketing should be curtailed.

Because most restaurants serve food that will increase our risks for obesity and chronic diseases, we need standards for healthy meals and reasonable portions. Portion sizes should be standardized to meet USDA guidelines so that people can gauge how much they are being served, with single portions available for every item. Nothing would stop people from ordering more than a single portion—standardized portions would make it transparent as to how much food people are getting. And we should pay special attention to what our children eat: All kids' meals should include the essential nutrients that children need—fruits, vegetables and whole grains. Again, that might seem radical, but it is consistent with the recommendation of a panel of 21 experts who examined the issue, and 30,000 restaurants have already adopted similar standards promoted by the National Restaurant Association.

What about all the people who don't care about their health and want unhealthy foods? Sure, let them eat that cake. New food standards and regulations would not be intended to stop people from eating what they want. They would not ban anything, but merely change the calculus of exposure and convenience. The easy choices would be the healthy choices; being unhealthy would just take a little more effort, ensuring the choice is deliberate rather than impulsive.

As Michelle Obama aptly pointed out, the obesity epidemic is about more than personal health; it's also about America's economic health and security. And while the attention brought to the issue by Let's Move! is certainly welcome, standards and regulations present the real solution. We can thank standards and regulations for reductions in workplace injuries, highway fatalities, childhood poisonings, inferior housing and limits on air pollution. It's time to craft and enact reasonable and effective regulations to end the obesity epidemic as well.

Deborah Cohen is a physician and researcher at the RAND Corp. Her new book is A Big Fat Crisis: The Hidden Forces Behind the Obesity Epidemic and How We Can End It.

This commentary originally appeared on politico.com on January 16, 2014.