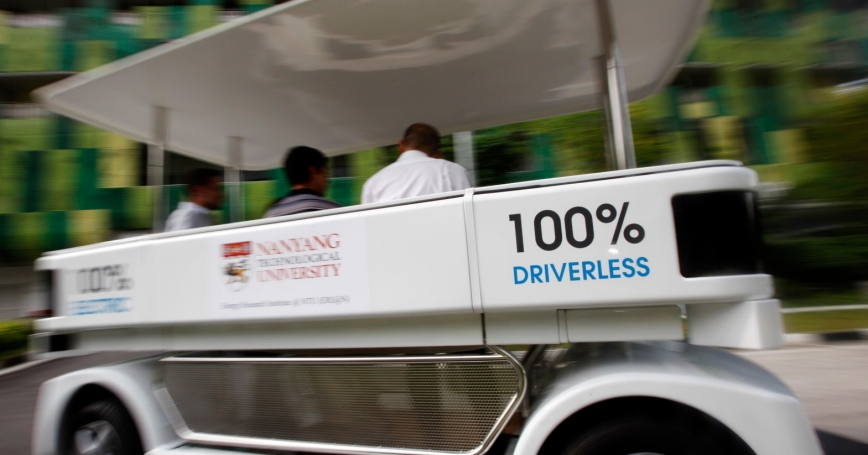 The idea of cars that drive themselves is hardly new. In fact, for decades Americans have been teased with the promise of automobiles that pilot themselves across the countryside, freeing passengers to chat, read, play games, and sleep.

“One day your car may speed along an electric super-highway, its speed and steering automatically controlled by electronic devices,” promised a 1957 magazine advertisement from America's Independent Electric Light and Power Companies. “Highways will be made safe — by electricity! No traffic jams…no collisions…no driver fatigue.”

Futurists of past generations may have been a bit over-optimistic in predicting when self-driving cars would make their debut (a General Motors Corporation exhibit at the 1939 New York Worlds Fair suggested 1960 as reasonable target date), but the promise of autonomous vehicles is finally near to being realized.

And the substantial benefits to society in terms of safety, mobility and fuel economy cannot be ignored. It is not too early for policy makers to begin to think about the challenges that lie ahead and to consider policies that could hasten the arrival of the driverless car.

The benefits of autonomous vehicles are substantial, starting with the value in lives saved. By greatly reducing the role of human error in car crashes, autonomous vehicle technology would likely bring significant reductions in the number of fatal accidents, which now average more than 30,000 per year nationwide and many more worldwide.

At the same time, traffic congestion may be eased since autonomous vehicles, with their more precise breaking and acceleration and enhanced spatial awareness, would allow greater road capacities. More efficient operation means less fuel consumption, pollution and noise. And even where congestion persists, the cost of that congestion would be offset by the increased productivity of people who use time once devoted to driving to conduct other work. For the elderly, children, and the disabled, autonomous vehicles would mean new mobility.

Over time, autonomous vehicles could ultimately impact land use and reshape America's urban environments. Since autonomous vehicles could drop passengers off at commercial and population centers and then park themselves remotely, downtown parking lots could be converted to other uses. And fewer crashes may ultimately allow lighter vehicles, which would further increase fuel economy.

There are important disadvantages, as well. Adoption of driverless cars will cause substantial economic disruption to the many whose jobs depend on driving. Currently, not having to drive is a key selling point of public transit — regional rail, buses and subways. Driverless cars may sap public transit of ridership and lead to decreased service or increased fares.

Perfecting the technology that will allow cars to drive themselves may turn out to be the easy part. In fact, working prototypes already are on the road. Google has developed and tested a fleet of self-driving vehicles that have gone more than a half-million miles without a crash. Audi and Toyota are among the automakers that have offered glimpses of their emerging autonomous vehicle programs.

Nevada, Florida, California, Michigan and Washington, D.C., already have begun the process of regulating the testing and operation of autonomous vehicle technology and other states are not far behind. Policymakers will also eventually need to reform liability and insurance laws to deal with the legal ramifications of vehicles that have no conventional drivers.

Some coordination will be needed to make sure the federal government and the various states don't enact incompatible laws and regulations. A crazy patchwork quilt of different legal regimes could seriously inhibit development. At this point, there are too many uncertainties in the likely development path to attempt to aggressively prescribe a particular set of policies or technologies. Doing so risks locking us into an inferior technology or set of policies. In the short term, “Do No Harm” is an important principle for policymakers.

One key obstacle may be finding the right combination of policy environment and business model. Many of the benefits and costs of autonomous vehicle technology don't go to those who might purchase the vehicle. If my car crashes less, it benefits me, but also all the vehicles around me. Similarly, if I commute in an autonomous vehicle instead of taking the train, I will increase congestion for those around me. A system of subsidies and user fees might be a way of equalizing private and public costs and benefits to ensure efficient adoption.

To be sure, the era of the driverless car is still a ways off, but with continued technological advances and smart planning by policymakers it could be here sooner than many imagine. And that list of benefits envisioned in 1957 — “no traffic jams…no collisions…no driver fatigue” — could finally be realized.

James Anderson is a senior behavioral scientist at the RAND Corporation.

This commentary originally appeared on The Detroit News on January 28, 2014. Commentary gives RAND researchers a platform to convey insights based on their professional expertise and often on their peer-reviewed research and analysis.