Can Rouhani Break Through? 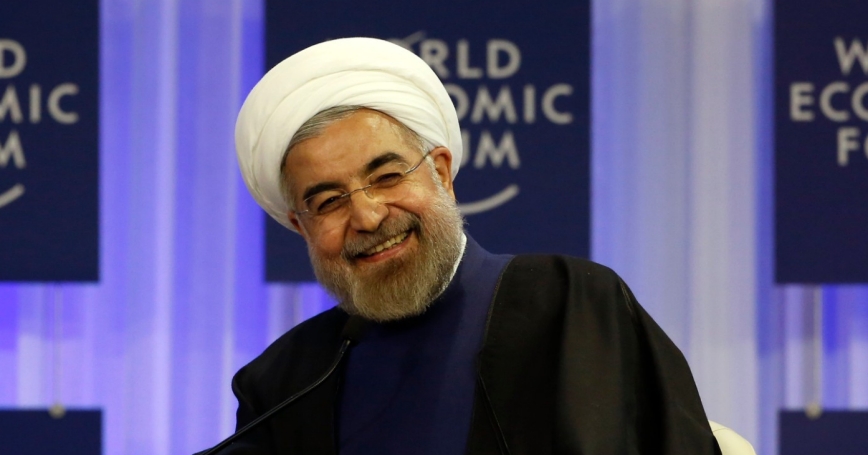 Hassan Rouhani's June 2013 election to Iran's presidency raised the hopes of millions of Iranians suffering from the calamitous policies of former President Mahmoud Ahmadinejad. Rouhani has accordingly done much to fan the flames of optimism in Iran. He has promised to decrease Iran's isolation, improve its economy, and make the country a happier place for its people. His Feb. 5 television interview, billed as a live “discussion” with the Iranian people, was meant to showcase his government's accomplishments in front of the nation. The broadcast was initially blocked by the head of the Islamic Republic of Iran Broadcasting (IRIB), but eventually aired after a puzzling delay.

Rouhani mentioned the delay four times during his interview, stating bitterly that he would not discuss the reasons for it. The interview demonstrated a fundamental reality: Rouhani, while so far effective in Iran's nuclear negotiations, has an uphill battle at home. While the Iranian conservative establishment is likely to support his nuclear policy for now, it is unlikely to concede him the full economic and political agenda he seeks. Not without a fight, anyhow.

Rouhani's interview was politically savvy; he bragged about his accomplishments, including the Geneva nuclear agreement, which he claimed “broke the chains around Iran” and served as a blow to “Iranophobia” being spread by Iran's “enemies.” Rouhani also claimed a significant improvement in Iran's economy and international reputation, although his evidence — 117 foreign groups and trade delegations that have visited Iran since his election — does not demonstrate a major improvement in the economy or Iran's geopolitical position. But the President was honest in listing Iran's numerous problems, from stagflation to horrible pollution and the lack of heating fuel in a country with one of the largest energy reserves in the world. Rouhani asked the Iranian people for more patience given the difficult problems at hand.

Although Rouhani's plea for patience from the public may succeed, he is less likely to get the cooperation he needs from his political rivals. Iran's ultra-conservative camp, once ascendant under Ahmadinejad, is suspicious of Rouhani's intentions and seems to be itching for a fight. For now, the ultra-conservative camp has heeded Supreme Leader Ayatollah Ali Khamenei's advice not to criticize the negotiations and the Geneva deal too strongly. But Rouhani has been criticized for his government's recent handouts to the poor. The long lines formed nationwide for these handouts demonstrated the impoverishment of Iranian society, which is directly tied to the regime's economic and foreign policies. Rouhani has also been critiqued for cavorting with senior reformist clerics, and for embracing a more open media and cultural scene.

The Geneva deal provides a respite for the entire political establishment. But Rouhani taking credit for it so publicly and positively is bound to stir up resentment. Knowing this all along, Rouhani framed his television interview as a discussion with the people in order to build a base of support among millions of his countrymen. His speech barely mentioned the Supreme Leader and the political establishment and, though it was billed as a discussion, it did not feature call-in questions or any live people.

Hoping to finalize a nuclear deal after the progress made in Geneva, Rouhani is already positioning himself to lead Iran after a deal, and perhaps to introduce more fundamental reforms needed to solve the country's many problems.

However, the Iranian regime — composed of Supreme Leader Ali Khamenei's bureaucracy, the Revolutionary Guards, state-owned conglomerates, shadowy pressure groups, and reactionary clerics — is unlikely to concede such a big role to Rouhani. The country is in bad shape, but perhaps not bad enough for Iran's vested interest groups to give in to Rouhani, the self-styled man of the people.

The IRIB chief is appointed by the Supreme Leader; it is not a given that he will stay in his job, especially if Rouhani pressures Khamenei. But the delay in Rouhani's interview may just be a sign of things to come. Geneva is a victory for Rouhani, although he will face a challenge in negotiating a final nuclear deal with the United States and its allies. However, his greatest challenge may be at home. Rouhani has promised to tackle Iran's monumental problems, but his ability to do so remains in doubt.

This commentary originally appeared on lobelog.com.

This commentary originally appeared on Lobe Log on February 6, 2014. Commentary gives RAND researchers a platform to convey insights based on their professional expertise and often on their peer-reviewed research and analysis.