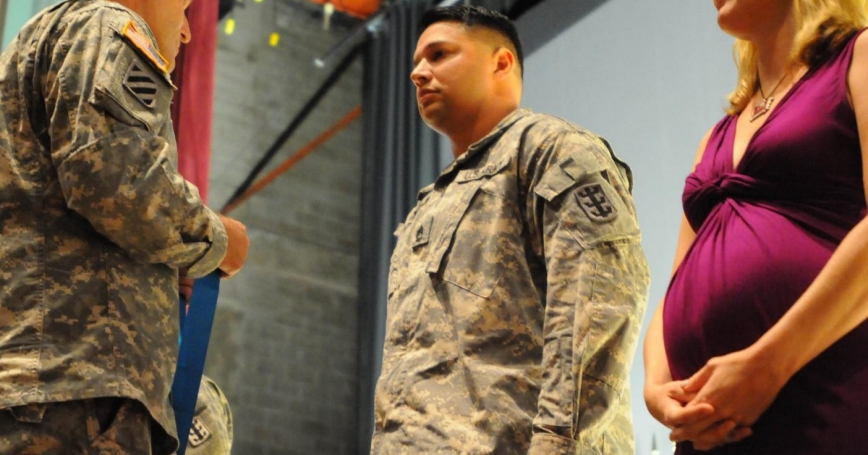 Sgt. First Class Richard Martinez is given the Milton Award that recognizes achievements in military intelligence during a redeployment ceremony

I have a confession to make: I was a terrible Army wife, an awful military spouse.

My entry into that group came late and from what seemed like an odd direction. I enlisted in the Army at 22 and deployed to Iraq a few years later. When I came home after a year in a combat zone and saw bumper stickers in the commissary parking lot that read “Army Wife: Toughest Job in the Army,” accompanied by a drawing of a rose, I rolled my eyes. “No one is shooting at you,” I would mutter under my breath. “No one is dropping mortars on you. It can't be that bad.” Ah, hubris. A single woman with no kids — how little I knew.

Within a year, I was married to another service member, a soldier who had sustained a penetrating traumatic brain injury (TBI) in Iraq and subsequently developed post-traumatic stress disorder (PTSD). When my five years in the Army was up, I got out and joined him at Walter Reed Army Medical Center to help him on his road to recovery. The transition from soldier to spouse, sergeant to civilian, team leader to caregiver was a difficult one for me. The first few months, every time I had to show my new salmon-pink dependent ID card to get into the commissary, I blurted out, “I was in the Army, too!” to the befuddled employees who couldn't have cared less. I missed doing PT, missed the comforting uniformity — and cargo pockets — of my uniform, missed the camaraderie of working with troops I'd been to combat with. In a new city at a new installation, I felt isolated and alone.

If there were support groups for the families of wounded warriors at Walter Reed in those early days — this was 2005 — I never heard about them. The case managers and doctors never asked how I was doing, and the military ethos of “suck it up and drive on,” made me loathe to seek help, even though I was struggling with my own reintegration and the challenges of learning how to help my husband heal. I was no longer a soldier, but didn't feel like “just a wife.” And since Walter Reed wasn't a deployable unit like the 101st Airborne Division (Air Assault) where we'd come from, there was no Family Readiness Group (FRG) where I could meet other military families and start to form relationships. Six months after I got to the DC area, my husband was medically retired and we were both veterans — my tenure as a military spouse had lasted a mere nine months.

It wasn't until we had children years later that I began to reconsider (and regret) my initial dismissive attitude toward the challenges Army wives alluded to in their bumper stickers. My husband volunteered at the local fire and rescue department, which included a 6 p.m. to 6 a.m. shift at the fire station once a week. It wasn't a big deal when we only had one kid, but once the second came along I started to dread those nights, along with the weekend-long training that was sometimes required. Wrangling an infant and a toddler solo for those short periods of time left me frazzled and tense. “How did they manage a year or more?” I began to wonder.

Recently, I decided to learn more by reading books by two military wives: Lily Burana's I Love A Man in Uniform and Alison Buckholtz's Standing By: The Making of an American Military Family in a Time of War. They opened my eyes to both the tremendous challenges and unexpected rewards of marrying into the military, and the unique kind of service our military families experience. Both women married officers once they were themselves a bit older and more experienced — these are not tales told by girls who grew into women while married to enlisted troops. But they are also both exquisitely aware of the added privilege this gave them in terms of higher pay and better housing — as well as the additional pressure to maintain a certain image and role in the community of spouses.

Lily married an Army officer shortly before he deployed and moved with him to West Point upon his return. Her transition from staunchly independent punk-rock roots and her time as a stripper to being in an interdependent relationship with a strong soldier in a cloistered environment dredged up buried memories of childhood trauma. It took intensive therapy to strengthen her psychological health and save her marriage.

Alison married a Navy officer after living and working in a liberal DC-area enclave, then moved with him to Japan and then Washington state. They had two children and she spent many months on solo parenting duty while her husband spent time training up for and then serving on deployments. It took support from family, friends and local communities for their family to thrive during the long separations.

Neither of these women came from military families, and both were shocked at the ways in which fellow military spouses pulled together in times of crisis to support families in need. Both initially feared they would have to give up core components of themselves if they wanted to “fit in” to the new world they had joined, and were pleasantly surprised by the diversity of personalities and backgrounds they encountered. And though they initially balked at the traditional gender roles they were expected to play as the wives of officers, both came to feel proud of the ways in which they could serve other military families.

When I was active duty, I rarely encountered military families outside mandatory FRG meetings and had never gotten close to any of them. And in my mixed-gender Military Intelligence unit, there were lots of dual-military marriages (among married military women, around half are married to fellow servicemembers). Women veteran friends of mine have groused that their comrades — their brothers-in-arms, upon whom they depended for survival in combat — couldn't hang out with them stateside post-deployment because their teammates' wives feared emotional entanglement. I heard hints that Navy wives were opposed to opening submarines to women sailors, fearing affairs. So perhaps the most surprising thing to me about both of these books was how warmly the authors spoke about military women. Both Lily and Alison expressed respect and affection for the female servicemembers they met and saw, which reassured me that there need not be antipathy between these groups.

A fantastic recent piece by Phil Klay urges civilians to stop saying they can't imagine what veterans have been through, and to instead make the effort to do so. I love that message. We're willing to watch movies like Twelve Years a Slave to try to imagine that experience, willing to read books about being young wizards and let our imaginations take us into that world — why can we not do the same for troops and veterans? Reading these two books was a way for me to stop saying, “I can't imagine how hard it would be to deal with your spouse's deployment” by immersing myself in that experience. Lily and Alison are both tremendous writers, able to open a window for the rest of us into what it feels like to be in a military family today. I urge civilians and troops interested in learning more — along with military spouses feeling lost or alone — to pick up these volumes.

I wish I could find the Army wives whose bumper stickers I frowned at back when I was active duty and apologize for how little I understood their services and sacrifices. Since that is impossible, I now open my talks with a simple message: “To all the troops and veterans in the audience, I'd like to say 'Welcome Home.' And to all the military family members, 'Thank you for your service.'”

Kayla Williams is the author of Love My Rifle More Than You: Young and Female in the U.S. Army. She was formerly a sergeant in a military intelligence company of the 101st Airborne Division (Air Assault).

This commentary appeared on huffingtonpost.com on February 26, 2014.