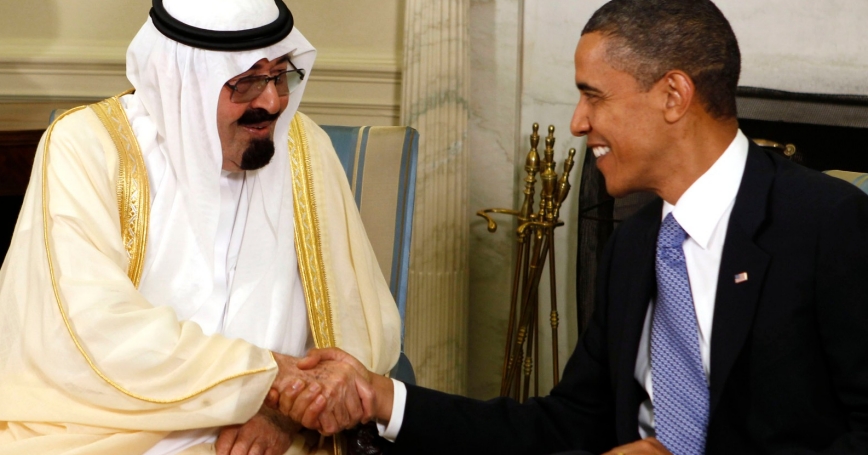 President Barack Obama’s upcoming trip to Saudi Arabia to meet with King Abdullah offers an opportunity to engage in a much needed dialogue about the future of the conflict in Syria and to hear what a strong ally and friend has to say about stability in the region and the impact of this devastating conflict. Violence is already spilling over into Iraq and Lebanon and threatens U.S. allies in Jordan, Turkey, Israel and the Arab Gulf. The longer the war goes on, the harder and more resistant to change the attitudes of people in the region will become. A prolonged war has already created the conditions for an enduring legacy of radicalized youth that will threaten the region’s stability for years to come and deepen the divide between Sunni and Shia.

Although the Geneva negotiations between Syria's government and opposition appear to be gaining little ground, there is no reason to discount other possible diplomatic options for bringing about peace. The March meeting between Obama and King Abdullah could present an opportunity to begin remapping a path toward peace, one that could include the partitioning of Syria under the watch of outside peacekeepers. But striking out on such a bold course would have to begin with a different set of on-the-ground, geopolitical considerations — ones that didn't exist at the start of the conflict.

First, Syria is no longer one country but is at least two: one Sunni and one Shia. The Kurds in the north might be considered yet a further division. Second, Syria is no longer the predominantly mixed, secular state it used to be. The religious landscape has changed and its population is now radicalized. Each side in the conflict views the fight as a threat to its existence. Third, Syrian President Bashar al-Assad's ability to weather the onslaught of revolt and to gain momentum against the opposition means that he has to be considered part of the solution rather than remain outside it. The fourth and perhaps most important realization is that al-Qaida and its affiliates pose a greater threat to the security of the United States and the stability of our allies in the region than does Assad.

King Abdullah might dispute some these points, but friends speak truth to friends and the reality is that the conflict unimpeded will spread further in the region and eventually end up on his doorstep. Reversing this trend and the subsequent potential for the spillover of violence throughout the Middle East will require efforts to first stop the killing. Stopping the killing is unlikely if each side in the conflict continues to receive outside military assistance and if Assad is offered nothing in return for a ceasefire.

The king might be open to the idea of discussing these options if the Russians and Iranians are brought into the talks in Geneva and agree to persuade Assad to accept an armistice and a partition of the country to preserve the areas he has carved out for the Alawites and other Shia. These actions might require an international stabilization force to secure safe areas inside Syria where aid can be delivered to returning refugees. The dispersal of aid is simply not possible while the fighting continues. The threat of a credible stabilization force alone might convince Assad and his supporters to agree to a settlement. An external peacekeeping force, as in Bosnia in the 1990s, would change the nature of the game for him. This is diplomacy with both a carrot and a stick.

Undertakings of this magnitude will not be easy and will not be without risk, but will do more to ensure the security of the United States and stability of the countries it relies on most in the Middle East. As President Bill Clinton noted in 1999 in a speech about Kosovo: “What will matter is whether the cause is just, not whether the cause is dangerous.” Acting sooner, even if it's dangerous, is better than waiting for matters to get worse. These are thoughts King Abdullah will appreciate from a friend.

This commentary originally appeared on U.S. News & World Report on February 28, 2014. Commentary gives RAND researchers a platform to convey insights based on their professional expertise and often on their peer-reviewed research and analysis.