How the West Can Help End the Violence in Ukraine 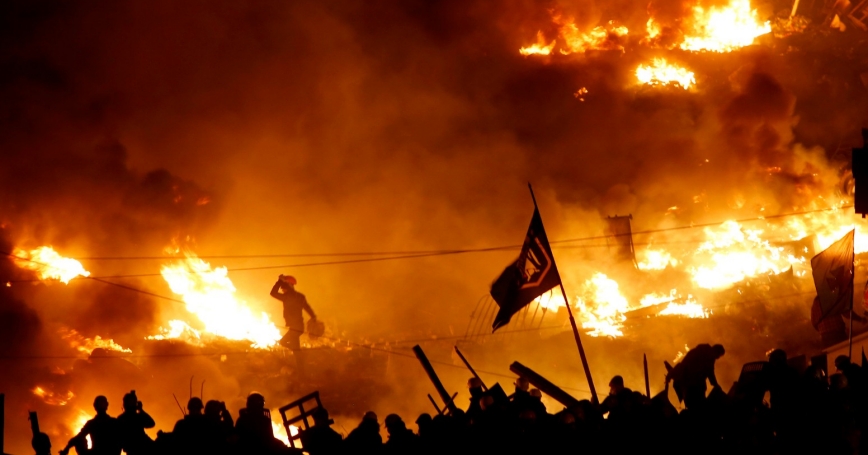 The Ukrainian crisis has taken a dangerous and deadly turn for the worse with violent clashes between protesters and Interior Ministry troops, including the assault on the main protest encampment on Independence Square in Kiev Tuesday night that left more than 20 people dead.

With this alarming escalation in violence between the protesters and the beleaguered government of President Viktor Yanukovych, events are in danger of spinning out of control. State power is rapidly disintegrating. Autonomous self-defense units are springing up in various parts of the country, increasing the prospects for even more widespread unrest.

The recent escalation in violence, the worst since protests began in November, was widely condemned by European leaders. The White House called on the Yanukovych government to pull back its forces and open a dialogue with opposition leaders. The United States and the EU are considering punitive sanctions.

These are critical steps to end the bloodshed, but the West also should move quickly on an aid package conditioned on economic and political reform. Even as it focuses on the violence and unrest that currently grips Ukraine, the West must not lose sight of longer-term goals.

Of immediate concern is preventing the fighting from escalating still further into a bloody civil war. The risk of a broader conflict would increase significantly if Yanukovych feels compelled to call in the army in a desperate last-ditch attempt to restore order. However, such a course is fraught with serious risks, especially if some army units refuse an order to fire on their fellow citizens.

If the violence persists, Yanukovych could face growing opposition within his own party to step down as president, especially from the oligarchs, a group of some 20 billionaires who control nearly one fifth of Ukraine's GDP.

Many oligarchs, like Rinat Akhmetov, Ukraine's wealthiest man, see their long-term economic interests linked to Europe and European markets. They do not want Ukraine to become an appendage of the Russian economy. They resent the centralization of power in the hands of Yanukovych and his family.

So far the oligarchs have remained largely on the sidelines, but if they conclude that Yanukovych is no longer able to prevent widespread civil strife and protect their economic interests, they could act to force his ouster as president, replacing him with someone who is less tainted and more acceptable to the opposition. A government so closely associated with the oligarchs could bring its own set of problems.

A transition could occur rather quickly, leaving a power vacuum that could be highly destabilizing. The West therefore needs to move quickly to work out a coherent plan to end the violence, establish order and set Ukraine on a course toward long-term stability.

A stable, independent and democratic Ukraine closely linked to Europe is strongly in the West's strategic interest. As Zbigniew Brzezinski has noted, without Ukraine, Russia ceases to be a Eurasian empire.

A reorientation of Ukrainian policy back toward Russia would also make it much more difficult for Georgia and Moldova to continue their pro-Western course and diminish the prospects for reform in Belarus.

The United States and the EU should closely coordinate their policies and put forward an interim emergency aid package to help Ukraine avoid default. This package should be conditioned on the willingness of a new provisional Ukrainian government to introduce an economic and political reform program and a promise to hold parliamentary elections within three months.

Part of the emergency aid package should be directed at helping Ukraine reduce its dependence on imported energy from Russia and attract foreign direct investment in the energy sector.

Russia may also cut off gas supplies to Ukraine as it did in January 2006 and January 2009. Since about half of Russia's gas supplies to Europe currently flow through Ukraine, such a move would have a serious impact on Russia's ability to meet its commitments of natural gas to Europe. The EU should warn Russia in no uncertain terms that such a move would have serious consequences for Russia's energy and trade relations with Europe.

The U.S. and EU must act quickly to advance the parallel goals of ending the violence now and promoting a stable Ukraine moving forward.

This commentary originally appeared on U.S. News & World Report on February 19, 2014. Commentary gives RAND researchers a platform to convey insights based on their professional expertise and often on their peer-reviewed research and analysis.