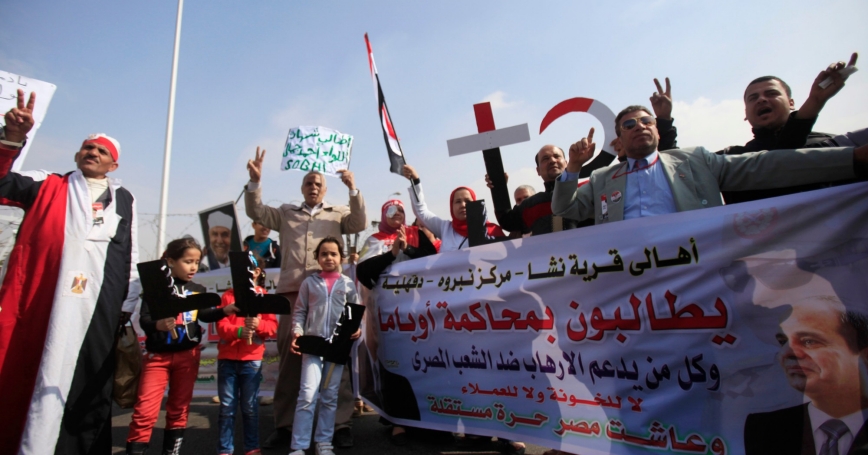 How the Country Could Rescue Itself From Military Dictatorship

In the seven months since former Egyptian President Mohamed Morsi was booted from office, Egypt has fallen into a disheartening but predictable pattern: The generals consolidate power while their allies in the Interior Ministry crack down on the Muslim Brotherhood. Now, with the front pages of half of Egypt's papers proclaiming the virtues of Abdel Fattah al-Sisi, Egypt's new strongman in waiting, and the other half running tales of the Brotherhood's terrorist connections, the question in Egypt is no longer what is going on — the trajectory, a return to military dictatorship, should be clear to anyone. Rather, the question is what, if anything could, change the future.

To be sure, one should be careful about betting against a regime with an overwhelming advantage in both firepower and public support, but the current order does have two Achilles' heels. First, as the threat of the Muslim Brotherhood reclaiming power recedes, it will become difficult for the new authorities to hold together a coalition that is built solely on its members' shared antipathy for the Islamist group. Second, the new regime might overreach in its suppression of the opposition, inviting a backlash like the one that eroded public support for the interim government led by the Supreme Council of the Armed Forces (SCAF) two years ago.

Egypt's governing coalition is a strange mix of state institutions and political forces. Its core is made up of the officer corps, the internal security apparatus, the judiciary, the state media, and public-sector bureaucrats — all of which are often lumped together as the deep state. Fronting for the deep state is what passes for civilian leadership in Egypt these days: a hodgepodge of opportunistic leftists, liberals, and ultraconservative Salafists. These groups have bandwagoned with the military in the hopes of avoiding the fate of the Brotherhood, which, in a few short months, saw the generals freeze its assets, incarcerate its senior leadership, and officially designate it as a terrorist organization.

For now, the quest for influence and self-preservation has kept the civilians on board. The only significant defections have been Mohamed El Baradei, the former head of the International Atomic Energy Agency, who resigned after briefly serving as vice president, and Ziad Baha Eddin, the lawyer and economist who left his post as deputy prime minister and minister of international cooperation. El Baradei left in protest over the authorities' decision to use lethal force against the Brotherhood encampments in Cairo's Rabaa Square and Nahda Square. Baha Eddin had a falling out with his fellow ministers after he opposed a new law that places severe restrictions on freedom of assembly in the name of security. But these hiccups aside, the coalition supporting the military has held — even when the military has made decisions that go against the interests of some of its members, including watering down the Islamic clauses in Egypt's new constitution, which had previously been a red line for the Salafists.

But none of this means that the coalition will survive forever. With each passing month, it seems less likely that the Muslim Brotherhood will return to power. With the Brothers out of the way, the other parties are beginning to jockey for power in the new order. The main Salafist party, Nour, appears destined for disappointment, having convinced itself that it would inherit the Brotherhood's former popularity without fully grasping how far the Islamist brand has fallen since the heady days of 2011 and 2012. On the other side of the political spectrum are the secular parties, such as the Free Egyptians, Wafd, Tagammu, and Nasserists, all fighting for similar constituencies and the crumbs of authority left over from the real powers that be.

That does not bode well for the military, which is used to holding all the cards as it plays political forces off one another. The traditional arrangement was to have a single dominant party securing the generals' interests while smaller parties bludgeoned each other in a show of political competition. But with no single party left to play that primary role and none on the horizon, the generals will need to hold together a fractious coalition as they fight over the same cake. Even if the generals' civilian coalition breaks down, they may still be able to govern unilaterally. But without the barest window dressing of civilian rule, that will be much riskier business.

The other thing that could work against the military is if some of its partners — in particular those that dare to covet influence as much as survival — tire of an arrangement in which they pay all of the costs of governing while Sisi and his colleagues hold all the power. Already, the government bears the brunt of public criticism as Sisi continues his national tour of adulation. And it shows in the poll numbers. Today, only 20 percent of the Egyptian public believes the cabinet led by Prime Minister Hazem el-Beblawi is doing a good job.

Internal cohesion seems most tenuous when it comes to the Salafists, who have always been the most uncomfortable fit in the current coalition. The Nour Party, which finished second to the Muslim Brotherhood in the first post-revolution parliamentary elections, calculated that the removal of the Muslim Brotherhood from formal politics would boost its own electoral prospects. But to reap those rewards, Nour had to break with its fellow Islamists and support the military's removal of Morsi. Although Nour refused any ministerial posts in the cabinet, its support for Egypt's new authorities has alienated its rank and file and could prove short-sighted if Sisi consolidates too much power before a parliament is elected or if his government attempts to subject Nour to any legal restrictions that would limit its take in the elections. If Nour bails, the coalition would be devoid of any Islamist representation, which would isolate the government still further from Egypt's religious population.

The other risk is that Egypt's new powerbrokers could overreach in their crackdown on the opposition. The authorities' scorched-earth approach suggests that this would not be out of the realm of possibility. Not only has the military-backed order attempted to obliterate the Muslim Brotherhood — an organization that is more than 80 years old and still commands a large following — from public life, but the regime has put non-Islamist oppositionists in its crosshairs as well. In addition to arresting prominent youth activists such as Ahmed Maher, Ahmed Douma, Mohamed Adel, and Alaa Abd El Fattah, the state is pursuing cases against prominent intellectuals who dare to speak against it. Among those facing official investigation and travel bans are Amr Hamzawy, an academic-turned-politician who formerly worked at the Carnegie Endowment for International Peace, and Emad Shahin, a political scientist who taught at Georgetown, Harvard, and Notre Dame. The accusations — insulting the judiciary for Hamzawy and conspiring with the Muslim Brotherhood for Shahin — are indicators of just how thin-skinned the new regime is.

Up to this point, there has been little public outcry about the authorities' intolerance. This is partly due to the fact that the Egyptian public has taken a beating over the last few years and is willing to trade some liberty for stability. And on this count, the recent uptick in jihadi attacks on Egyptian security forces only boost public approval for a new security state. Part of the muted response also stems from liberals' all-encompassing hatred for the Muslim Brotherhood, which blinds them from the excesses of the Brothers' successor. And of course, fear deters still more from speaking out.

But the world has watched this movie before. Two years ago, it was the SCAF that appeared immune to backlash. Despite the SCAF's repeated missteps, clumsy handling of the economy, and use of force against demonstrators, the public stood by the SCAF and its head, Field Marshal Mohamed Hussein Tantawi. But all that fell apart rather quickly, particularly after the “blue bra” incident, in which military police were recorded stripping a female protester down to her undergarments and stomping on her midsection. The SCAF took a hit and, soon thereafter, accelerated the timeline for presidential elections in apparent deference to building opposition.

The current incarnation of military rule seems to have internalized the lessons from its predecessors' errors, namely, they are steering the country through a more orderly and streamlined series of transitional steps. But the new authorities' extreme sensitivity to dissent could yet be its undoing. It is one thing to assert that the Muslim Brotherhood, an organization that condemns violence, is responsible for attacks claimed by the Sinai-based jihadi organization Ansar Bayt al-Maqdis. Such attempts at guilt by association, although strained, appeal to the segment of Egyptian society suspicious of the Brotherhood's intentions. But it is quite another to claim that a professor who happens to study political Islam, as Shahin does, is involved in conspiring with the Muslim Brotherhood against the state. The Egyptian public's exact tolerance for the military's strategy is yet unknown, but it would be foolish for the new authorities to think there are no limits.

At this point, the military-backed order holds the strongest hand. With firepower and the media on its side, and the standing of Islamists and revolutionary youth in decline, the new authorities do not have to play their hand particularly well to stay on top. But there is a risk that Egypt's new regime will, like the SCAF before them, become a victim of its own success. Should the generals take for granted the public's support, they could find themselves in the middle of another transition.

In either case, the future does not appear bright. Should the new regime avoid the pitfalls of infighting and overreach, the country will once again be at the whims of the generals. If the new order succumbs to these temptations, Egypt will have another go at its seemingly perpetual revolution.

Jeff Martini is a Middle East analyst at the RAND Corporation.

This commentary originally appeared on Foreign Affairs on February 11, 2014. Commentary gives RAND researchers a platform to convey insights based on their professional expertise and often on their peer-reviewed research and analysis.