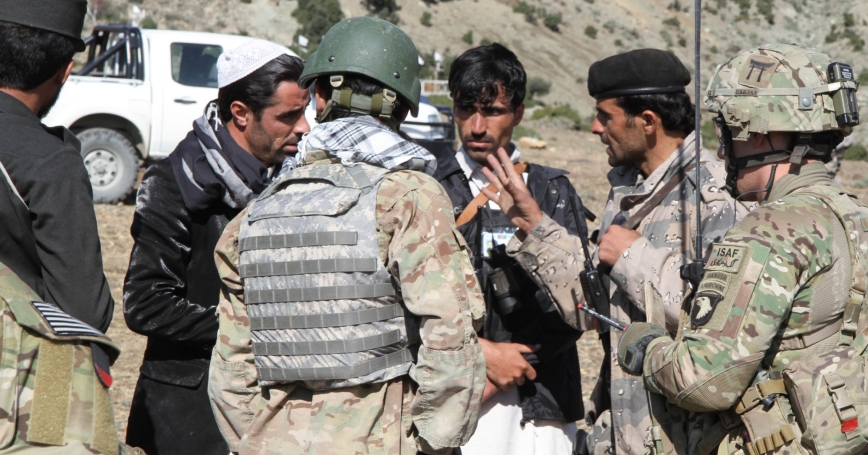 During his State of the Union address last month, President Obama reiterated his commitment to withdrawing U.S. troops from Afghanistan by year's end and, with that, he said, “America's longest war will finally be over.” But when most American boots leave Afghan soil in December, the U.S. mission there does not end.

But the overarching mission of preventing al Qaeda from threatening the United States is an enduring one that will require a long-term commitment not just to counterterrorism, but to training, advising and assisting Afghan forces so that they are better able to prosecute their own campaign against the terrorists in their midst.

The Pentagon has recommended that 10,500 U.S. troops remain in Afghanistan after the end of the year to continue targeting al Qaeda-affiliated fighters and to provide advice and assistance to Afghan security forces. But there are those who favor leaving a much smaller force of perhaps 2,000 behind to conduct counterterrorism operations without devoting resources to helping Afghan forces meet their own security needs. This would be a mistake.

Counterterrorism and assisting Afghan forces are not distinct and separate jobs, though they are being portrayed that way by some. My colleagues and I have examined past episodes in which the two missions have occurred simultaneously and found that they complement and reinforce each other in many ways. Conducting both missions in coordination can provide the kind of force multiplication needed to accomplish long-term U.S. goals and prevent Afghanistan from reclaiming its position atop the list of the world's terrorist safe havens.

Continued support to Afghan security forces will increase the Afghan government's political commitment to our counterterrorism objectives, while at the same time enhancing the Afghan forces' own counterterror capabilities.

Recent U.S. operations in the Philippines, the Horn of Africa and Yemen demonstrate the importance of combining counterterrorism operations with support for local security forces.

In the Philippines, U.S. special operations and other military forces provided a persistent advisory presence averaging 600 troops over the last decade to successfully counter the threat from Abu Sayyaf and Jemmah Islamiya militants in the southern part of the country. An advisory headquarters command served to unify the effort and coordinate with the host nation and interagency partners at the U.S. embassy.

In the Horn of Africa, U.S. special operations and other military forces have provided training, advice and assistance to Kenya, Uganda, Djibouti, Ethiopia and other countries participating in the peacekeeping mission in Somalia. These efforts helped to dislodge the terrorist group Al-Shabaab from Somalia's capital, other cities and much of the south. The security umbrella has allowed a federal Somali government to stand up for the first time since 1991.

Yemen provides an example of what happens when training, advice and assistance are not made priorities. There, the assistance to local forces has been episodic and restricted to counterterrorism units. Long interruptions in training and the narrow scope of the advisory mission limited its effectiveness, as the United States has been forced to rely more heavily on direct strikes against terrorist targets. Yemen is a cautionary tale, one that demonstrates the limits of assistance that is not accompanied by sufficient political will and a comprehensive program to create forces capable of collecting intelligence, holding territory, policing borders, as well as conducting counterterrorism missions.

To be effective in Afghanistan, an ongoing U.S. advisory presence should follow certain best practices suggested by recent experience. These include a robust presence that is persistent rather than episodic, of sufficient duration to build the needed skills, and distributed among Afghan Army and special operations units in key areas of the south and east where armed groups are strongest. This distributed footprint would enhance U.S. situational awareness of both terrorist activity and the level of competence that Afghan forces are achieving.

Training, advice and assistance can be powerful contributors to furthering counterterrorism goals, while at the same time giving the Afghan government and its people reason to back the continuation of U.S. counterterrorism operations in their homeland. The investment in training and assistance also will provide legacy value, as Afghan military and police forces become better able to conduct unilateral operations. Maintaining a counterterrorism mission alone is not enough.

Linda Robinson, a senior policy analyst at the RAND Corp., is author of the new book, “One Hundred Victories: Special Ops and the Future of American Warfare.”

This commentary originally appeared on breakingdefense.com.

This commentary originally appeared on Breaking Defense on February 10, 2014. Commentary gives RAND researchers a platform to convey insights based on their professional expertise and often on their peer-reviewed research and analysis.