Will America Forget Its Veterans? 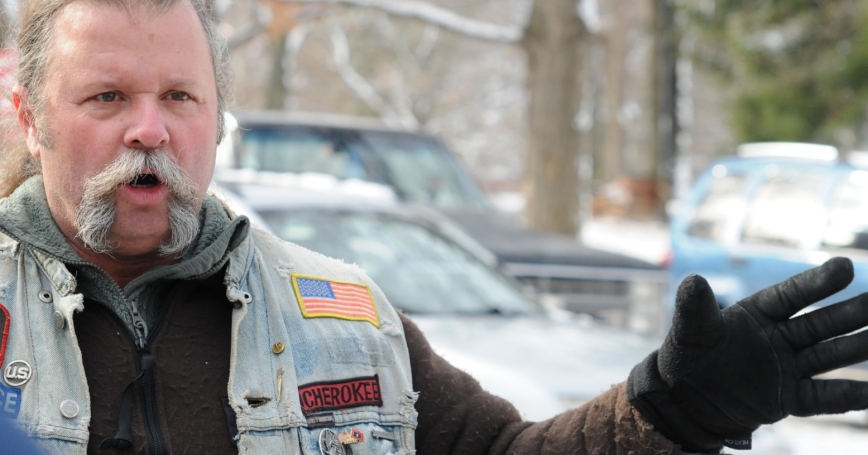 Air Force veteran Cherokee was the lead organizer of an event in January in Reading, Pa. to help feed and clothe local veterans

When the camera first panned to Michelle Obama sitting next to Sgt. 1st Class Cory Remsburg, a wounded warrior, during President Obama's State of the Union message last month, my breath caught in my throat. This proud noncommissioned officer was a guest of the first lady, and his presence alone was forcing all who saw him to remember that America remains a nation at war.

Later, the president told the story of meeting Remsburg shortly before he was injured on his 10th combat deployment, and of the long and grueling path to recovery he still travels. My family knows that road all too well. My husband, Brian, sustained a penetrating traumatic brain injury from a roadside bomb in Iraq in October 2003, long before many of today's systems and services available to support wounded troops and military families existed. He "slipped through the cracks," and we both spent time on unemployment while waiting for his benefits to start after he was medically retired from the Army. He received no rehabilitation for his brain injury and got only sporadic mental-health care for his debilitating post-traumatic stress disorder.

And yet, we persevered, forming a supportive network of fellow veterans and gradually finding a new place in our community, with new ways to serve. It took six years before Brian could read a book again, but last month, he began using the GI Bill to attend college. Like Remsburg, we never quit.

My biggest fear is that the American people will forget us — their veterans. I worry that as the visible reminders of the wars in Iraq and Afghanistan fade from popular consciousness, so will the attention paid to troops, military families, and veterans. Yet the needs of US veterans will not end when the war does; they will just be beginning. Though over a lifetime veterans are more highly educated, employed, and paid than their civilian counterparts, the period of reintegration can be challenging.

Coming home to a nation distracted by celebrity gossip and seemingly oblivious to the experiences of deployed troops was jarring and disconcerting. As a woman veteran, I felt particularly invisible. Many people had no idea that women were serving in combat alongside men, despite what the regulations said about keeping us out of direct ground combat jobs and units. Reentering the workforce was challenging. It was tough to translate military skills and experiences into civilian terms, and to adjust to a less hierarchical, more collaborative environment. Attending college classes with people fresh out of high school can feel like being in a war-tested version of the Adam Sandler movie "Billy Madison."

Brian and I are very fortunate: Over the years, he has enjoyed tremendous cognitive and psychological improvement, we have been able to access mental-health care when needed, and we have both used benefits we earned from the Department of Veterans Affairs. Today, we are contributing community members, solid employees, proud parents, and a strong married couple.

As today's troops come home, become veterans, and reenter civilian society, communities across the country should come together to ensure they have a smoother transition than we did. The military gave them superb practical and leadership skills they can put to good use here at home; give them the chance to use them. We never forgot about you while we were deployed. Don't forget about us when we come home.

Kayla Williams is a project associate at the RAND Corp. and author of the recently released “Plenty of Time When We Get Home: Love and Recovery in the Aftermath of War.”

This commentary originally appeared on Christian Science Monitor on February 18, 2014. Commentary gives RAND researchers a platform to convey insights based on their professional expertise and often on their peer-reviewed research and analysis.