4 Ways the U.S. Can Do More for Ukraine 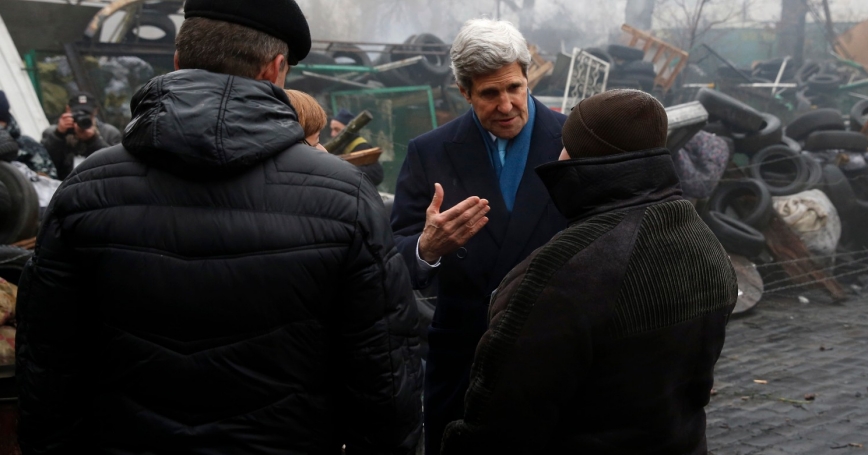 U.S.Secretary of State John Kerry at the Shrine of the Fallen in Kiev, Ukraine

The events of the past few weeks in Ukraine and the belligerence of Russian President Vladimir Putin have sent Ukraine spiraling backwards about 20 years, back to a time when Ukraine was viewed as a buffer or even a bulwark between Russia and the West. This line of thinking is dangerous for Ukrainian sovereignty and also for American interests.

In the face of Russian military advances in Crimea, Secretary of State John Kerry’s visit to the strife-ravaged Eastern European nation is the kind of high-level diplomatic engagement that is needed to reassure Kiev that the West is on its side. And the announcement from the White House that it is putting together a $1 billion economic and energy loan package for Ukraine is also welcome news. But the United States and its European allies can, and should, do more moving forward.

The United States and Ukraine have a long standing strategic partnership. The United States provides an average of $120 million a year to Ukraine through Foreign Operations Appropriated Assistance and has conducted dozens of military and other security- and reform-related engagements in the last year alone. According to the State Department, the priorities of this assistance are to “strengthen democratic institutions and processes, deepen market reforms, and advance Ukraine's integration into Euro-Atlantic structures.” These priorities are clearly in jeopardy. The United States should not lose focus on these goals by allowing Ukraine to become merely a theater for combating Russia's influence and responding to provocative actions of Russian troops.

The fledging interim Ukrainian government and especially the Ukrainian people, regardless of ethnicity, need to know that America is concerned about them. Above all the United States needs to send a sustained strong signal to the interim Ukrainian government and to Putin that the United States pledges solidarity with Ukraine as an independent state. The administration understands this, as evidenced by the planned aid package and by Kerry's tough talk. As we learned from the Russian military invasion of the Republic of Georgia in 2008, the United States must do whatever it can to try heading off these Russian bullying tactics.

To maintain the diplomatic momentum, the United State should take four further steps immediately to reassure the interim government of Ukraine and the Ukrainian people.

First, the United States needs to work closely with its allies, the U.K. and Germany in particular, to identify diplomatic options to resolve the crisis. Second, although Brussels has been irritatingly quiet, the United States must push NATO and the EU to issue strong communiques condemning Russian tactics and assuring Ukraine, and indeed the other post-Soviet republics, that they have support in the West. Third, the United States should reach out to regional partners, Poland in particular, which have strong ties to the western regions of Ukraine. Fourth, the United States must reinforce security cooperation with Ukraine. This does not require boots-on-the-ground, but rather a concerted outreach effort targeting officials the U.S. military has worked with in the past to reassure them of America's commitment to the sovereignty of Ukraine.

The United States has a vested interest in helping to ensure Ukraine's future and it must do all it can to reassure Ukraine it has loyal friends in the West. Ukraine has been in this position before and a return to those days is hardly in its interest. It is time to get past this line of thinking and move ahead with more forward-thinking goals focused on reforms and ever closer ties between Ukraine and Euro-Atlantic structures.

Jennifer Moroney is a senior political scientist and the director of the Defense and Political Sciences Department at the nonprofit, nonpartisan RAND Corporation.

This commentary originally appeared on U.S. News & World Report on March 4, 2014. Commentary gives RAND researchers a platform to convey insights based on their professional expertise and often on their peer-reviewed research and analysis.