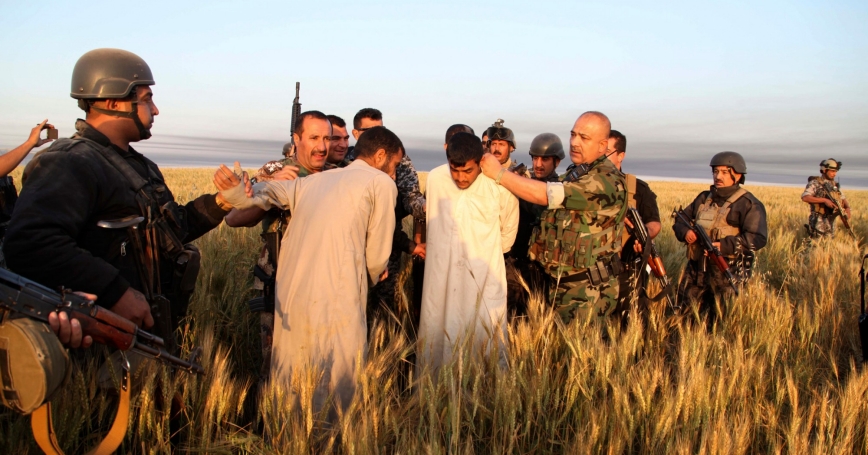 Iraqi security forces arrest suspected militants of the al Qaeda-linked Islamic State in Iraq and the Levant (ISIL) in Hawija on April 24.

Al Qaeda's universe may be rent by centrifugal forces resulting from its own recent expansion, but that expansion itself reflects a remarkable achievement.

Although thousands of volunteers had passed through its training camps in Afghanistan before 9/11, by the end of 2001, al Qaeda consisted of a few hundred fighters on the run. The camps' scattered alumni carried on a global terrorist campaign with attacks in North Africa, the Middle East, Southeast Asia, and Europe.

These attacks prompted governments to rip up local jihadist networks. But the resilient terrorist enterprise was quick to exploit new opportunities created by the turmoil that accompanied the Arab uprisings, especially the civil war in Syria. The jihadist universe today — including its affiliates and allies across the Sahel and in the Levant, as well as the now renegade Islamic State of Iraq and the Levant (ISIL), which al Qaeda expelled — consists of many thousands of armed men assembled from all over the world. The proliferation of al Qaeda's black flags is a dramatic resurgence, but this also unleashed unruly internal forces that could splinter the jihadist movement.

Osama bin Laden remained suspicious of anything outside his immediate control. After prolonged negotiations with groups aspiring to the al Qaeda franchise, some lasting years, mergers happened because he was unable to stop them. Other aspirants were successfully resisted. Following bin Laden's death, Zawahiri, his longtime lieutenant, managed to stay in charge of the disparate al Qaeda enterprise, but he did not inherit bin Laden's moral authority and was viewed less as al Qaeda's commander than as its ideological commissar. Under Zawahiri's weakened command, the process of mergers and the creation of new affiliates accelerated.

Since al Qaeda's primary objective is to continue its armed struggle, it portrayed this expansion as good news. Each new front guaranteed a new generation of jihadists. Many analysts agreed that al Qaeda's geographic spread over the past several years was a sign of growing strength — certainly it demonstrates that the al Qaeda banner still has appeal. But it might equally be seen as a sign of al Qaeda's weakness — a lowering of the bar to membership, evidence of al Qaeda's growing dependence on others and ultimately of its inability to impose its will on its own rebellious and recalcitrant field commanders.

The most serious rift is that between the ISIL and al Qaeda's affiliate and allies in Syria. It has erupted into open warfare between the groups and threatens to cleave across the jihadist universe.

In the long run, al Qaeda might be able to reel in its more unreliable offspring, assert more control, demand their obedience, and call upon their resources to assist in global operations. But without a stronger center, perhaps operating from safer bases in Pakistan or a new base in Afghanistan after the Americans withdraw, that possibility seems remote.

While jihadist factions slug it out in Syria, al Qaeda central will continue to orchestrate denunciations of ISIL's betrayal of the global jihad and disunity it represents. It will mobilize clerics to issue rulings condemning ISIL's sedition, and line up endorsements from al Qaeda's loyal field commanders. ISIL is doing the same thing on its side.

Zawahiri and his colleagues holed up in Pakistan will want to be seen as having influence, but the fact is that they are distant observers with only limited ability to affect the situation on the ground. Infighting weakens the organization, and a weakening organization encourages more infighting. Zawahiri will have great difficulty extricating al Qaeda from this vicious circle.

Jenkins is senior adviser to the RAND president and the author of “Al Qaeda in Its Third Decade: Irreversible Decline or Imminent Victory?” “Dynamics of Syria's Civil War” and “Brothers Killing Brothers: the Current Infighting Will Test al Qaeda's Brand.”

This commentary originally appeared on thehill.com on April 25, 2014.