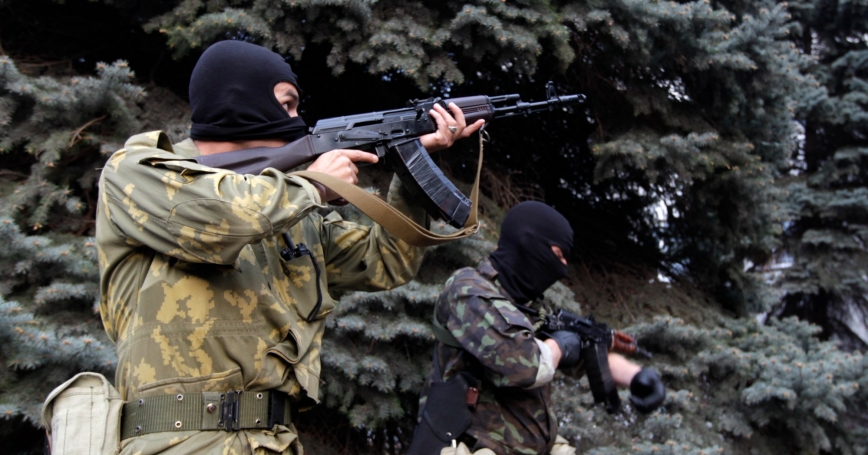 by Daniel Gonzales and Sarah Harting

Large numbers of Russian forces are poised along the Ukrainian border and, according to the NATO commander, could be ready to conduct a full-scale invasion of Ukraine at a moment's notice. An unknown number of armed Russian-speaking “green men” are operating in eastern Ukraine. Russia is reportedly attempting to destabilize Ukraine, perhaps to invade the country prior to its May 25 elections.

These “green men” may be leading the takeover of government buildings in eastern Ukraine, but many press reports in the United States and Europe are calling pro-Russian forces “separatists” and “rebels.” The implication is that all these protestors are native Ukrainians, when, in fact, many may be Russian troops and agents that have infiltrated into Ukraine by crossing the border. The Russian propaganda machine is in full operation, leading to confusion and uncertainty about what is actually going on.

It is paramount that U.S. and European officials and the people of Ukraine understand the true situation on the ground and the extent of covert Russian operations in eastern Ukraine. This is important not only to counter Russian propaganda that is finding its way into the Western press, but also to counter its effects on the Ukrainian people.

There are options for monitoring the situation in the country and for detecting the movement of people, weapons and supplies across the border with Russia that do not require deploying military forces or releasing sensitive information. The U.S intelligence community has undoubtedly been monitoring events and keeping senior U.S. officials informed, but it is not clear if this information is being shared with European allies and the Ukraine government. New technologies have been developed to enable information filtering and sharing between the Department of Defense and U.S. law enforcement officials for U.S. border surveillance. These technologies could be applied in Ukraine.

Prior to the annexation of Crimea, irregular Russian troops wearing masks and uniforms with no insignia streamed into the region and closed its borders. The Russian takeover of Crimea was successful at least in part because it was swift and bloodless. It took only a weekend and presented Western leaders with a fait accompli. One reason events transpired so quickly was that Western intelligence agencies were caught off guard: A covert Russian presence in Crimea may have laid the groundwork for a swift takeover. NATO commander and U.S. Air Force General Philip M. Breedlove believes an invasion of eastern Ukraine could be accomplished nearly as quickly as in Crimea.

Ukraine also suspects Russian involvement in cyberattacks against government websites and mobile phones used by members of parliament. The fear is that Russian President Vladimir Putin will use this internal instability and confusion as a pretext for an invasion, under the auspices of protecting ethnic Russians from violence.

Originally developed to support operations in Afghanistan, new U.S. surveillance, information filtering and sharing capabilities could be used to monitor the Ukrainian border to detect intruders and arms smugglers and to provide early warning of a Russian invasion. If this information is carefully filtered, it can be shared with Ukraine, NATO and possibly the public. Releasing proof that Russian troops and weapons are being covertly moved into Ukraine could build support for more economically painful sanctions to be applied to Russia.

The United States can also provide Ukraine with cyberdefense capabilities that can be used to protect Ukrainian critical infrastructure and assist investigators in determining the source of cyber intrusions.

Dan Gonzales is a senior scientist and Sarah Harting is a project associate at the nonprofit, nonpartisan RAND Corporation.

This commentary originally appeared in U.S. News & World Report on April 28, 2014. Commentary gives RAND researchers a platform to convey insights based on their professional expertise and often on their peer-reviewed research and analysis.