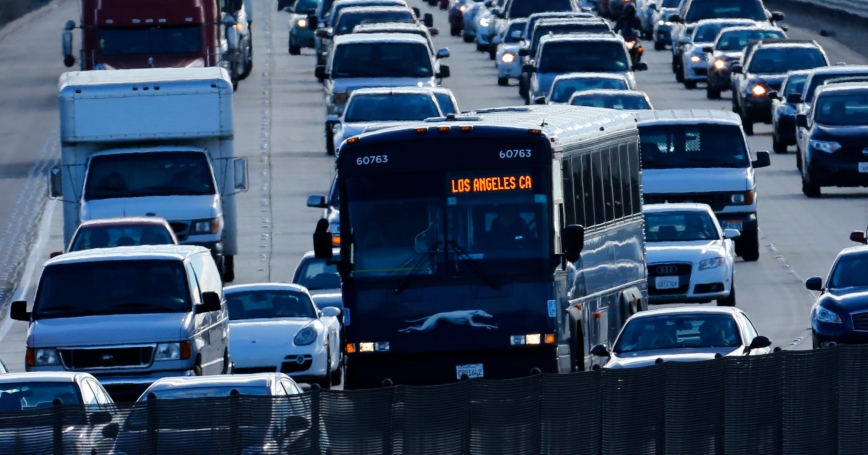 For the past year, Los Angeles residents have used, seen or heard about the high-occupancy/toll lanes on 14 miles of the Interstate 10, the San Bernardino Freeway east of downtown, and 11 miles on the Interstate 110, the Harbor Freeway, south of downtown.

Carpools and buses use them for free, while those driving alone can bypass congestion on adjacent lanes by paying tolls via electronic transponders. Tolls change with congestion levels, ranging from 25 cents to a maximum of $1.40 per mile.

Modeled after the successful and popular 91 Express Lanes in operation since 1995 between Orange and Riverside counties and funded with a grant from the federal government, the L.A. County lanes have been a “demonstration project,” or temporary experiment, through a partnership of the Los Angeles County Metropolitan Transportation Authority and Caltrans.

Thursday, the Metro Board will vote on whether to continue the lanes, making them a permanent part of the region's transportation system. The lanes have performed well in Southern California, and elsewhere in the U.S., and the program should be continued and expanded.

Because of their success, nearly 20 HOT lane projects are in operation, planning or construction around North America, and the case for HOT lanes is stronger in Los Angeles than in most other cities. There are limited funds to build new freeways and the high cost and prolonged disruption from major road expansions like the current project on I-405 are front page news.

HOT lanes carry more people with less delay than other lanes, and can be added at lower cost and disruption than most alternatives. An independent consultant to the Federal Highway Administration issued a report last week showing that these lanes have improved transit service and given drivers more choices. Unlike other new highway lanes, they also raise needed revenues for transit improvements from drivers voluntarily paying tolls. Most importantly, HOT lanes increase the choices available to travelers, who can drive in regular lanes for free, pay for faster and more reliable driving during rush hours, opt for the improved express bus service financed by the tolls, or join new toll-subsidized van pools.

The FHWA study found that during the short demonstration period, in addition to those already having them, nearly 260,000 new drivers were issued transponders. While average driving speeds changed only slightly in both the express lanes and general lanes during the peak hours, travel time reliability was a principal benefit for HOT lane users.

A total of 117 new vanpools were added to take advantage of the HOT lanes. During a well-publicized public comment period that included seven hearings and opportunities to comment by email, 670 comments about the HOT lanes were submitted: 58 percent were supportive, 25 percent were critical, and the remainder focused mostly on ways to improve the existing program. Some suggestions, like improving confusing signage, have already been adopted.

Critics have called these “Lexus Lanes,” believing that only the wealthy would pay tolls to reap the benefits. But the experience of the 91 Express Lanes in Orange County shows that drivers with a wide range of incomes choose to pay the tolls to save time. Metro was uniquely attentive to meeting the needs of low-income travelers when planning the HOT lanes, meeting frequently with residents of low-income neighborhoods to discuss the project.

In response, Metro lowered the cost of transponders for qualifying drivers. Those who depend on transit service now have more bus options than they did before the project.

The first HOT lanes in L.A. have improved traffic flow and travel time reliability, are fair to users of the facilities, have improved transit service and have generated revenue needed to fund those improvements from voluntary toll payments. The lanes are a cost-effective innovation that should be continued and expanded.

Martin Wachs is professor emeritus at UC Berkeley and senior principal researcher at the nonprofit, nonpartisan RAND Corp. Brian D. Taylor is professor of Urban Planning and Director of the Institute of Transportation Studies at UCLA.

This commentary originally appeared in Los Angeles Register on April 22, 2014. Commentary gives RAND researchers a platform to convey insights based on their professional expertise and often on their peer-reviewed research and analysis.