Are We Entering a New Era of Cannabis Regulation? 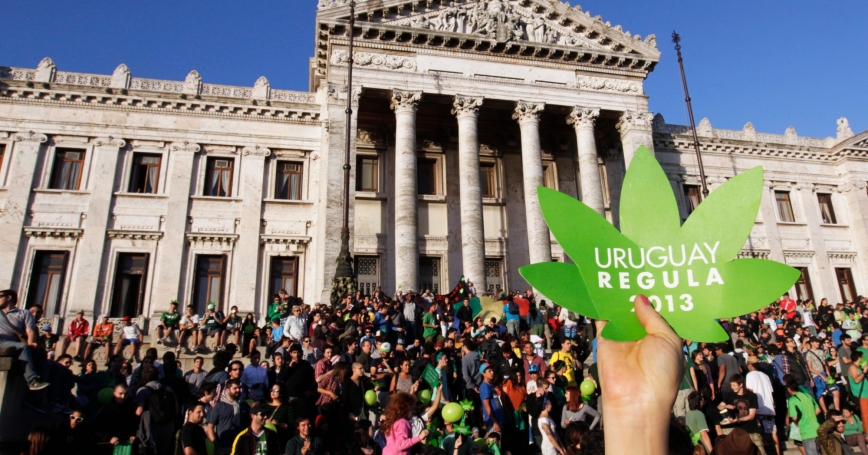 People participate in the so-called "last demonstration with illegal marijuana" in front of the Congress building in Montevideo, Uruguay, December 10, 2013

by Kristy Kruithof and Mafalda Pardal

Throughout the world, cannabis legalisation advocates and opponents have been following the recent debates and developments in the United States (Colorado and Washington state) and Uruguay with great interest. Although international drug treaties prohibit the production, distribution, and possession of cannabis for non-medical and non-scientific purposes, several jurisdictions have implemented new laws and policies, including some that remove criminal penalties for possession of small doses of cannabis. Colorado, Washington state, and Uruguay are taking these changes a few steps further by fully legalising the commercial production and sale of cannabis. In other countries, non-commercial models of production and distribution have also been developed, albeit operating in a grey or illegal zone.

In this context, the Research and Documentation Centre (WODC) of the Dutch Ministry of Security and Justice commissioned RAND Europe to provide a multinational overview of cannabis production regimes. With this study we aimed to improve the understanding of the current production regimes for non-medical and non-scientific purposes, and how these are shaped and/or supported by official pronouncements and/or legal decisions. Following an initial scoping review and in consultation with several drug policy experts, four countries were selected for a more in-depth review: Spain, Belgium, the United States, and Uruguay.

In Spain, Cannabis Social Clubs (CSCs) have been operating since the early 1990s. These clubs produce and share cannabis among their members, both for medical and non-medical purposes. While hundreds of clubs are estimated to be active in the country, the national legislation is ambiguous with regard to the legitimacy and legality of the CSCs. In fact, while jurisprudence in the field has tended to interpret the existing legislation in a way that permits “shared consumption” and cultivation for personal use when grown in a private place, there is no additional legislation or regulation defining the particular regime within which cultivation could be permitted. The introduction of such legislation has been discussed on several occasions both at a national and regional level, but this has not resulted in a change of national policy or law. The legal uncertainty around production by and distribution within the CSCs has led to the seizure of cannabis crops and to the arrest of some CSC members.

Whilst CSCs have been present in Spain for almost twenty years, the first Belgian CSC was established in 2006. Since then, three more clubs have followed, with the first one, called “Trekt Uw Plant” (“Pull Your Plant”), consisting of around 300 members in 2013. The establishment of Trekt Uw Plant followed a 2005 joint guideline, issued by the Minister of Justice and the College of Public Prosecutors, which assigned the lowest possible priority to prosecution for possession of up to three grams of cannabis or one cultivated cannabis plant. Within this context, the club decided to collectively grow cannabis in spaces that are not publicly accessible, allowing one plant per member. Contrary to the Spanish jurisprudence, the two court cases against Trekt Uw Plant did not focus on the (il)legality of the acts of the whole club as such. Although the issue of legal regulation of cannabis production has been raised by academics and professionals recently, this issue has not been subject to formal discussion or consideration to date. Hence, cultivation of cannabis is currently still illegal under Belgian drug law.

In January 2014, the first cannabis retail stores in Colorado opened following the legalisation of cannabis in this state in 2012. Stores in Washington are expected to open in mid-2014. This change was the result of a direct vote by the citizens of those states. Once passed, this so-called voter initiative became state law. In general, both states allow private businesses to operate at three distinct market levels: growing, production/processing, and retail sale of cannabis. The significant change involves large-scale for-profit activity as licensed and regulated by state agencies. However, as state law does not negate or supersede federal law, all cannabis related activity remains prohibited throughout all states under federal law. Nonetheless, a memorandum to federal prosecutors indicated that a business that follows state law and regulations, and which does not thwart any of the federal priorities, would not be likely to be prosecuted by the federal government. Furthermore, whilst the UN International Narcotics Control Board (INCB) indicated that the developments in the United States would be a violation of international law, this particular issue was subject to little public discussion by federal officials.

Uruguay has recently become the first country to legalise and regulate production and sale of cannabis for non-medical and non-scientific purposes, following intense debate and attended by critique from the INCB. The new legislation enables licensed firms to produce cannabis for medical and non-medical purposes, which will then be sold at authorised pharmacies. In the case of cannabis for non-medical purposes, supply shall not exceed the limit of 40 grams per user per month. Sale to minors is not allowed, and as with tobacco, advertisement is also not allowed (regulations pertaining to smoke-free public places will be enforced with regard to cannabis as well). Home production for personal use (up to six plants) and cannabis clubs (with 15 to 45 members, and a maximum of 99 plants) are also permitted under the new legislative framework. A new agency, the Institute of Regulation and Control of Cannabis, will maintain registries for users, home producers, and those participating in collectives.

The review of these four countries' cannabis production and distribution regimes for non-medical and non-scientific purposes allowed us to identify a number of distinguishing features. While in Belgium and Spain there is covert distribution within CSCs, in Colorado, Washington, and Uruguay this will take the form of an overt marketplace, with Uruguay allowing cannabis clubs as well. Furthermore, Uruguay is the only country regulating the legalised production and sale of cannabis at the national level. Finally, there are also important differences in the role government employees do or do not play in production and distribution. In Belgium and Spain, there is no role for government employees. In Colorado and Washington, their role is indirect, in the form of licensing and regulating, but not participating in the trade.

While the international drug treaties remain unchanged, a number of countries have discussed or implemented alternative cannabis regimes. At a time when the American commercialisation model seems to be gathering momentum, our study illustrates that this is not the only alternative to cannabis prohibition.

Kristy Kruithof and Mafalda Pardal are both researchers at RAND Europe, a policy research institute. They are co-authors of the report, Multinational overview of cannabis production regimes, commissioned by the Research and Documentation Centre (WODC) of the Netherlands Ministry of Security and Justice.

This commentary originally appeared on The BMJ on May 22, 2014. Commentary gives RAND researchers a platform to convey insights based on their professional expertise and often on their peer-reviewed research and analysis.