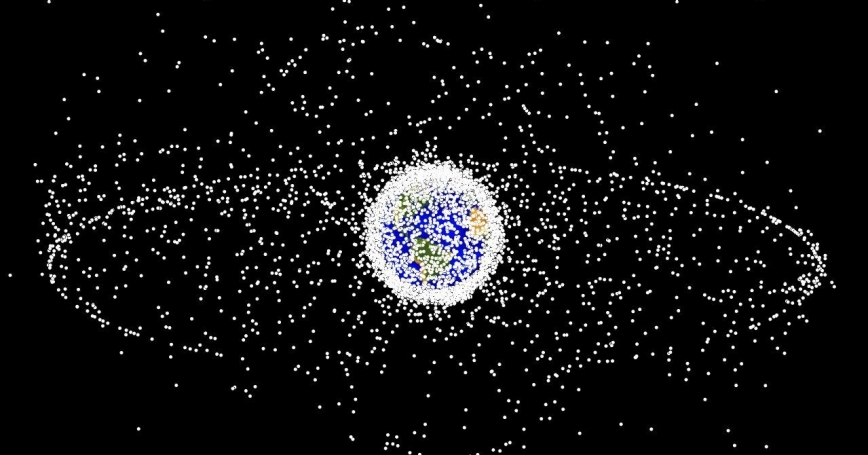 A computer-generated image of objects in Earth's orbit

In the early days of the Space Age, launching and operating a satellite was a lot like driving on an empty Texas Motor Speedway: Satellite operators didn't have to worry about traffic because there weren't that many other vehicles in the way.

Today, every satellite launch and maneuver is carefully coordinated because some orbits are strewn with the space-based equivalent of blown tires, abandoned vehicles, loose gravel and, of course, other traffic.

The fact is that Earth's orbit is littered with hundreds of thousands of debris objects larger than a centimeter. With orbital speeds that can exceed 17,000 miles per hour, even a small grain of sand can spell doom for an active satellite.

Debris therefore poses a real threat to our continued use of space in the most popular orbits.

The increased congestion in space is made more dire by the fact that the number of people who rely on space for communication, commerce, weather and navigation is increasing at a dizzying rate.

For example, in December 1994, the satellite TV market had 570,000 customers. Today, that number has grown to more than 35 million.

What is being done to mitigate the risk posed by debris? It depends on who you ask. Space-faring nations and commercial space firms have risk tolerances that typically align with their dependency on space. Those countries or companies that depend heavily on their space assets are more likely to be aware of the risk — and take steps to address the problem.

At an international level, the authority is the United Nations' Committee on the Peaceful Uses of Outer Space, which boasts participation of 76 space-faring, UN members.

All actions related to managing the debris problem are either preventative in nature and occur prior to launch (tethering removable lens caps, improving spacecraft shielding) or reactionary (maneuvering satellites to avoid debris, avoiding operation in debris-dense orbits).

Yet, if the near-Earth space environment is to be preserved, most experts argue that more active measures to remove debris need to be taken, and sooner rather than later.

That may be easier said than done. There are two significant hurdles that the international community needs to overcome before active measures can be pursued: developing an effective yet economical debris-removal technology and settling on an amenable policy governing the use of this technology.

The international community's ability to clear the first hurdle is mostly tied to there being sufficient resources available for the task.

It is almost certain that an appropriate technology could be developed and deployed given the participation of world technological leaders and enough monetary resources.

The second hurdle poses a bigger challenge: designing a policy construct, amenable to all space-faring parties, which would minimize concerns that the technology could be misused. Without such measures, one country's garbage truck is likely to look a lot like an anti-satellite weapon to another.

Despite these difficulties, the international community must act to address both challenges by developing necessary technologies and exploring policy options for exercising them.

In fact, the policy regime should be of primary concern because technologies born independent of practical policy considerations may ultimately prove inadmissible by the international community.

As citizens of the world continue to become more reliant on the services that space systems provide, it is time for space-faring nations and firms to pay collective attention to the risks and policies associated with preserving the space environment.

In the end, the hard part of the space debris problem likely won't be about building the space-based garbage truck, but about getting everyone to agree on how it will be used.

William Welser IV is director of the Engineering and Applied Sciences department and a senior management systems analyst at the nonprofit, nonpartisan RAND Corp. Dave Baiocchi is a senior engineer at RAND and a professor at the Pardee RAND Graduate School.

This commentary originally appeared on Houston Chronicle on May 15, 2014. Commentary gives RAND researchers a platform to convey insights based on their professional expertise and often on their peer-reviewed research and analysis.