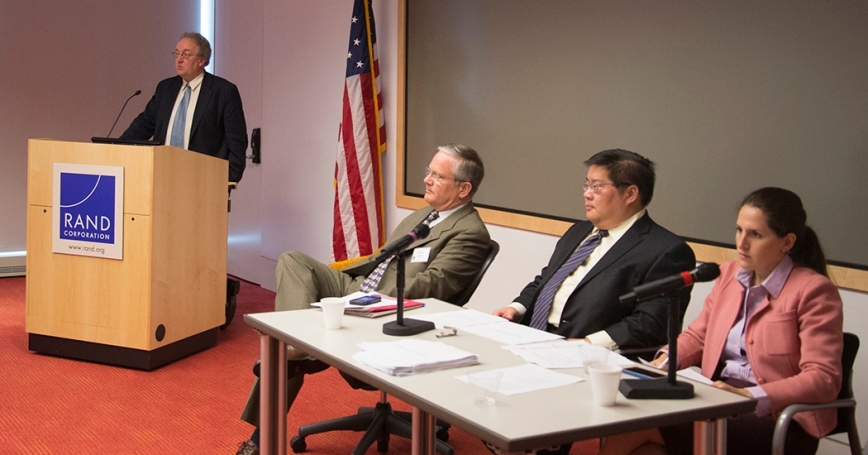 by Cortez A. Cooper III and Andrew Scobell

Despite international concerns about an increasingly assertive China and hawkish People’s Liberation Army (PLA) manifest in a variety of issues, including territorial disputes, there has been little systematic assessment of whether Chinese military strategy is changing. On April 30, experts, scholars, and government analysts gathered at RAND Corporation offices in Arlington, Va., to evaluate changing Chinese strategic thinking on threat perceptions, doctrine, and strategic concepts for employing military power to advance national goals.

Sponsored by the Tang Institute for U.S.-China Relations, the half-day conference featured four high-level panels highlighting a number of papers presented at the CAPS-RAND-NDU Conference on the People's Liberation Army held last November in Taipei, Taiwan.

Of particular note was a fascinating panel on Chinese understandings of deterrence both within particular domains—nuclear and cyber—and across domains. Presenters noted that while deterrence is a relatively new strategic and operational concept for the PLA it has become increasingly important one that requires careful analysis. Presenters cautioned against assuming that the United States and China had a common understanding of what deterrence entailed and how a country could effectively employ it.

The conference emphasized a central theme of both continuity and change for the Chinese military. The panelists drew from historical and recent strategic documents and speeches, such as the 18th Party Congress work report and China's April 2013 defense white paper, to stress continuity in PLA thinking and continued fealty to “peaceful development.” They also discussed indications of significant new thinking going on within the PLA and in the broader Chinese strategic community about how to define and defend China’s expanding national interests and how the PLA can best use its growing capabilities to advance national goals. New military capabilities are certainly increasing the options available to Chinese leaders, with potential impact at the tactical, operational, and strategic level.

Cortez A. Cooper III is a senior international policy analyst and Andrew Scobell is a senior political scientist at the nonprofit, nonpartisan RAND Corporation.