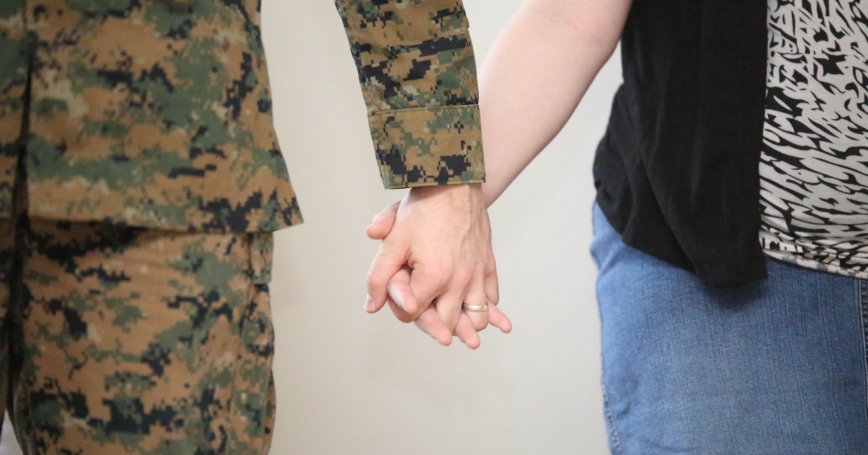 I never thought of myself as a caregiver. And until I read Hidden Heroes: America's Military Caregivers, I had no idea that there are more than a million people like me, caring for a loved one wounded in Iraq or Afghanistan. While I know that my story — like every caregiver's — is unique, it led me to wonder how many military caregiver experiences are variations on the same theme.

“I know exactly what I'm getting into, and I choose to be with you,” I said to Brian, the man who would become my husband within months. He was trying to convince me that we shouldn't be together, admitting his fear that the penetrating traumatic brain injury (TBI) he had suffered in Iraq and the post-traumatic stress disorder (PTSD) that had followed would lead him to ruin my life if we stayed together. I was trying just as hard to reassure him that as a fellow soldier I was tough enough to handle it, and loved him deeply enough to try.

It was a lie, though: I had no idea what I was getting into.

We'd met in Iraq in May of 2003, and I'd confessed my interest a few months later — not long before the roadside bomb drove shrapnel through his skull and nearly killed him in October of that year. At first they warned us that he would likely die, then cautiously upgraded that assessment. The neurosurgeon believed he would never be functionally independent, that he might never even walk. Inexplicably, he recovered enough that they released him from Walter Reed Army Medical Center after around three months, assuming he was well enough to live on his own. Brian was back at Fort Campbell when the rest of the 101st Airborne Division got back from the Middle East in February 2004; we started dating then and married a year later.

By the time we wed, I knew Brian needed help that the Army wasn't giving him. Cognitive deficits prevented him from working or managing his household finances. PTSD symptoms sent him into violent rages. Depression left him motionless on the couch. Lack of proper treatment drove him to seek to numb the pain with alcohol. If I didn't leave the military and dedicate myself to helping him, I feared he would end up homeless or dead. But somehow, I convinced myself, with me by his side Brian would be able to overcome all these challenges and thrive once more; love would be enough to sustain us. We got him sent back to Walter Reed for more care, and I joined him there after leaving active duty. Completely ignorant about TBI and PTSD, I dove into the effort to get him adequate care, disability benefits, and a future. But the financial and emotional strain took a toll: I frequently felt depressed, panicky, and overwhelmed. If there were resources to help me, I never heard of them.

Slowly, after a number of false starts and marital crises, my faith and persistence paid off. Brian got a job stocking shelves at a sporting goods store, restoring his confidence and teaching him new skills. His alcohol abuse waned and he learned to manage his PTSD symptoms. We sought counseling both together and separately. Eventually, he was able to find meaning by joining together with other veterans to advocate for improvements in the systems and services available to other wounded warriors, seeking to ensure they did not encounter the same gaps and barriers he did. Today, our marriage is strong, we are raising two wonderful children, and he has recovered enough to begin using his GI Bill benefits to attend college. We have found a “new normal” in which we lead fulfilling lives.

We are incredibly lucky that right now Brian does not need me to help him with activities of daily living — though we do not know what the future may hold: his PTSD symptoms could worsen again, and he is at increased risk of developing early onset dementia due to the TBI. I am also currently healthy, and we have good health insurance. Others may not be so fortunate. The RAND report made me worry about other couples facing declines in the wounded warrior's or the caregiver's health or struggling with access to medical care because they lack health insurance.

The landscape for caregivers remains very difficult. Many still need additional training on how to best provide care for their loved ones, respite so they can care for themselves, and other forms of support. And — perhaps most critical of all — caregivers need to plan for the eventuality when they may no longer be able to provide needed care. While there have been tremendous improvements in the programs available to help wounded warriors, the same is not necessarily true for caregivers. By detailing the current landscape, this study points the way to recognizing caregiver needs and targeting the services they need most. My own story is unusual — very few who sustain injuries as severe as Brian's will experience the degree of recovery that he did. This groundbreaking research details the way in which these hidden heroes continue to serve those who have sacrificed so much for all of us and how with proper services and supports, other families can find their own “new normal.”

Kayla Williams is a project associate at the RAND Corp. and author of the recently released “Plenty of Time When We Get Home: Love and Recovery in the Aftermath of War.”

This commentary originally appeared on Blue Star Families on May 6, 2014. Commentary gives RAND researchers a platform to convey insights based on their professional expertise and often on their peer-reviewed research and analysis.