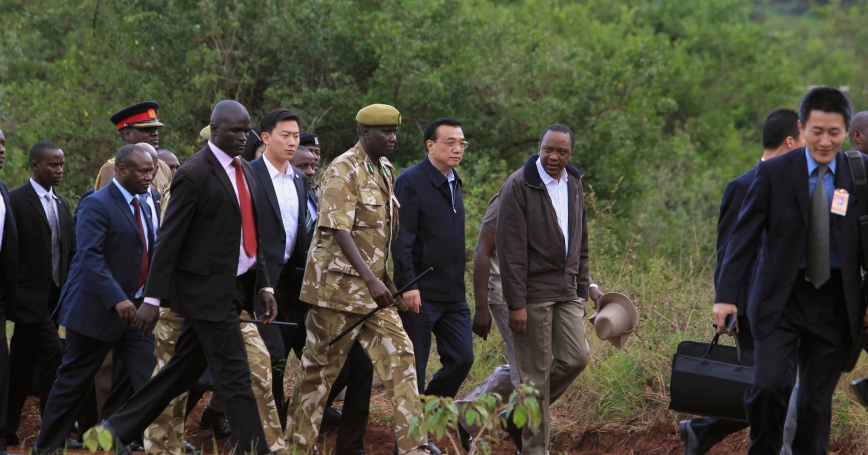 Secretary of State John Kerry and Chinese Premier Li Keqiang both made high-profile visits to Africa within a week of each other this month. Kerry sought to resolve the continuing violence in South Sudan and the Central African Republic, Li came bearing aid and investment deals.

The United States could learn something from Beijing's economic playbook.

The two leaders' agendas could not offer a more vivid picture of the different priorities that each power pursues in Africa. Washington plays regional peacemaker, while Beijing focuses intently on its long-term economic interests.

China's two-way trade with Africa, for example, has grown by 30 percent a year over the last decade. It is now Africa's largest trading partner (PDF), importing largely natural resources. More than 85 percent of China's imports from Africa consist of petroleum, copper, iron, and other raw materials needed to build China's growing domestic infrastructure and fuel its continued economic growth.

Meanwhile, U.S. engagement in Africa is dominated by security issues — particularly counterterrorism, counter-piracy and efforts to resolve internal conflicts. During Kerry's trip to Ethiopia, Angola and the Democratic Republic of Congo, he embarked on an ambitious security-related agenda aimed at promoting democratic elections; combating al Qaeda in east Africa, and ending violence in South Sudan, eastern Congo and the Central African Republic.

Li visited two of the same countries (Ethiopia and Angola) the next week, as well as Kenya and Nigeria, to pledge $12 billion in development loans to African nations and sign 60 agreements to invest in local energy and infrastructure projects.

During Li's visit to Kenya, for example, China offered a $3.8 billion loan to build a railway link between Kenya's Indian Ocean port of Mombasa and Nairobi. The first stage of the line would link neighboring Uganda, Rwanda, Burundi and South Sudan, increasing intra-regional transportation networks and trade that are crucial for Africa's economic growth.

This $12 billion in credit adds to the $20 billion in loans that then-Chinese President Hu Jintao promised to African nations in 2012. Good-government advocates have pointed out that African governments often use Chinese loans for vanity projects or other economically inefficient ends — regularly leaving the state on the hook to repay debt that failed to generate economic benefits. Nonetheless, China's offer demonstrates the scale of its economic involvement in the continent.

Washington does little to promote U.S. trade and investment in Africa — particularly when compared to Beijing. The U.S. Overseas Private Investment Corporation, which encourages investment in emerging markets through financing, loan guarantees and political risk insurance, has dedicated just $6.3 billion to support U.S. investment in Africa since 1974. Meanwhile, the U.S. Trade and Development Agency has provided only $90 million since 1981 — roughly $3 million per year — to facilitate U.S. business in Africa.

Differences in the China and U.S. trade figures in Africa also underscore the countries' divergent priorities. Sino-African trade volumes, negligible in 2000, hit $198.5 billion in 2012. By comparison, U.S.-Africa trade in 2012 was half that, reaching roughly $100 billon. Trade between China and Africa, meanwhile, is estimated to hit $280 billion by 2015, according to Standard Chartered research.

Chinese imports from Africa overwhelmingly consist of natural resources, sparking strong criticism that China is seeking to “lock up” Africa's resources (PDF). Washington is seeking to promote the export of African manufactured goods — with policies like tariff waivers under the African Growth and Opportunity Act. Yet U.S. trade with Africa is also dominated by oil and gas. In 2011, for example, natural resources comprised roughly four-fifths of both countries' total imports from the continent.

Obama also announced a new trade initiative, Trade Africa, developed to increase U.S. exports to five East Africa nations by 40 percent. The initiative also helps promote increased intra-regional trade among these countries. Few concrete steps toward implementation have been taken, though, arousing skepticism that Washington is not serious about the follow-through.

Africans require both security and economic growth. Global powers like China and the United States do not need to choose between the two when focusing their foreign policy efforts. Even as Beijing pursues its economic agenda in Africa, for example, China has also begun contributing to regional security — providing troops to United Nations peacekeeping missions and participating in multinational naval patrols to combat piracy off the Somalia coast.

Similarly, as Washington seeks to defuse conflict and reduce security threats across the continent, it should do far more to promote trade and investment in ways that benefit both U.S. business and African economies. By supporting Africa's economic and commercial development, greater U.S. business engagement can also strengthen security and stability throughout the region.

Larry Hanauer is a senior international policy analyst and Lyle Morris is a project associate at the nonprofit, nonpartisan RAND Corporation.

This commentary originally appeared on Reuters, The Great Debate blog on May 30, 2014. Commentary gives RAND researchers a platform to convey insights based on their professional expertise and often on their peer-reviewed research and analysis.