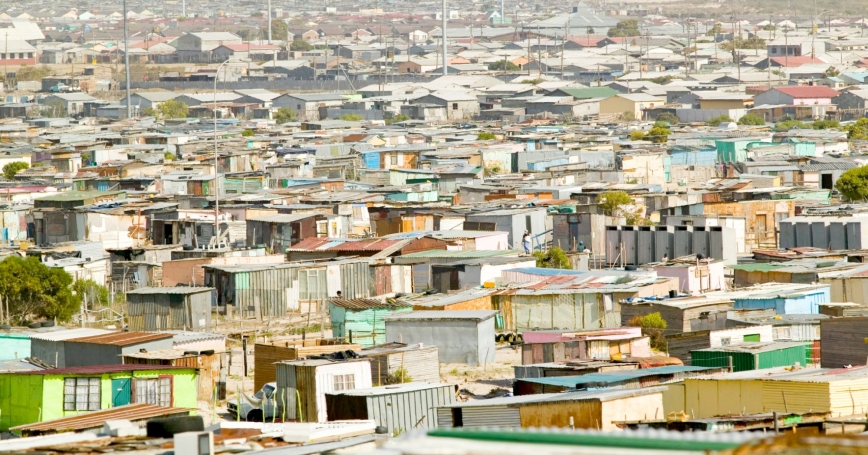 South Africans go to the polls today, marking yet more milestones for their transforming nation: It will be 20 years since apartheid ended and the country's first democratic elections brought the African National Congress (ANC) to power. This also will be the first national electoral contest after the death of South Africa's great leader Nelson Mandela.

And while much has changed, many challenges remain, including the developing nation’s dire need for housing.

A drive around Cape Town, the nation's second most populous city, reveals a metropolis of stark contrasts. Between the picture-book mountains, beaches and vineyards lie sprawling shantytowns with shacks put together from corrugated iron, plywood, and cardboard.

In such desperate conditions, largely absent good water, plumbing, and sanitation, 13.6 percent of South African households (PDF) still live. While census data show a steady increase (PDF) in the percentage of households with formal housing, the number of South Africans living in shacks grows in some cities, largely due to rapid migration and urbanization.

The nation's constitution (PDF) says South Africans have the right of access to adequate housing and that children have the right to shelter. It requires the government to take reasonable measures to ensure the “progressive realization” of these rights “within its available resources.”

In 2000, when the government evicted Irene Grootboom and others who had put up a shantytown on a private sports field earmarked for formal, low-cost housing, the Constitutional Court found that the government had not met its obligation to provide them with shelter. While the landmark Grootboom ruling asserted that socio-economic rights are enforceable, it nonetheless conceded that the question of how they should be enforced is difficult. The court allowed that this issue needs to be explored carefully on a case-by-case basis.

The two largest political parties have taken different approaches to housing. After coming to power, the ANC established the Reconstruction and Development Program, which had as one of its goals to build low-cost housing for the poor.

The ANC now governs eight of nine South African provinces and promises to build or buy free-standing houses for households earning less than R3,500 (about U.S. $330) per month. That's about 60 percent of the population. The government offers extended housing subsidies to households earning between R3,500 and R15,000 per month.

Delivering on its housing promises has proved difficult for officials, given limited budgets, shortages of appropriate land, and various other difficulties (PDF). The government, for example, has found itself spending five times the annual housing budget to repair homes that did not comply with building regulations.

The provincial government in the Western Cape, the lone province controlled by the Democratic Alliance (DA) party, has taken another course. It promises to provide more limited assistance to four times as many people at the same cost, but leaves it to individuals to build their own houses. (See here (PDF).) Its program offers to provide plots of land with full legal title and basic services; upgrade and service land already occupied; provide rental housing; or subsidize community-driven housing developments.

These options have increased access to water, plumbing, toilets, and trash collection. But some residents have said they felt cheated out of the “free” house they expected; others have let properties decay, presuming they will get new homes soon.

The many-options approach also has put the DA on the wrong side of the courts at least once. When the DA-led City of Cape Town provided households in the Makhaza shantytown individual toilets, leaving it to families there to enclose their own facilities, 1,265 of them did so, but 51 did not. The sight of open-air bathrooms caused an outcry. The Western Cape High Court ruled that the province had violated the right to dignity.

The results of these local races in the Western Cape could well be a reflection of voter attitudes toward the different approaches on housing by the two parties.

Julia Pollak is an assistant policy analyst at RAND and a Ph.D. candidate at the Pardee RAND Graduate School. This blog was written for the Pardee Initiative for Global Human Progress.